I have something new to cross of my list of unusual things most people won’t experience: attend two wedding ceremonies for the same couple. But this is Peace Corps, and if something’s not unusual, it’s probably not worth doing. That’s a motto I’ve developed here and it probably explains why most PCVs return a little odd, if we return at all : )

But back to the weddings…Fiorina was one of the first people I met when I moved to Hawassa six months ago. And over the months, we talked a lot about this wedding! She married Rich, an RPCV who had been stationed in Hawassa the previous three years, but had returned to the United States a few weeks before I arrived.

They are such a beautiful couple and I loved sharing their special days with them. The first ceremony took place in Debre Zeit, just south of Addis on one of the lakes. It was so serene and the couple couldn’t have looked happier.

Despite a two-hour delay (this is Ethiopia, after all), the couple still managed to tie the knot : )

And then it was off to the reception! I just need to include this next picture to prove that despite being Peace Corps Volunteers, we still clean up pretty well!

We were able to stick around for dinner and a couple religious dances, but then had to head back to Hawassa before it got too late. But not before snatching a quick photo with the bride after an outfit change.

Three days later and it was time for the festivities to continue. This time we stayed in Hawassa, and if it’s possible, even more people attended. The couple certainly turned heads with their colourful ensembles.

This celebration was even more of a party than the first. Though that might also be because we were able to stay for the entire evening this time. The dancing went until close to midnight… 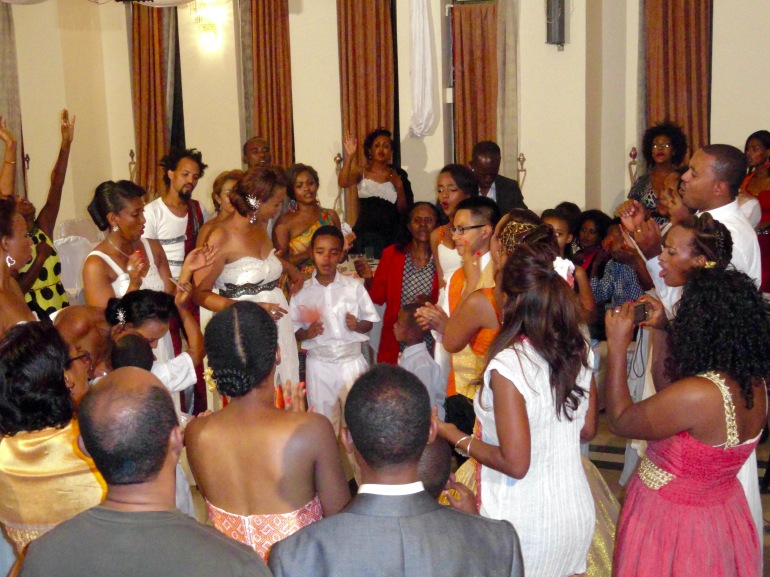 Couldn’t leave without one last photo with the bride and groom. We all had a blast and I’m so excited for Fiorina and Rich and their new life together.