I’ve never been a fan of early mornings, but I wanted at least one sunrise during our time in Siem Reap. Most people flock to Angkor Wat itself, but since we (read “I,” Chandler would have been content sleeping in) didn’t want to be surrounded by hundreds of other tourists, we made our way to Sra Srang instead. Sra Srang, also known as the Pool of Ablutions, was used by the king and his consorts.

Our alarms went off at 4:15 am – we used two in case the one couldn’t cut it – and were on our way by 4:45, breakfast in hand. Our tuk-tuk driver (yes, we down-graded, no more car!) drove us through the checkpoint, with no other vehicle in sight. We arrived at the pool to find that only one group (of three) had arrived before us. Throughout the course of the sunrise, we were joined by maybe a dozen others, but we felt perfectly content to snack away on our egg sandwiches and take in the sunrise.

I may never know what a sunrise over Angkor Wat looks like in person, but I have no regrets over our choice to head to Sra Srang instead… 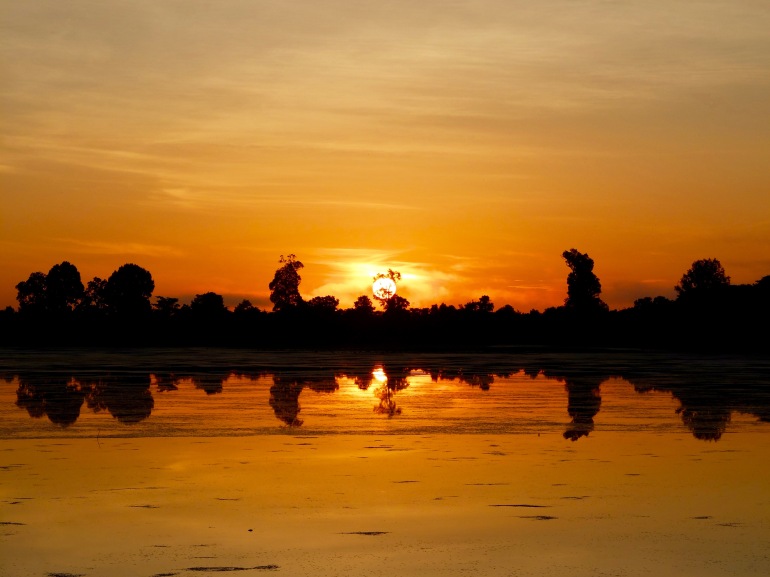 After the sun had risen too much to be looked at directly, we made our way across the street to Banteay Kdei, a Buddhist monastery built in the 12th century. The entrance is decorated with the four faces of Avalokiteshvara.

After passing through the doorway, we found ourselves in a completely deserted temple – the cleaning staff hadn’t even arrived yet to remove the previous night’s cobwebs! This was one of the most surprising temples for us. We hadn’t expected much past the gate, but we were pleasantly surprised to find that the temple just kept going. 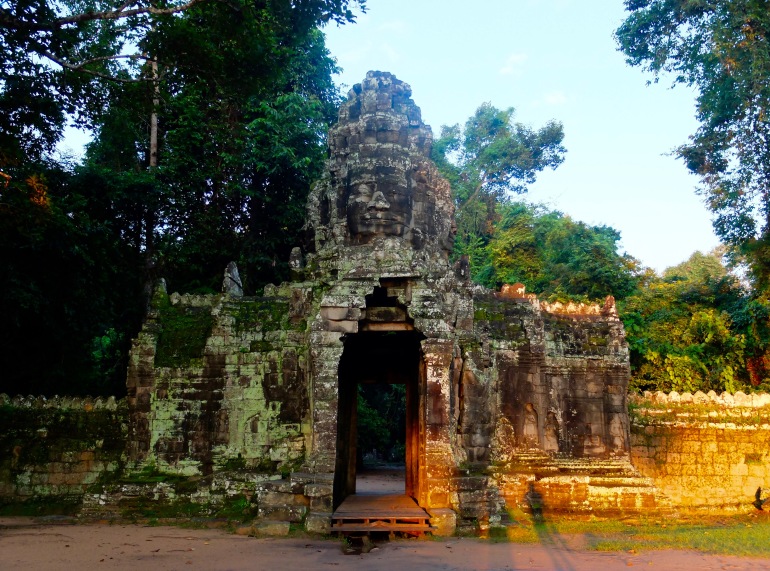 Things got a little interesting when we went back to our tuk-tuk driver. Technically, we were paying him to take us on the Grand Circuit, but we wanted to save Angkor Wat and Angkor Thom for the final day, so we had a slightly different route planned. Turned out it wasn’t as simple as that. Luckily, our driver was an affable man, and agreed to the change in route, for another $5 that is.

But we were more than willing to pay to get exactly what we wanted – and he hadn’t charged extra to take us at sunrise. So our $15 day turned into $20, but split between two people, that really isn’t bad. And maybe I should note that we got all our drivers through our guesthouse, Golden Takeo. Everyone was extremely friendly, and prices were definitely fair when we compared them to other hotels…we possibly could have gotten a better price had we bargained with someone on the street, but the combined $5 maximum that we would have saved just didn’t seem worth it.

We then set off for Pre Rup, which means Turning the Body and is thought to have been an early royal crematorium. Pre Rup was our first encounter with massive stairs…there are larger ones in some of the other temples, but we hadn’t gotten to those yet. Luckily, this early in the morning, we were still feeling pretty good once we had climbed them (as an aside, there is nothing even or level about these stairs! It’s pretty much like climbing up a ladder at points). I wish I could say the view from the top was worth it, but all you see is a sea of trees. It was still a very cool experience. 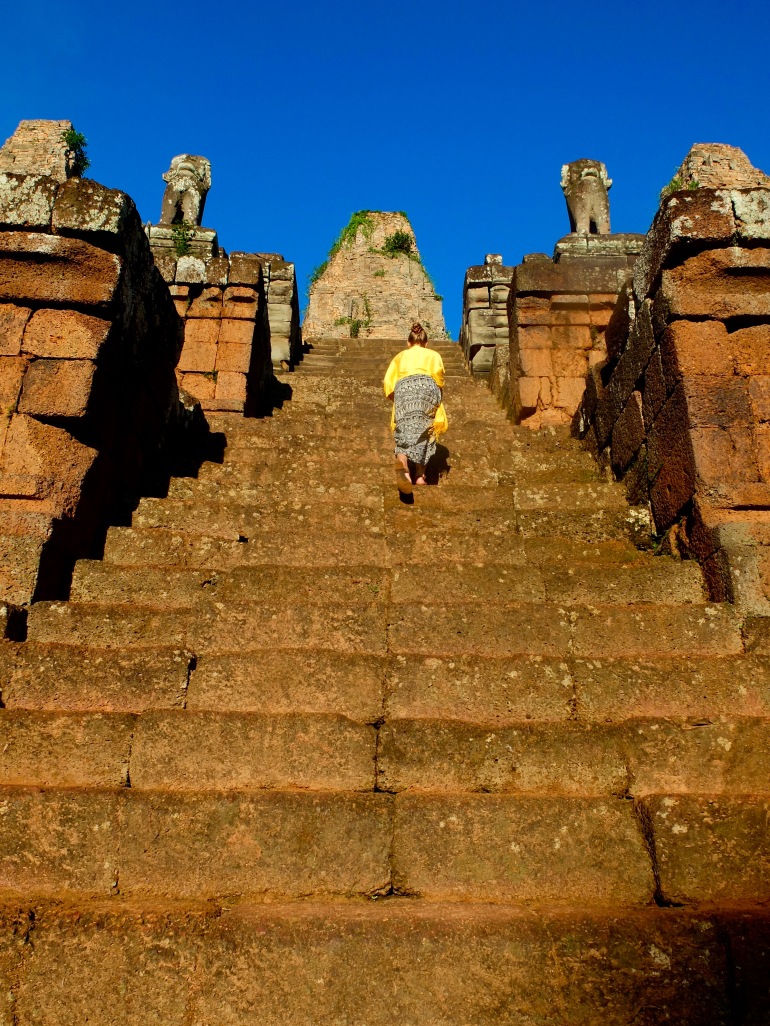 Afterward, we hopped back in our tuk-tuk and made our way to Eastern Mebon. It’s like a smaller version of Pre Rup, but it was built 15 to 20 years earlier. The base of the temple is guarded by carved stone figures of elephants, some of which are in surprisingly good condition.

We then decided we’d make a quick stop at Ta Som, most famous for the tree growing out of its eastern gate – only we almost missed the tree! We got so caught up looking at some absolutely stunning carvings. The tree itself is quite far past the temple itself, but definitely worth the trek. 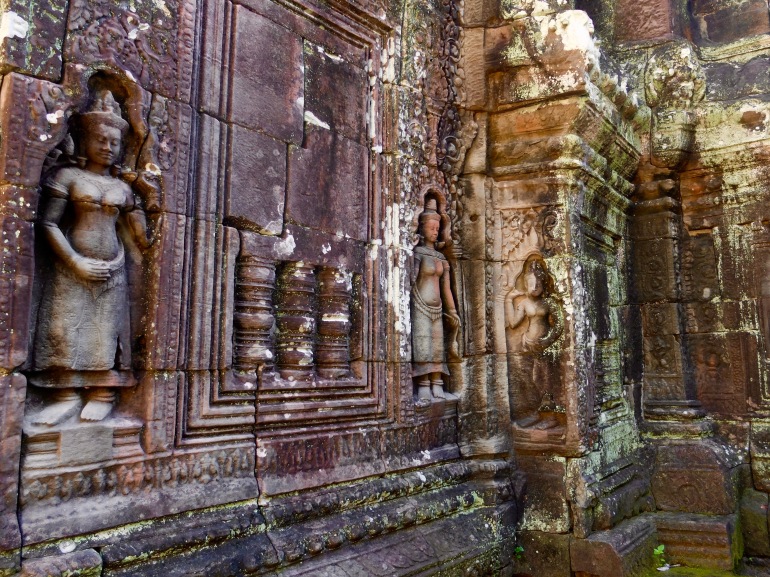 Next came Preah Neak Poan, a Buddhist temple also known as the Temple of the Intertwined Nagas. It is a large pool surrounded by four others and was used for ritual purification rites. Only nowadays, most of it is roped off and the most impressive aspect is the large walkway leading out to it (though the water on both sides looks a little putrid!).

We didn’t stay long and were soon off to Preah Khan. To be honest, we didn’t know much about this temple, I think we had plans on skipping it (or maybe that was Neak Poan?), but our driver stopped, and we figured, hey why not? The name means Sacred Sword and it’s definitely one of the larger temples. Apparently there’s a depiction of the Churning of the Ocean of Milk, but we didn’t see it (weren’t looking for it). What did captivate us was the tree at the back – much larger than the one at Ta Som.

This was the busiest temple we had been to so far, but interestingly enough, many of the visitors didn’t make it all the way to the back. The police were out in force though…not to stand guard, but to serve as a 60-second tour/photo guide and then ask for a tip. 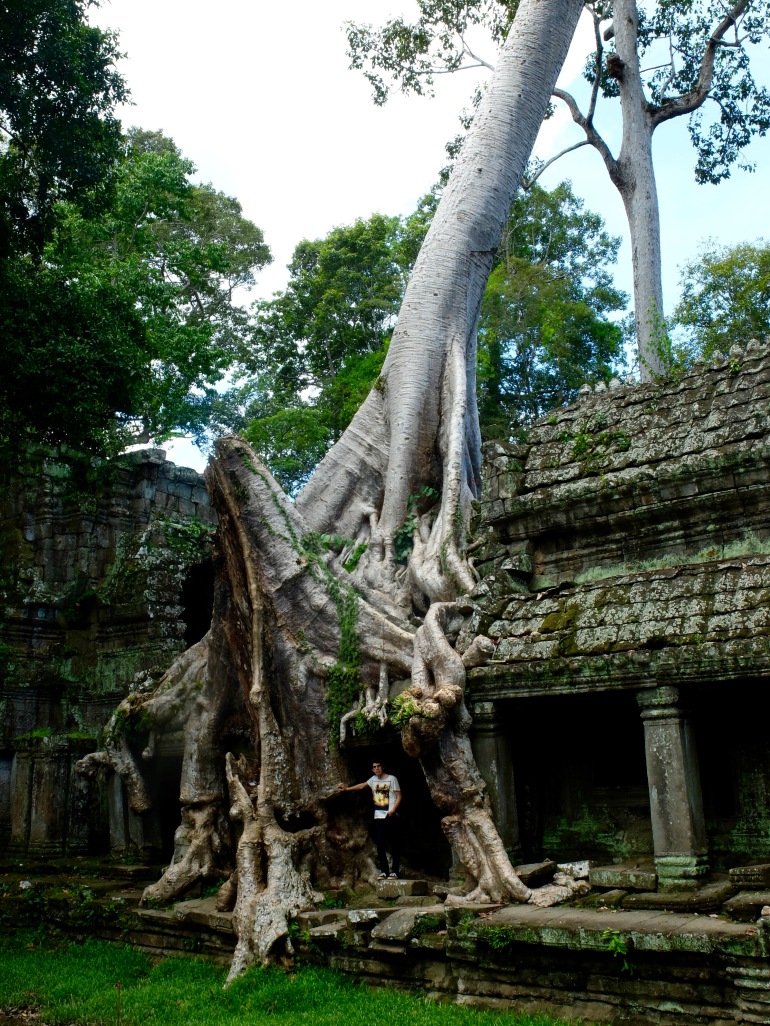 Afterward, we made our way to two smaller temples – Chau Say Tevoda and Thommanon. Both are lovely in their own right, and they’re right across the street from each other, so it’s silly to stop for one without checking out the other. They were built in the 12th century (or at least Chau Say Tevoda was!).

A lot of people drive right past these ones (all the tours do), so it was nice to have another quiet moment. The photo below is of Thommanon. 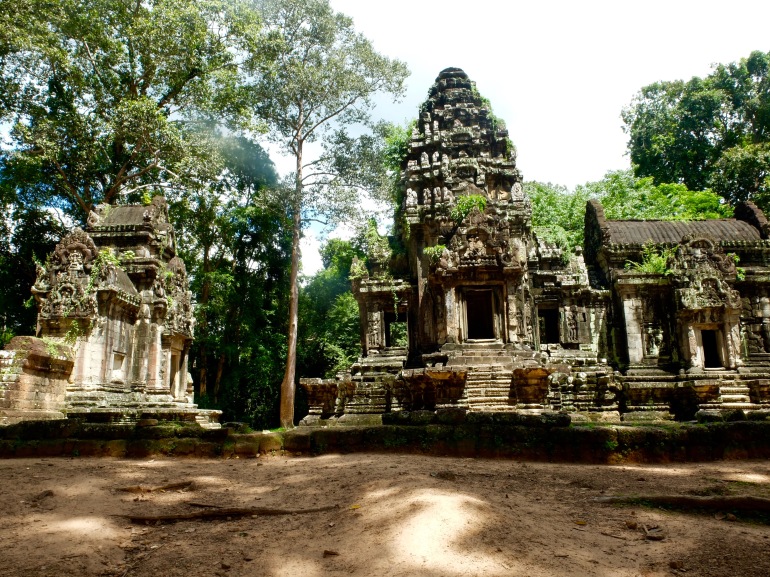 By now we were pretty tired and ready for a break, but we only had two temples left so we decided to push through. First was Ta Keo (our guesthouse’s namesake). It was the first monument of Angkor built entirely of sandstone and was actually never finished – one theory is that it was too difficult a stone to carve. Just as a heads up, this temple also has a crazy staircase – one that was much harder to climb come mid-day!

Our final temple of the day was Ta Prohm – and we were definitely excited for it. In case you didn’t already know, this is the temple where scenes from Tomb Raider were filmed. I was more excited because it’s known as one of the most atmospheric of the temples. And to be fair, it was indeed stunning, but if abandoned and overgrown is what you’re going for, Beng Mealea‘s your temple.

Ta Prohm does have an impressive collection of trees, many hundreds of years old. The wildest have been trimmed back, but it’s still lovely. The only downside was the shear number of people – and we were there during the lowest of low season. Ta Prohm is the most visited temple other than Angkor Wat and Angkor Thom.

What I’m really saying, is be aware of the crowds (we went during lunch time and while there were still a lot of people, none of the large tour groups were there). This is definitely a temple worth seeing, but it might not be as romantic as you expect. All-in-all, it was a great end to an absolutely spectacular day and left us practically in a tizzy of excitement for what was to come the following day.