It was a crisp, clear evening, not a cloud in the night sky. And while the boats, covered in candles, sparkled down the Mekong river, hundreds of paper lanterns were released into the sky. 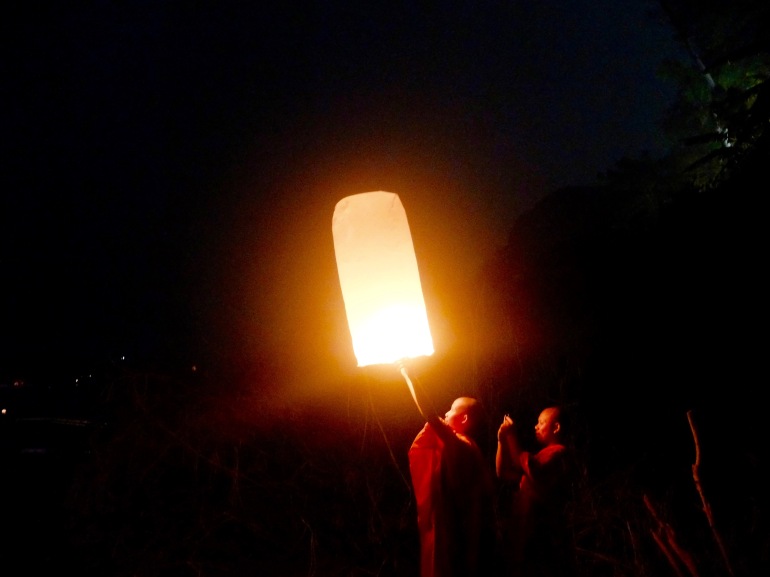 A few days earlier, we had flown into Luang Prabang just after 6 pm to find the entire airport shut down. Luckily, the guesthouse we were staying at – Manichan Guesthouse – had a pickup service. We saw the sign with “Ashley Tangerine” and heaved a sigh of relief.

After dropping our stuff in our room for the next four nights, we decided to venture out and get our bearings. We wanted to check out the local handicraft night market and find something to eat! It worked out well that we had no money on us, otherwise I’m sure we would have purchased everything in sight. Instead, we made our way to our much beloved Joma Bakery – figuring we’d be more adventurous foodies on another night.

The following day we decided to further our wanderings through the Buddhist temples and monasteries that make up the UNESCO World Heritage Site in Luang Prabang. Our first stop was at the National Palace Museum (just a note, make sure to arrive early, they close 30 minutes before they say they do both in the morning and afternoon! It took multiple trips before we finally had time to see everything).

The temple outside the museum is pretty cool, and there’s a collection of vintage cars as well, but there’s not a lot worth seeing inside the museum itself. That is, until you get to the final room…it’s filled with gifts that have been given to Laos over the years and contains four moon rocks, given by President Nixon (it was shocking to see his name in a positive light, after seeing so much anti-American propaganda in Vietnam!). 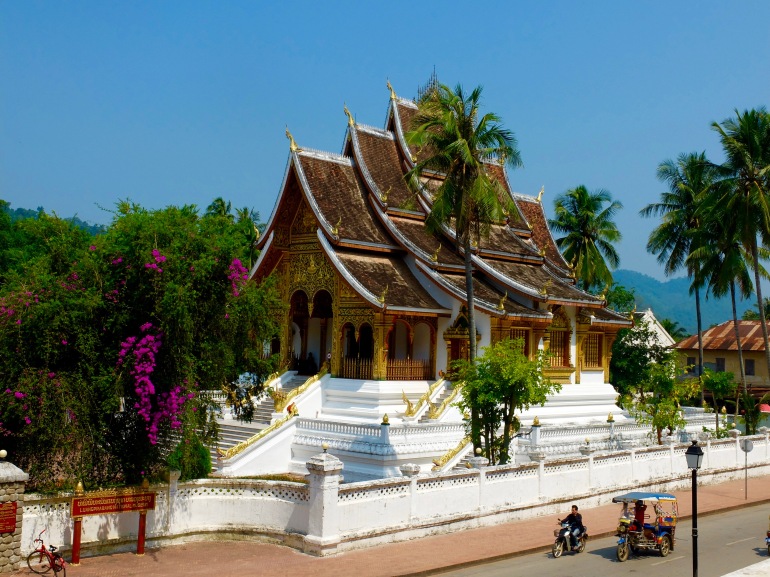 Later on that day, we weaved in and out of temples – Wat May Souvannapoumaram, Wat Sensoukaram, and Wat Pahouak were some of our favourites – before coming to the most famous of them all: Wat Xieng Thong. Each village in the region has a temple in Luang Prabang, explaining why there are so many of them!

Wat Xieng Thong and its surrounding chapel halls are decorated with mirror-shard mosaics depicting local village life and the exploits of Siaw Sawat, a hero from a famous Lao novel. Normally, I much prefer the outsides of temples to the insides – I feel there’s more to look at – but Wat Xieng Thong’s insides were just as stunning as its outsides.

That night, we made true on our promise to be more adventurous food-wise and went to the local night stalls. We had noticed the night before that despite how much food was out in the open, there didn’t seem to be any flies.

The stalls were an all-you-can-fit-on-your-plate affair (for 15 kip, which is just under $2). And awesomely enough, all of the choices were vegetarian friendly (the meat stalls sat next door). So we piled our plates high and began to dig in…

…to cold food. Which makes sense, it had been sitting out since it was made. We had gotten used to cold food in Ethiopia (they still haven’t quite figured out the concept of a heated buffet), but after two months of eating only the freshest of fresh food, we found it was no longer to our liking. We ate what we had – or at least most of it – relishing the few items that tasted great cold (seasoned green beans, Asian noodles, cucumbers).

Afterward, armed with a bit of money, we tackled the Handicraft Night Market again – glad we hadn’t purchased anything the night before, if only to familiarize ourselves with the prices. The Night Market, as it stands, is the only reasonably priced thing we’ve come across in Laos so far (more in my next blog on the prices here!).

Day three found us heading out of town to the Kuang Si Waterfalls. Rated the #1 thing to do IN Luang Prabang (we found that hilarious), we decided to check them out.

After an hour’s ride in an oversized tuk-tuk, we walked over to the Tat Kuang Si Bear Rescue Center, situated near the base of the falls. The center rescues bears captured by poachers and have saved 34 in Laos so far.

Then it was time to hike up to the waterfall…oh wait, did I say hike? I meant walk…up the incredibly nice paved path large enough for two cars. Chandler was a lot more excited about this than our “walk on an uphill path” to Kbal Spean.

The falls were incredible. Larger than any other we’d seen on this trip. We visited the Blue Nile Falls while we were living in Ethiopia, and while those are impressively wide, Kuang Si’s are impressively high. And, thankfully, actually blue. You can swim in the water here, though it’s definitely a bit frigid!

Below are two photos I have of the waterfall, the second’s included to give you a bit more perspective on the sheer size of this waterfall. Despite its size, the current is relatively mild, which allowed me to wade out under the falls themselves. 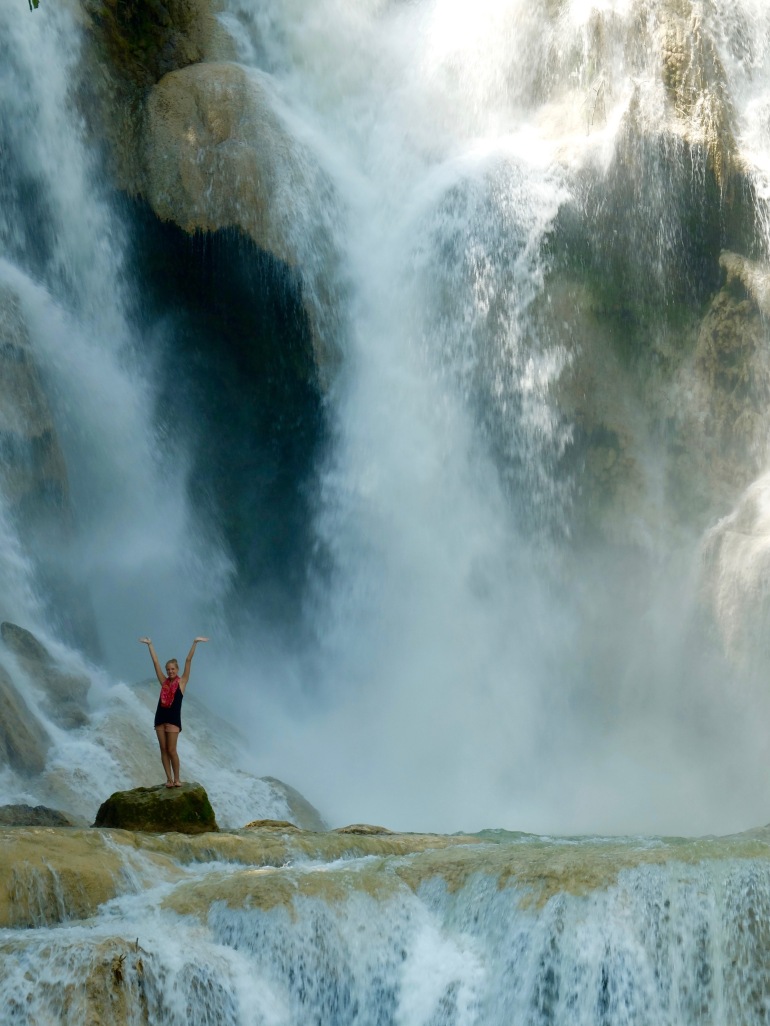 That same day, in Luang Prabang itself, a festival was taking place: Bun Awk Phansa. Bun Awk Phansa is the last day of the Buddhist lent. In the morning, monks leave their monasteries and walk throughout the town, accepting offerings. That night, the celebrations were supposed to begin, but the lunar eclipse pushed the festivities to the following day.

That next night, it seemed as if everyone in the town was out. Each temple had made its own bamboo boat and there was a town-wide parade culminating at the judges’ stand. After the winners were declared, the boats were sailed down the Mekong.

Miniature versions (like the one below) were made by local restaurants and shops – our guesthouse even got together to make one! I don’t know the full story, but we were told to either place clippings of our fingernails or strands of our hair inside the boat. As it sailed away, it was supposed to take any negative energy or mistakes we had made away, giving us a fresh start.

I can’t say if it worked or not, but it was fun participating in the ceremony all the same. We walked down to the pier with a number of others from our guesthouse and collectively pushed our boat into the water.

All around us, others were doing the same. Either setting to drift flower-filled bamboo boats or making wishes into their paper lanterns before letting them float away. I’ll remember the magic in that night sky for a long time to come.