Moving on from Paris, we made our way to Leysin via train. Now I have to say, trains are my favorite way to travel…to most places. We did take a pretty terrifying sleeper train from Hanoi to Dong Hoi back in 2014 on our way to Phong Nha-Ke Bang National Park in Vietnam. I’m pretty sure I shared a bunk with a rat – a top bunk that I somehow got placed in even after paying the upgrade for the bottom bunk. So that train sucked.

But European trains are incredible. Especially when traveling first class, something we were forced to do when purchasing our Eurail passes. At the time, we thought the train passes were a little pricey – $812 for both of us to take trains on 5 separate days anywhere in France, Switzerland, and Italy (next year it will be $900, because I’ll be 28 and no longer considered a European “youth”).

After that initial fee, anytime you travel between countries you have to pay a reservation fee of $20-$50, it was starting to feel ridiculous. Until we traveled round-trip from Leysin to Zurich and learned that those tickets alone would have cost almost $800. That was when we realized that Eurail is actually quite reasonable! But more on that in my next post.

First things first, we settled into life in Leysin. Chandler had grad school classes Monday-Friday, usually from 8:30-5:00, with homework half the nights during the week. Needless to say, we didn’t see a lot of each other.

While he was gone, I was in my Swiss paradise. An Airbnb that was nice & cozy with a great view of the mountains. 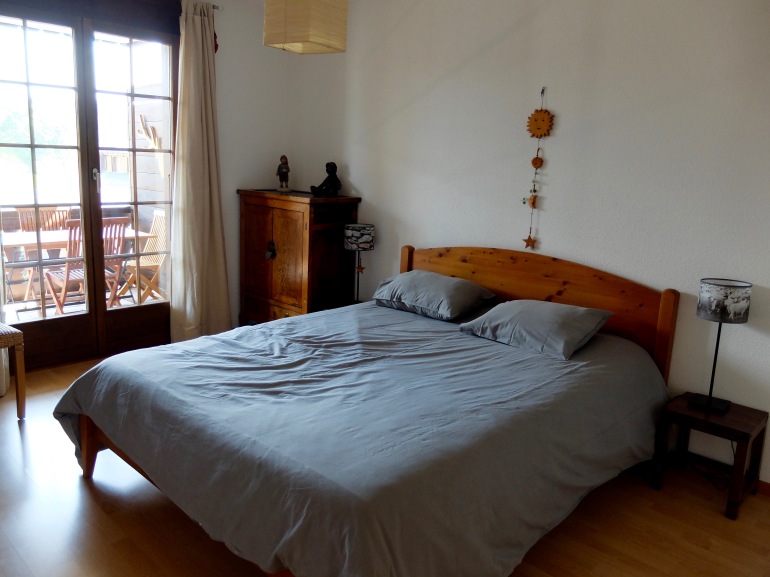 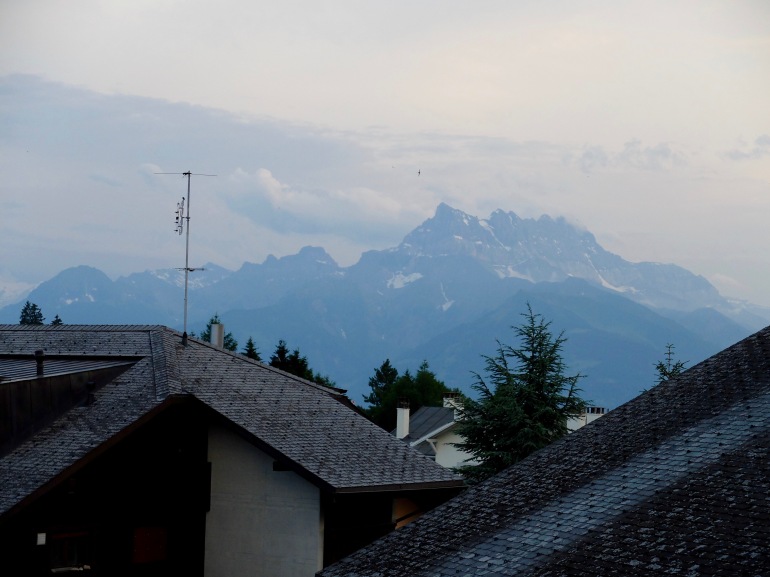 But as lovely as the apartment was, I didn’t want to spend all of my time there. Our first full weekend in Leysin (after Chandler’s first week of classes), a colleague from our school in Accra was in town on her way to the Montreaux Jazz Festival. Another colleague from Accra was also in the program with Chandler and so the four of us set off on a morning hike.

Lazy things that we are, we took the cable car to the mountain peak and planned a hike that wound around and back down. I should also probably admit that the route was chosen very specifically because it passed a fromagerie that we had every intention of stopping in when we came across it.

The views from the top were stunning, but a bit limited due to the fog/clouds that surrounded us during our hike. That said, it made the temperature quite enjoyable for the four hours we spent strolling along. 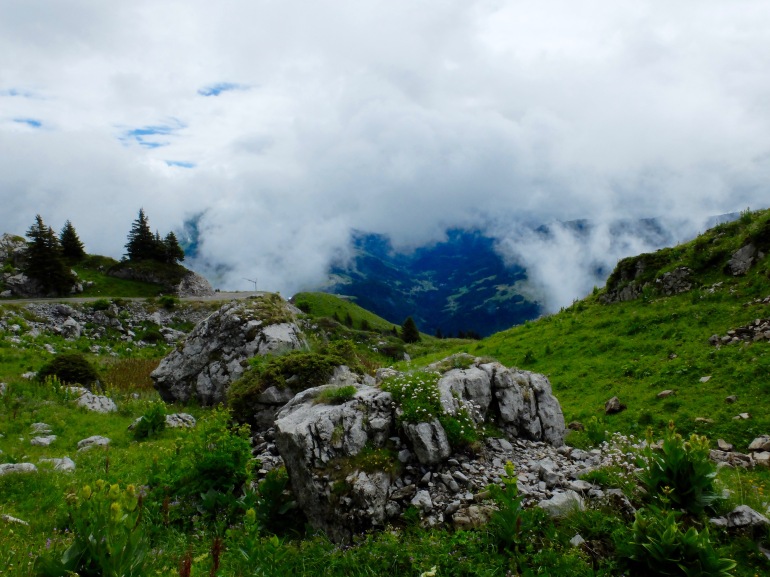 We finally made it to the fromagerie about two hours in and were pretty hungry. We looked at their chalkboard menu and one thing stood out: Fondue. But no matter what we said, they wouldn’t serve it to us.

The man we “spoke” to was Bosnian and had been a cheese-maker there for a number of years before coming to Leysin nearly two decades prior. He spoke very little English, but one of our friends was French, so we were able to communicate. That said, we didn’t really need her interpretations – his gestures told us the whole story…

When you eat fondue at high altitudes in the cold you can’t drink much of anything: water, wine, etc. Since we were mid-hike, he was afraid we would ignore his warning and shortly after ingesting the fondue we’d drink a lot of water. That would cause our intestines to burst and we’d have to go to the hospital where we would blame his restaurant and he’d get in trouble. Goodness, that’s a lot of drama for a little fondue.

So, despite fondue being on the menu, it was not on the menu for us. I quickly ran my eyes down the rest of the menu and we very happily suggested the mac & cheese instead. This was a great choice, he said. There would be no burst intestines. Plus, his mac & cheese was a specialty, he added ham.

Then followed another very long discussion. Two of us are vegetarians, so we politely asked if one of the portions could be made ham-free (planning on splitting two portions between the four of us – we were on a hike after all). He was appalled. Yes, he knew the word vegetarian, but didn’t that only apply to beef? Vegetarians can eat ham, right?

Wow. Now as a vegetarian, I’ve been asked numerous times if I eat fish (the answer is still no, people who eat fish are known as pescaterians), but no one has ever wondered if ham was all right. We rather futilely tried to tell him that no, we would not eat ham and in the end he agreed to make one mac & cheese with ham and one with vegetables. Whew. We were finally getting food!

We made our way into the dinning hall to find three large dogs lying about. Shit. Chandler’s allergic. So we go back to the guy…is there any way we can eat outside? No, food is only allowed in the dining hall. But my husband is allergic to dogs. No, there are no allergies at this altitude. Great.

It’s no wonder that when the food came, he had only half-heartedly taken what we said into consideration. He did indeed make one serving with vegetables. But, so convinced was he in the tastiness of his ham mac & cheese that he brought out two servings worth of it – knowing that us weak vegetarians would break down and want to try some.

It didn’t happen and our two friends each had a serving of mac & cheese to eat as well as a bill that doubled. This lovely man then discovered that the majority of us were American and went on a five-minute rant. I didn’t catch all of it, but the word racism is universal and you know what dude, I can’t really argue with you on that.

After his rant, he seemed in a much better mood and offered to take us on a tour of the fromagerie. They make their own cheeses there every morning from the milk of about 100 cows that they milk in what looks like two train cars.

They then boil the milk in these giant pots that you could definitely host a hot tub party in. There were some more details that were lost in translation, but he also showed us the salt water where the cheeses are placed and then the actual storage room where they age. 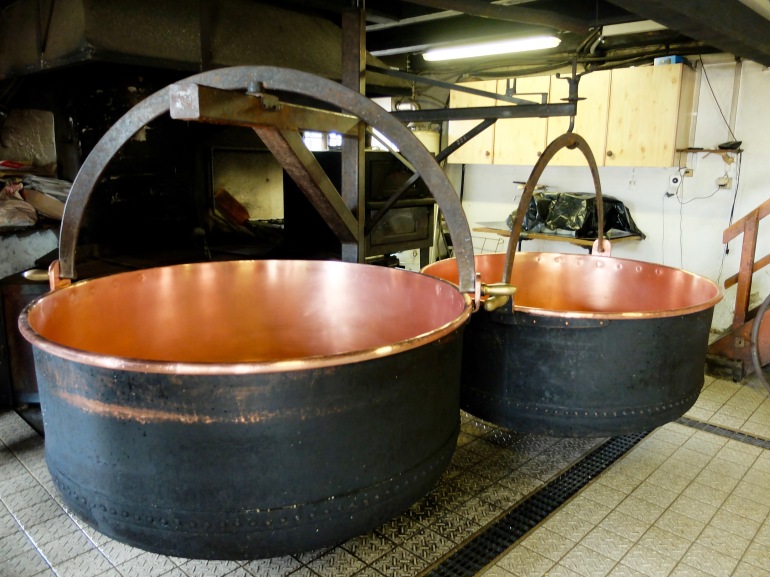 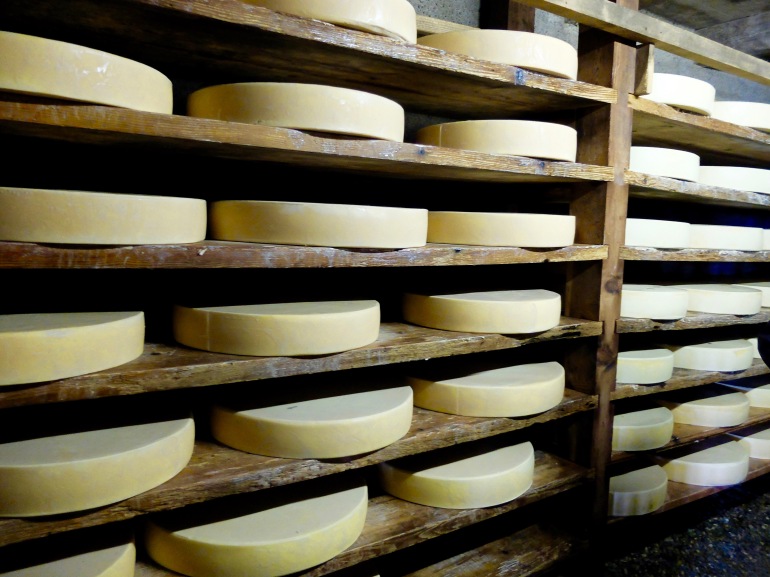 Our friend was convinced the Swiss age cheese in caves and so he was pretty disappointed to see the room photographed above. That said, later on during our time in Switzerland, we learned that while he may have been wrong about the cheese, he was correct about the caves. Wineries in Switzerland sample and sell their wines in “caves.” But we wouldn’t learn that for two more weeks.

After a rather long goodbye, filled with promises of setting up our single friend with one of the local peasant girls, we made our way down the rest of the mountain – uneventfully. But that was fine, our time at the fromagerie had left us with plenty of memories.