340 days ago, the American people did something I would have never thought possible: They elected Donald Trump as president. And I can “not my president” all I want, but honestly, it has been easier to ignore what’s happening back home while living abroad.

Every time a new embarrassing/depressing headline was announced…

And these were just some of the New York Times’ articles during the first 100 days of Trump’s presidency. They don’t even include Trump’s war against my health rights as a woman, NRA (Nonsensical Rifle Addiction), our pull-out from UNESCO, etc. Honestly…it’s hard not to keep adding to this list.

But before, I could hide behind my overseas-ness. I could declare – I don’t know those kinds of Americans. But going home, I knew I’d have to face it.

And I can honestly say I wasn’t prepared for some of the conversations.

“Hillary should be locked up” – how many times does this woman have to be cleared of those charges? How haven’t we found something new to talk about? Trust me, plenty has happened since.

“Fox News is the most trustworthy news source.” Well, in 2012, a Fairleigh Dickinson University survey reported that “Fox News viewers were less informed about current events than people who didn’t follow the news at all.” So, in 2016, Forbes published a survey conducted by William Poundstone that released these findings instead: 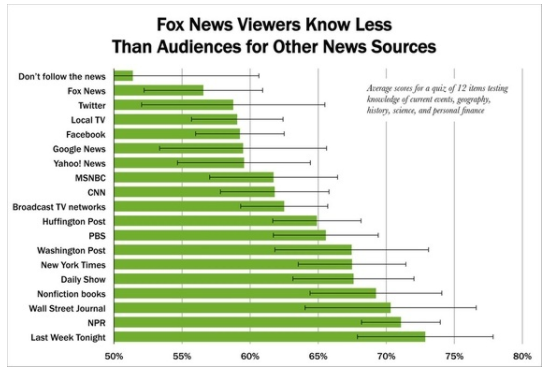 The ignorance that so many Americans carry around with them on a daily basis astounds me. And that’s a tough sentence to write because I also know so many Americans who are actively fighting the hatred and lies spewed by the man currently leading our country.

They stay informed.
They spread facts, not “fake news.”
They get involved with their local and state representatives.
They donate to organizations directly under attack from the Trump administration.
They join rallies and marches.
They live with civility.

But for those who have stayed, and for those who are having these conversations, I have so much respect for you. Because we’re better than this, so we should act like it.