Something that surprised me about Egypt: How quickly I become obsessed with their doors.

Egypt feels like the land time forgot…everything dusty and broken down. Yet, their doors and the objects surrounding them were so often covered in weathered, but vibrant colors. I couldn’t stop snapping photos.

Chandler eventually asked me what I was taking so many photos of, and he rolled his eyes when I told him about my obsession with doors. He would say I have an obsession with photographing anything – and later he used my nearly 1,000 photos from our three weeks in Egypt and Jordan as proof.

I decided to use this vacation to really unplug – which means that while I brought my camera, I didn’t bring my laptop. And so my photos had to stay safe & sound, patiently waiting on my SD card until we got back to Accra.

Now that the new year has begun and we’re home sweet home, I find myself agreeing with my husband. I have an absurd number of photos to edit and organize.

Which is why my first post about our bucket list holiday is starting with photos of doors – they were easy to catalog!

And so, while this may not be the post you were expecting…nothing about the Pyramids or our week-long cruise on the Nile. No photos of the constantly changing and mesmerising colors of Petra or Wadi Rum. Those will come later. Today, you have doors.

My first set of doors were snapped in the small town of Esna, at the start of our cruise. And while I say small town, the bustling port had more to offer than I initially expected. Just 33 miles south of Luxor it is also home to the Temple of Khnum – but those photos will come later! 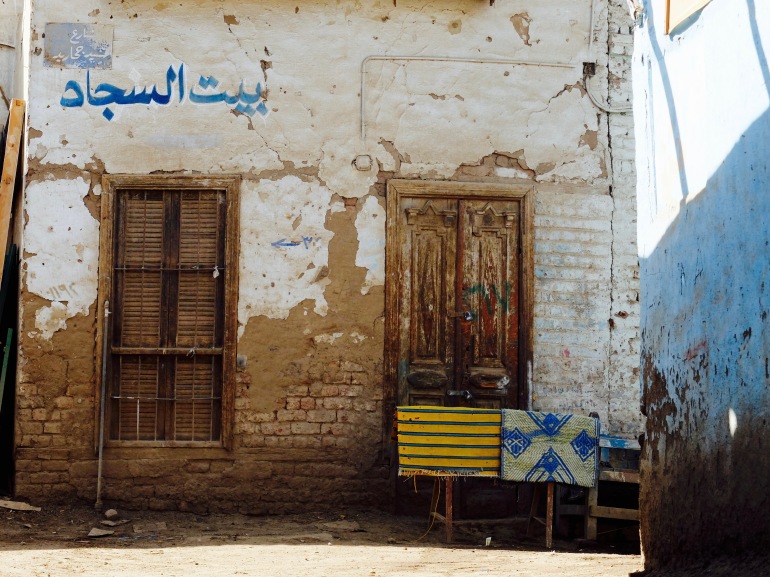 I loved how crowded these spaces were and how nearly every door was blocked by everyday life.

My next set of doors where from a fishing village near El Kab. We docked to take a look at the Temple of Nekhbet and took a stroll through a local village catching their wares in the river and weaving baskets out of reused plastics and ribbon.

Fast forward to Cairo for my final shot and first metal door. I can’t say why these doors fascinated me so much…and why I didn’t fall head over heels for the doors in Jordan – I guess I’m just particular that way. But these shots surprised me by being some of my favorite from the trip. Perhaps because they were so unexpected.

And here I am now hoping that I can get my next, obviously more relevant, posts about our holiday up sooner rather than later. Because heading to Egypt and Jordan definitely involved some major bucket list checking and I’d love to share those experiences with you.