This weekend, six of us decided to try our hands at batiking. If you don’t know what that is, batik is the process of decorating cloth using wax and dye.

The word batik originates from the Javanese tik and means to dot. And the style was brought to Ghana by Dutch merchants.

To make our batik, we chose areas of the fabric to stamp with wax and then the cloth was dyed. The parts covered in wax resist the dye and stay the original color. You can repeat this process over and over, layering the dyes. The woman who taught us, makes some of the most beautiful designs. Our first tries were much simpler!

We arrived at Esther’s compound around 9:30 in the morning (an in-depth interview with Esther can be found here). We were greeted with cold water and warm hugs, as Esther showed us around. In the past year, she has built a complex for bathrooms, as well as a dedicated lean-to to protect visitors from the sun.

While Esther has been creating her own batiks for the last 20 years, she would happily spend her days running these workshops and teaching others the skill.

First, you start with the stamps:

From traditional prints to animals to the artist formerly known as Prince, Esther has a lot to choose from. I’m not kidding when I say our first hour was spent looking through the stamps.

We also needed to decided if we wanted to start with a white canvas or if we wanted to dye our fabric first. You’re more likely to get what you have in mind if you stamp on white, but dying first often gives a more textured look to the fabric.

I couldn’t make up my mind, so I decided to do multiple prints. For 120 cedis (approx $30 USD) you get the tutorial, as well as your first two yards of fabric. Each yard of fabric thereafter is another 16 cedis (approx $4 USD). I decided to start with two designs, both requiring a pre-dye: one raspberry, the other charcoal.

While I puttered around, choosing my colors and my stamps, Chandler had already gotten started (that’s right, I convinced Chandler to come with us!). Unsurprisingly, he chose a simple stamp, with a simple pattern, on white cloth.

Over the next hour, my fabric sat in dye, before being rung out and dried in the yard. The process is quite straightforward. Mix the powdered dyes to get the right color and stir it in the water. Esther was quite clear – despite your best efforts, coloring rarely turns out exactly as planned. Something we were going to learn soon enough! 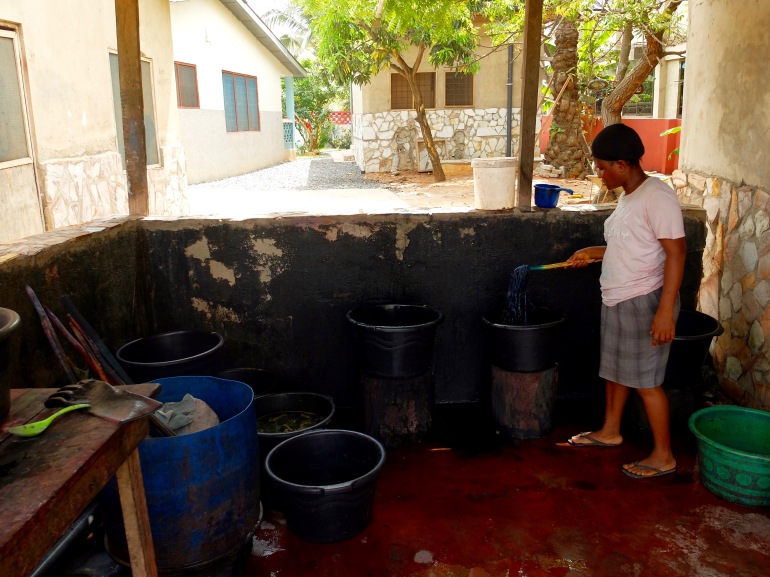 After my fabric had dyed, it was my turn to begin stamping. I started with the gray fabric and then moved along to my favorite design and color: raspberry. I have a habit of buying fabrics in the blue category so this was a chance for me to push outside my comfort zone. And I had specifically chosen a pattern that I could sloppily press, knowing that some of my favorite designs from Esther used an overlapping effect.

After that, we let the wax dry and then it was time for round two of dying. A deep teal for the charcoal and a plum for the raspberry. In the meantime, I was lured by another stamp, one of little truffula trees. This time around I stuck with the white background and decided to dye the rest of the fabric yellow.

Little by little the cloths were laid out to dry in the sun.

See my truffula trees on the right? And Jill made some adorable “wrapping paper” cloth with rhinos. Troy created a pretty epic print in red.

Our more complex cloths still needed to be scraped of wax, which happened by tossing them in buckets of boiling water. All of this took place in Esther’s backyard.

By 2:00 pm, we all had our very own batik to take home. But we had learned some valuable lessons…

First: If you want the perfect design, simply buy it from Esther – she’s better than you are

Second: The colors will not match what you envision if you try to mix them

Third: Have fun…make something unstressful like fabric for pillowcases or wrapping paper 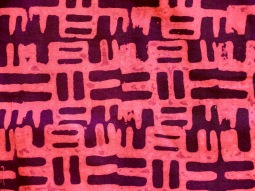 My truffula tress in the top left-hand corner are going to be turned into tote bags, the gray and teal is going to be made into a bedskirt, Chandler’s fabric on the bottom is going to be used as a throw on one of our couches.

But my raspberry/plum fabric ended up bubble pink. Which leaves me wondering…what do I do with it??? Any suggestions?