When we were planning our trip to Berlin, we had, of course, heard about Museum Island. A UNESCO World Heritage site, it is home to five museums showcasing some seriously impressive artwork.

But it took going to Berlin to discover many of the other wonderful museums – over 200 in total – and we spent an amazing week in their hallowed halls.

We arrived in Berlin on a Monday morning and were fortunate enough to have some incredible friends who let us crash with them. It’s always nice to have someone in the city with recommendations on what to do – and not to do!

Our first museum wasn’t on Museum Island, but since our host, Alise, was interested in revisiting the Gemäldegalerie, we started our tour with a collection of paintings ranging from the 13th to 18th centuries. Initially high on my list, after about an hour weaving in and out of an unsurprisingly lot of religious paintings, the only thing that really caught my attention was this half of Jean Fouquet’s Melun Diptych:

I loved the vivid colors and the story behind painting Mary’s breast and Jesus’ genitals – making her more maternal, him less formal and more relatable. Having gone to museums in nearly every country I’ve visited, Germany was the first place I really got into audio guides – it certainly helped that they were free! But without it, I probably would’ve spent even less time in this museum.

Our next museum was visited because we still had 30 minutes to kill before heading over to the free Tuesday concert at the Berliner Philharmonie. We had purchased the Museum Pass Berlin, which for 29 euros, gives you access to over 30 museums in the city. Without that pass, and Alise’s recommendation, we never would have heard of this museum: Kunstgewerbemuseum or Museum of Decorative Arts.

Chandler really went to look at their selection of chairs, but we had a fun time looking through their entire furniture collection. There’s also a fashion gallery with costumes from the 18th to 20th centuries that we wanted to go back for, but never had the time. Another really random, but memorable part of the museum is their current exhibition on the food revolution. It doesn’t sound like it should all belong in one museum, but somehow it all worked. 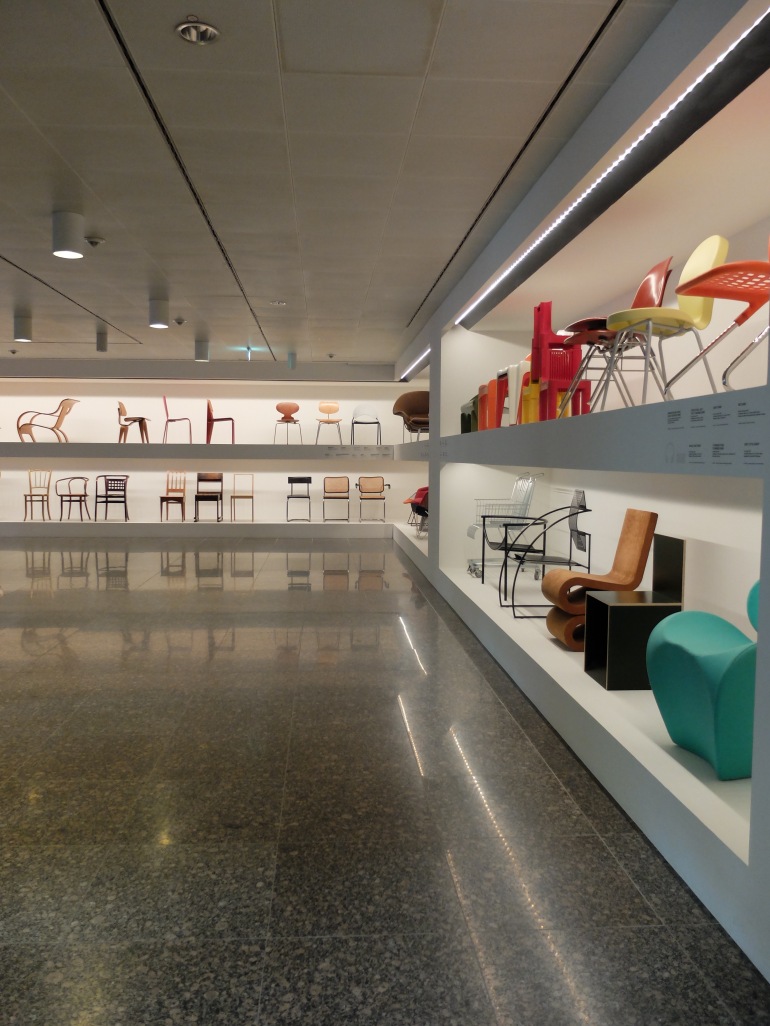 The next day – because you can only do so many museums in one day – we made our way to Museum Island and the famed Pergamon Museum. Worried about crowds, we made a quick stop at the Brandenburg Gate, before arriving at the museum shortly after it opened.

We needn’t have worried. For whatever reason – construction, difficulty finding the entrance, etc. we had no problems getting in. In fact, we were concerned the museum was closed as we breezed past the “Two hour wait,” “One hour wait,” and “You’re almost there,” line signs. The only people at the door were two security guards who ushered us in.

The first thing you see when you walk up into the museum itself is the Ishtar Gate:

Way larger than I could have expected, that seemed to be the theme of the museum: larger than life. Because not only was there the Ishtar Gate, but the Pergamon Museum is also home to the Roman Market Gate of Miletus, as well as the Mshatta Façade – each towering over the visitor. I’ve never seen pieces of this size put together in a museum before.

The well-known Pergamon Alter is unavailable until 2023, with construction in the museum (they’re adding a fourth wing) to be completed in 2025. We were more than happy with what we saw. We also loved the collection of Islamic Art – that being our highlight the last time we went to the Louvre and for our stopover in Qatar. 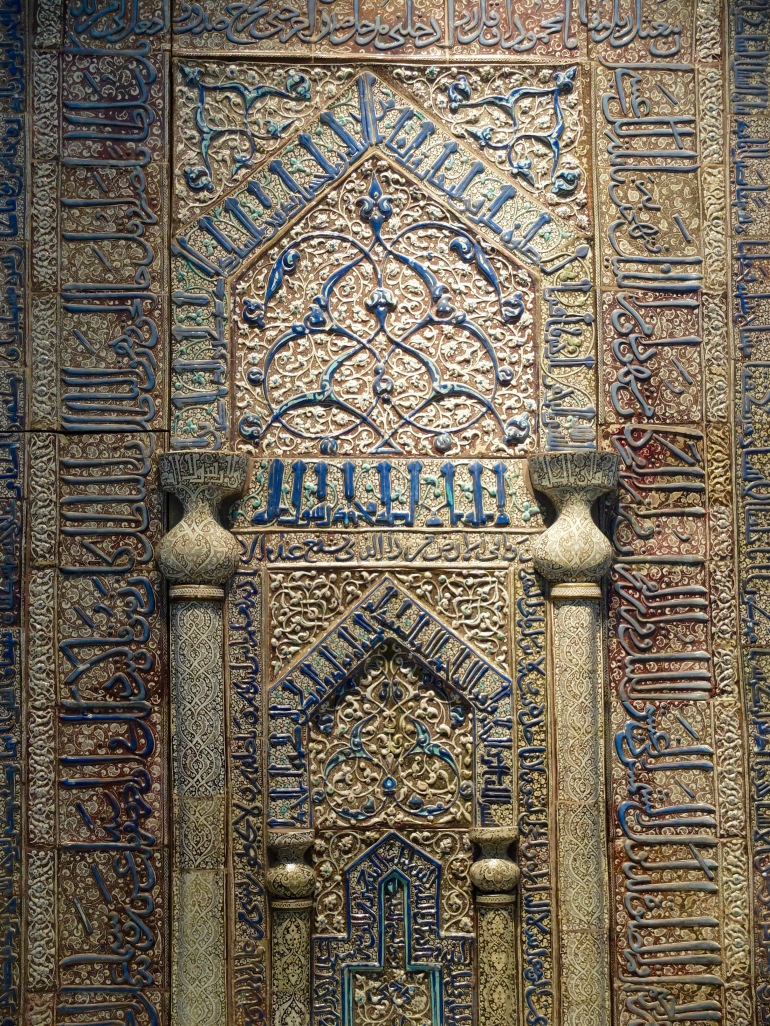 At this point, we were getting ready for lunch, but we didn’t want to leave Museum Island without a look at the Bust of Nefertiti. So we quickly stopped inside the Neues Museum. Other than the bust, we didn’t have a strong desire to look at more Egyptian artifacts, having spent our winter holiday in Egypt.

Photographs aren’t allowed inside the room where the bust is kept, but it was pretty hilarious watching people queue up behind a line in the neighboring room for a shot through the glass encasing.

After an amazing lunch – more on going vegan in Berlin in another post – and some vintage shopping, we were back at Museum Island for one last museum of the day: the Alte National Galerie.

Opened in 1876, the museum is home to some of my favorite Museum Island statues (much better than Altes Museum in my opinion), as well as to paintings both wonderful and absurd.

Once again, the audio guides proved to be an integral part of the experience. Take, for instance, Johann Gottfried Schadow’s Princesses Luise and Friederike:

I like statues more than the average person – just ask Chandler how long I stood in front of Antonio Canova’s Amor and Psyche at the Louvre. But I would have missed so much of this story without the audio guide.

Two sisters, Luise and Friederike, were married to two princes. Their father-in-law, Frederick William II of Prussia commissioned Johann Gottfried Schadow to create a bust of the sisters. It turned out to be so popular, that he later was asked to sculpt their full figures. This was also a sensation. However, when Frederick William II died and his son, Frederick William III – husband of Luise – became king, he ordered the statue removed and it remained hidden in the palace until the early 1900s.

The reasoning: His younger brother, husband of Friederike, had also recently died. And instead of spend her life in mourning, she went out and had lovers, eventually getting pregnant by one and being married off. Frederik William III didn’t want his wife’s “pure” reputation to be sullied by her connection with her sister, so he removed the statue.

The Alte National Galerie also contains more Adolph Menzel paintings than I ever expected to see in my lifetime (everything from an oddly painted horse head, to bleak landscapes, to some lovely party scenes).

We also got to experience the absurdities of Arnold Böcklin’s paintings, especially appreciating Sirens:

And then some really beautiful works by him, including The Isle of the Dead:

Thoroughly museumed out by this point, we were only mildly disappointed to learn that our three-day pass didn’t allow us access into the museum’s current exhibition: Wanderlust. The perfect exhibition for us, perhaps, but we had a goal to see the rest of Museum Island the following day.

However, instead of heading straight back to the island the next day, we took an unusual route to the Museum für Naturkunde. For whatever reason (I didn’t see enough of them in my childhood?) I’m obsessed with dinosaurs. For my birthday in 2015, while we were living in Texas, we went to the Dinosaur Valley State Park in Glen Rose to visit dino footprints. And on a previous excursion with Alise in Oklahoma, she took me to the Sam Noble Museum of Natural History.

So, of course, home of the tallest mounted dinosaur skeleton in the world, the Museum für Naturkunde wasn’t to be missed.

To be honest, we didn’t wander in past the main room. But there, we happily spent half an hour marvelling at these giants creatures and learning all about the Allosaurus (and their brutal killing methods), the Dysalotosaurus (with their missing first toes), the Elaphrosaurus (and their speed), the Diplodocus (known for their “tripod” stance), the Kentrosauras (and their great spines), the Dicraeosaurus (who could barely lift its neck – because different sauropods ate plants at different heights), and the Brachiosaurus (as tall as a four-story building and as heavy as 10 large elephants). Did I learn more here than all the other museums combined? Possibly : )

But we had two more museums left for the day. So after an unusual morning – more on my favorite Berlin activities in another post – we were back for our final taste of Museum Island.

We started at Bode-Museum, a building I was excited about mostly for its architecture. Well known for its Byzantine collection, as well as its coins, I wasn’t sure it would hold much for me. It ended up quite possibly being my favorite museum in Berlin. Not necessarily for the long-term, though it does have some lovely sculptures like Antonio Canova’s Dancer and the Apse Mosaic from Ravenna, it was its current exhibition, Beyond Compare, that caught my attention and imagination:

The catalyst for this exhibition? Putto with Tambourine and Statue of the Goddess Irhevbu or of Princess Edeleyo

These figures are now key highlights of Berlin’s Museums. However, in the early 1900s, the two objects were interpreted differently in the museum scene. Putto was celebrated as a key work by the Renaissance master Donatello and was displayed prominently in the new Kaiser-Friedrich-Musuem (now Bode-Museum). Goddess Irhevbu/Princess Edeleyo, coming from the Kingdom of Benin (modern day Nigeria) was seen as “primitive.”

Some memorable comparisons were between this Mangaaka and the Virgin Mary: 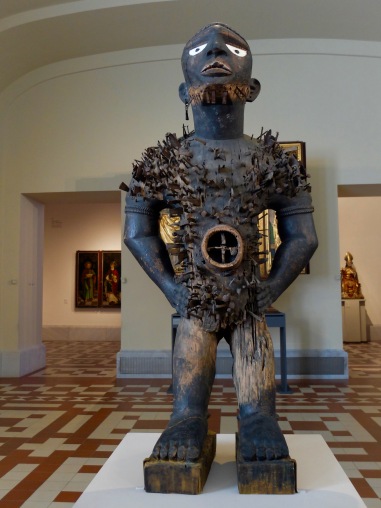 Similarly, the Head of an Oba and the Head of John the Baptist on a Charger was an important comparison:

African art, often considered “primitive” and “violent,” here depicts and commemorates a deceased king. The image represents ideas such as death, memorials, idealization, and ancestors. It is not a violent image. John the Baptist, on the other hand, depicts a man who was violently beheaded.

It was exciting to see a piece of artwork from Ghana (albeit only one – and one I have easy access to in Accra), but there were also works from the Democratic Republic of Congo, Cameroon, Nigeria, Burkina Faso, Mali, Côte d’Ivoire, Liberia, Guinea, and more.

That exhibit would have been an amazing ending point for our Berlin museum tour. However, we had one final stop: Altes Museum. Opened in 1830, it was the first museum on Museum Island. Known for its classical antiquities, we breezed through the museum, only really pausing on the second floor to look through a room on Etruscan sexual identity that seemed coupled with a recent showcase featuring 100 German women wearing only transparent tights in the New National Gallery of Berlin.

Despite my love of statues, if you’re in a time crunch, this is the museum on Museum Island I would say you could skip – as well as the Neues Museum.

And with that, our three-day pass was finished. And, of course, there were plenty of other interesting museums we missed. Not only did we not get a chance to head back to Kunstgewerbemuseum, we didn’t make it to other museums on our list like the DDR Museum or the Berliner Unterwelten or the Topography of Terror. Chandler was incredibly disappointed that the Bauhaus Archives – Museum of Design is closed for renovations and their temporary collection won’t open until June 30th, 2018.

But I have to say, we were absolutely thrilled with what we got to see and experience in Berlin’s museums. And we’re definitely looking forward to coming back and exploring the rest.