If you caught my other Swiss blogs, you’ve had to read about my love of cheese. So it’s no surprise that Chandler and I decided to spend a day in Gruyères, home to…you guessed it: gruyère cheese.

Sweet, yet salty, I prefer my gruyère aged 18 months.

The trains from Leysin to Gruyères can take as little as two hours, but our second train was delayed and our trip ended up taking three instead. It wasn’t all bad news, however, as we got to take the panoramic scenic train instead (at no extra charge!). 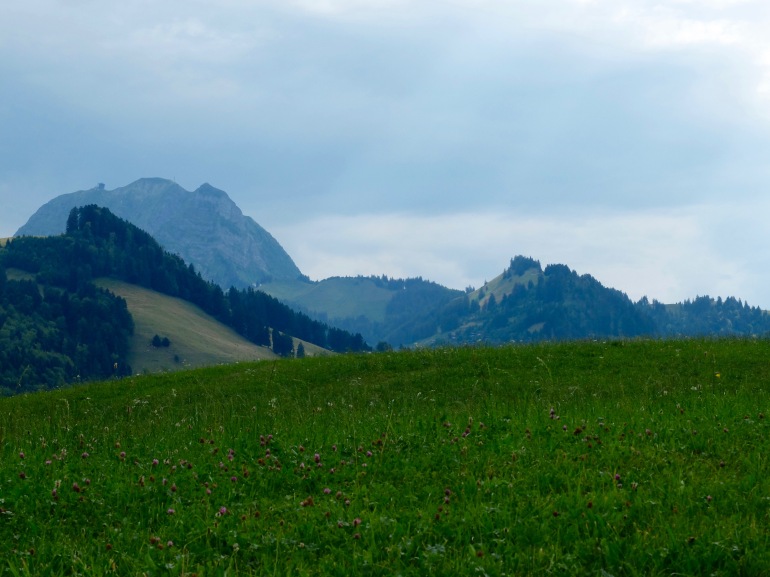 We arrived at the Gruyères train station at 1:00 pm and walked across the street (convenient, right?) to La Maison du Gruyère – aka the cheese factory.

This was supposed to be a place where dreams come true. I was big time bucket-listing in Switzerland (having gone to The Little Mermaid castle the previous weekend) and this cheese factory was no exception.

We paid our entrance fee and picked up our cheese samples (aged six, eight, and ten months), as well as our audio guides. They were in the process of cutting the curd, so we were told to skip ahead to stations 10-13. My life changed at station 12.

Over my audio guide speaker, I was informed that rennet is added approximately 35-40 minutes before the milk sets and then three large wire cutters slowly slice the curd up into small particles (what we were seeing happen).

Now, I had heard of rennet before – vaguely – and knew it was something I didn’t want to know more about, but I thought it referred to the rinds of certain kinds of cheese. I was wrong.

The Gruyère cheese factory was more than happy to educate me on the origin of rennet: a natural enzyme extracted from the stomach of calves. Butchered calves. As in, no longer living calves.

The enzymes (rennet) are then mixed into the milk and cause it to coagulate.

Mind and heart blown – simultaneously. Every time I eat cheese, I’m eating calf stomach. And I call myself a vegetarian. Needless to say, my stomach started rumbling from my cheese samples (the mind is a powerful thing!) and I quickly began to realize what I would be giving up.

Now, luckily, not all cheese is made with animal rennet. Mozarella is usually safe to eat. So is ricotta, paneer, halloumi, and cottage cheese. Many companies have switched from using animal rennet to using rennet made from plants, fungi, or microbes. In fact, due to a meat scare in the 1970s, 90% of cheese from the UK is vegetarian. And tons of American brands have vegetarian-friendly cheese as well.

The problem is, many European cheeses are protected aka they’ve remained old school. Which means, according to European Union law, parmesan must contain animal rennet in order to be called Parmigiano-Reggiano. And many other cheeses follow suit: manchego, emmenthaler, pecorino romano, gorgonzola, mimolette, and camembert, to name a few.

If we lived in the United States, this knowledge would be heartbreaking, but manageable. Many grocery stores, like Trader Joe’s, Whole Foods, and even Aldi are specific when labeling their cheeses and are careful to differentiate between the different types of rennet.

I can only hope we have some luck with that when we return to Accra in August.

For those in the states, I’ve had some luck finding vegetarian cheese brands on this site.

So, it is with a heavy heart that I say goodbye to gruyère cheese and many others.

Luckily, however, that wasn’t the end of our day. We still had four hours left to explore the town of Gruyères itself.

A traditional medieval town, with a population of just over 2,000, it made a valiant attempt to distract me from my previous disappointments. After a lunch overlooking the hillside – with frequent interruptions by local alpine horn players – we were ready to see what else the town had to offer.

Located at the top of the town, the castle has beautiful views of the surrounding countryside. Pair that with the well-manicured gardens and it was difficult to tear our eyes away and make our way inside the castle. 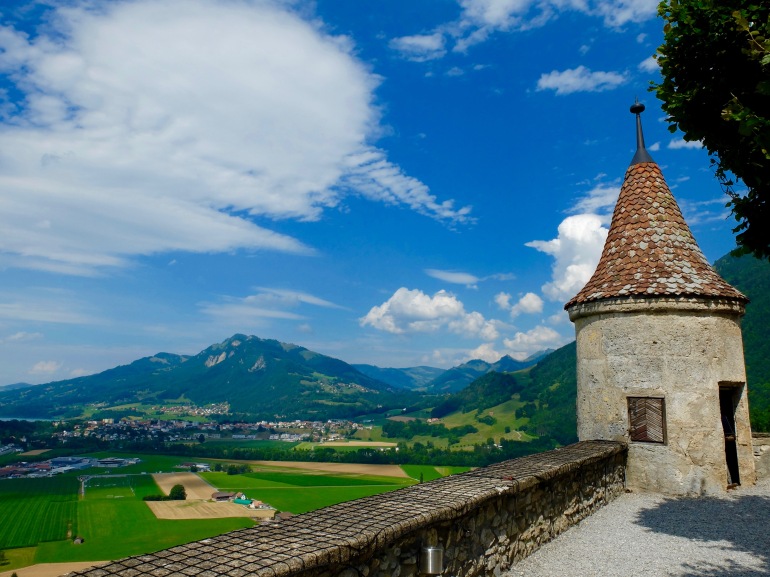 Not expecting much – because we hadn’t been all that impressed with the interior of the Château de Chillon – we were surprised to find ourselves equally captivated by the beauty we found indoors.

The chandeliers were stunning and the stained glass did not disappoint.

And there was a surprising lot of modern artwork to be found in staircases, side rooms, and attics.

We had fun “creating” some artwork of our own: 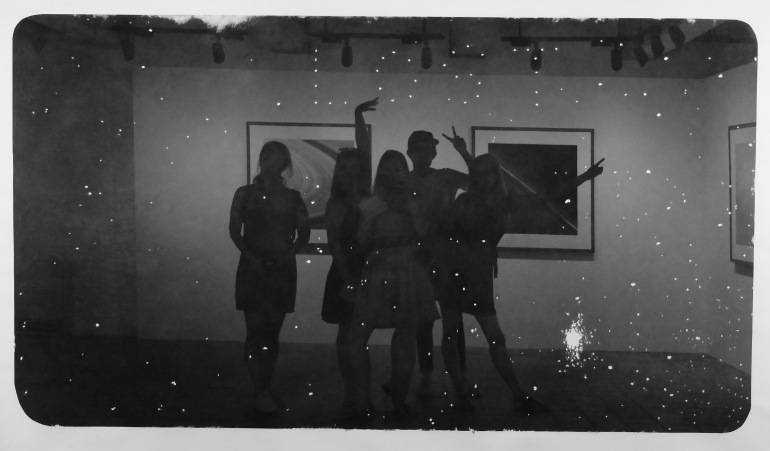 I could have easily spent the rest of the day relaxing at the castle, but there was another required stop for day: The HR Giger Museum.

I knew very little about this man – other than he won an Oscar for his work with Aliens (a film I’ve never seen). But Chandler was so excited to see the film memorabilia that we couldn’t help but get psyched up for the weirdness we were sure we were about to encounter.

And weird it was. As well as disturbing. Graphic. Oddly sexual. Oh, and there were Aliens’ artifacts too.

Photographs weren’t allowed inside, and I’m thinking that’s for the best. 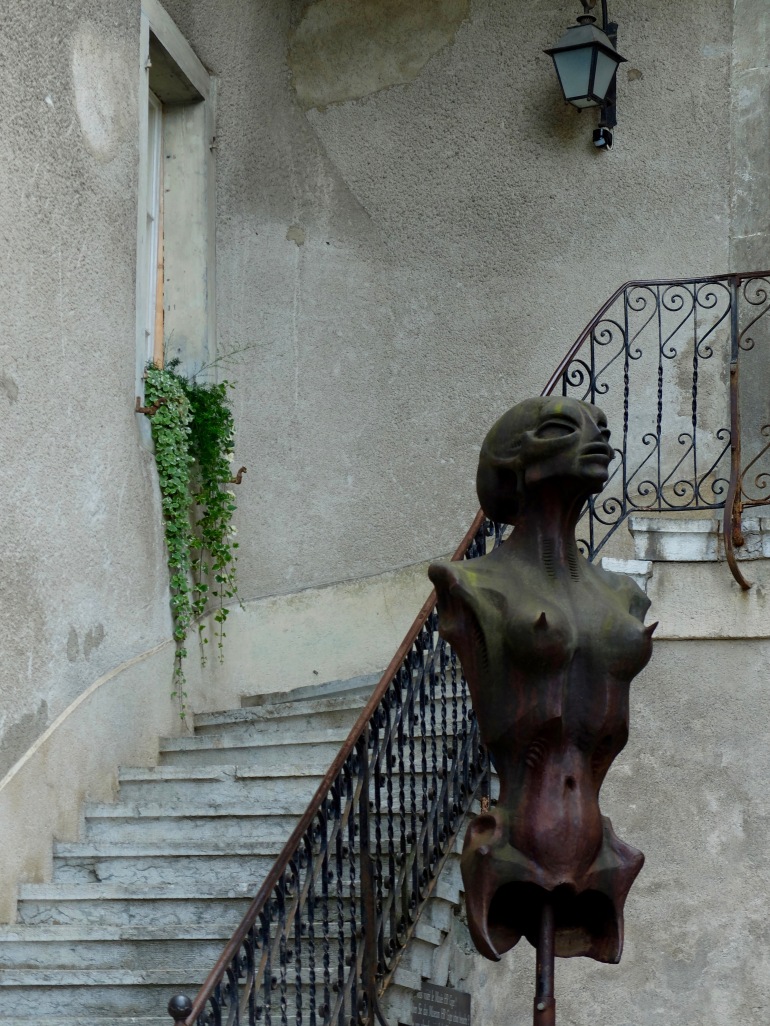 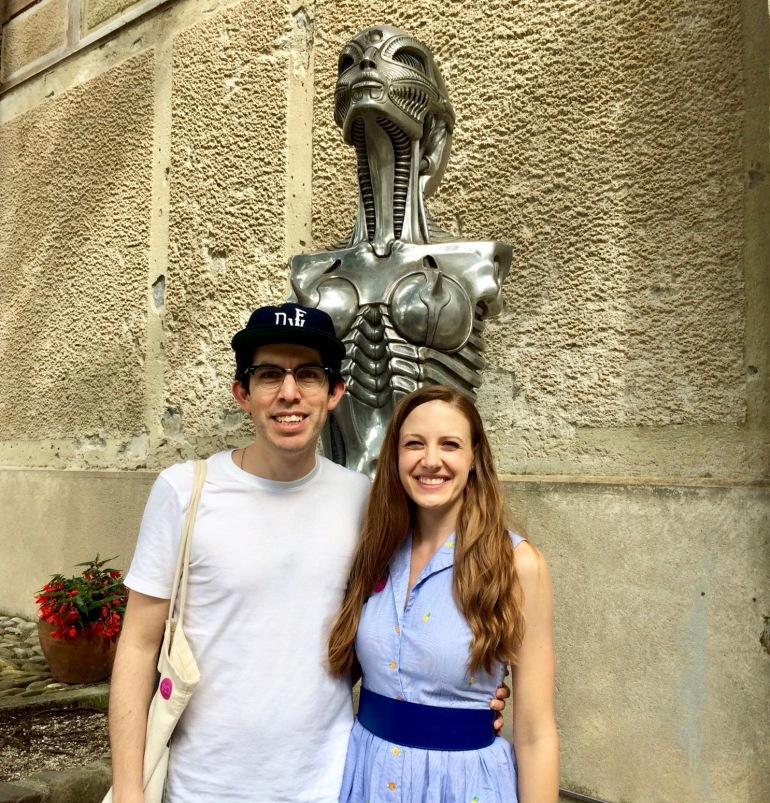 Perhaps you can tell from the smile on my face that I was glad to be out of the museum and back in fresh air/civilization!

We didn’t have much time left at that point, so we just wandered around the town square. We found a shop selling some of the local wine we had for lunch (it was quite good), as well as a chocolate shop – we had planned on going to the Maison Cailler Chocolaterie in nearby Broc, but couldn’t make it with the train delay.

I can only wonder at how simple my life would have remained had we gone to the chocolaterie instead of the fromagerie – though I guess it’s better to know the truth about cheese. 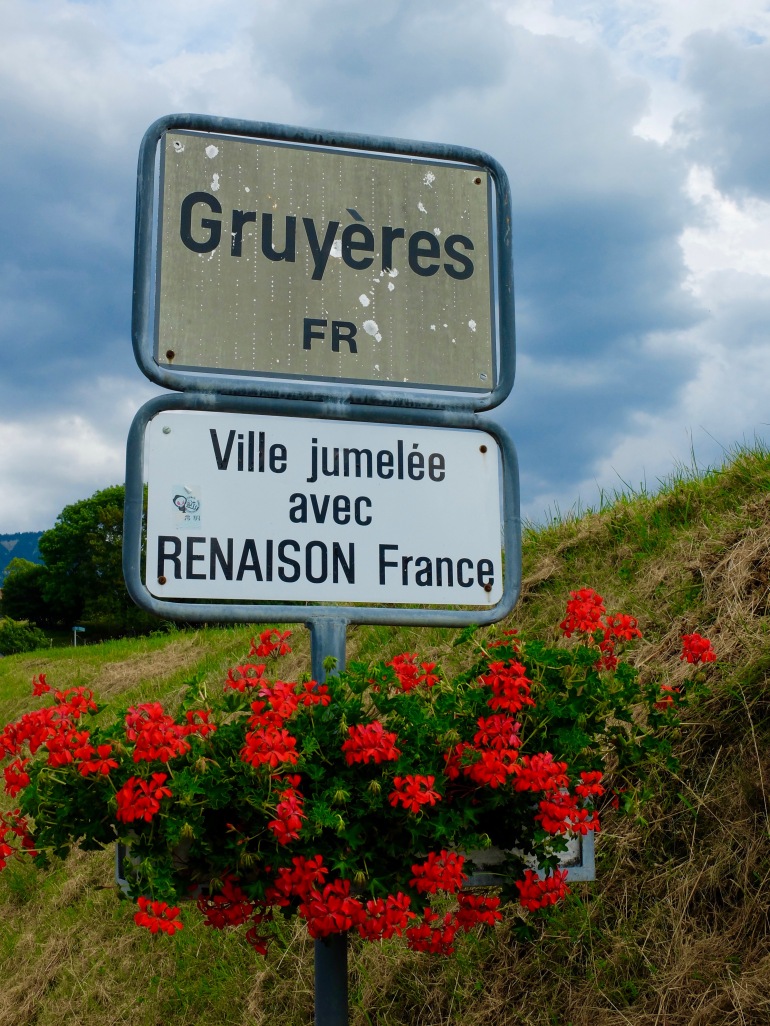 I think it’s safe to say I’ll never forget my day in Gruyères. And for better or worse, I’m now a more aware vegetarian. But my blissful ignorance was nice while it lasted.