After a lot of questions, concerns, and research aka blood, sweat, and tears online, we decided to stay in Manarola during our Cinque Terre trip. Literally meaning “five lands,” Cinque Terre is comprised of five towns: Monterosso, Vernazza, Corniglia, Manarola, and Riomaggiore.

The town we stayed in is only important because of its hiking accessibility – or, inaccessibility. In 2011 Cinque Terre experienced a terrible flood and the area still hasn’t fully recovered. The towns have been rebuilt and many of the trails as well, but the two main trails leading out of Manarola – to Corniglia in the north and Riomaggiore in the south – have yet to be finished.

This was a concern of ours, but also a draw. We hoped it might mean that Manarola would be quieter, a little less touristed and we were right: It ended up being our favorite town.

And just because the main trails are closed, it doesn’t mean you can’t hike out of Manarola at all. There are still inland trails you can take up to Volastra and then to Corniglia. The key word in that sentence being “up.”

The two main trails leading out of Manarola used to be the easiest hikes in Cinque Terre, everything that’s left is a little more intense. I say that at the beginning of this post because I did a lot of hiking in Switzerland this summer – and most of it in my sandals – but these trails aren’t as well maintained. And while I successfully completed all our hikes in Cinque Terre, I definitely should have traded my sandals in for my converse.

Our hike began with a train ride from Manarola to Corniglia. We wanted to do the two traditional trails that are currently open – the one between Corniglia and Vernazza, follwed by Vernazza to Monterosso.

Trains are easy in Cinque Terre in the sense that you can combine your National Park pass with a train pass. For 29 euros a person, we had access to all the paths, trains, buses, and bathrooms between Levanto and La Spezia – for two days.

The first thing you do upon arriving in Corniglia is make your way to the stairs that lead you up into the town. It wasn’t until our second day that we realized that just outside the train station is a bus that takes you to and from the town as well! But since this was the beginning of our hike, I’m glad I didn’t know about the bus.

The first thing we noticed on the staircase was how lovely everything looked below – plus we could see Manarola in the distance! 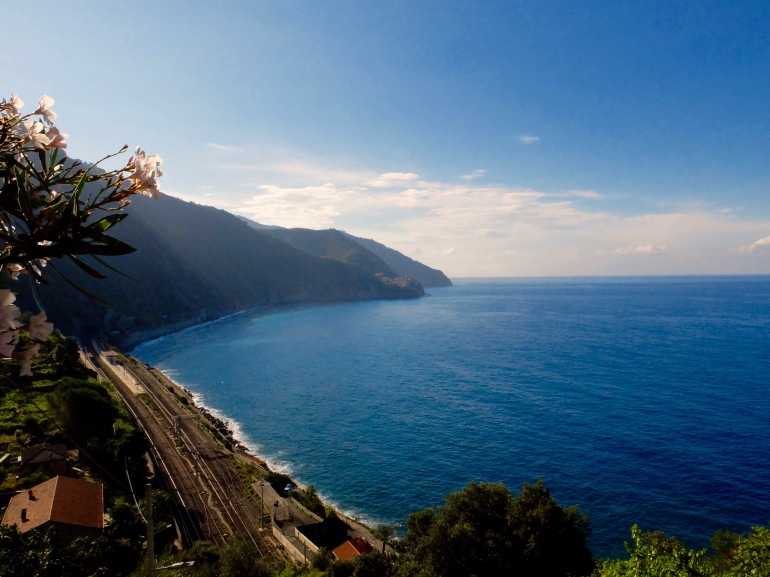 We arrived at the top – already sweaty, thanks to the heat! And quickly found the markers that we would be following for the rest of the day:

Instead of signs, the paths in Cinque Terre are marked with intermittent paint along the way. After a few false starts, we were out of Corniglia and on our way to Vernazza.

Parts of the trails reminded us of Switzerland. Especially walking through the terraced vineyards (Cinque Terre has their own DOC wine) and the provincial lifestyle we encountered. 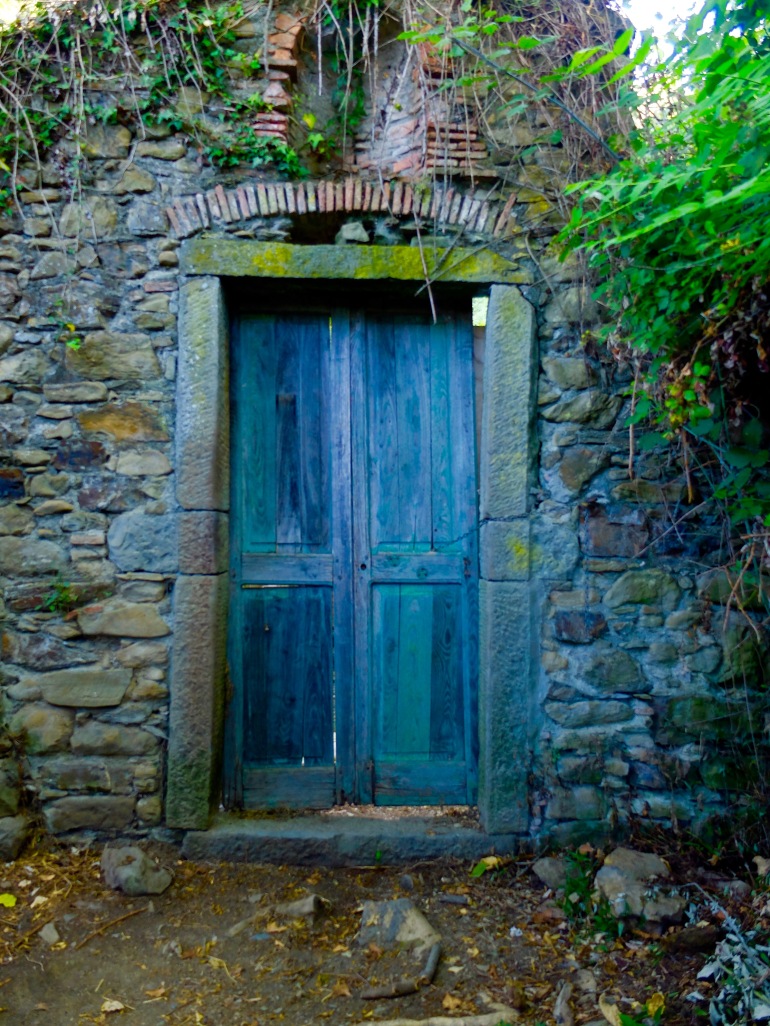 Obviously, Cinque Terre is famous for the towns’ colored façades. But we had no idea how luxuriously rich and varied the landscape would be. It felt like a verifiable jungle at times. 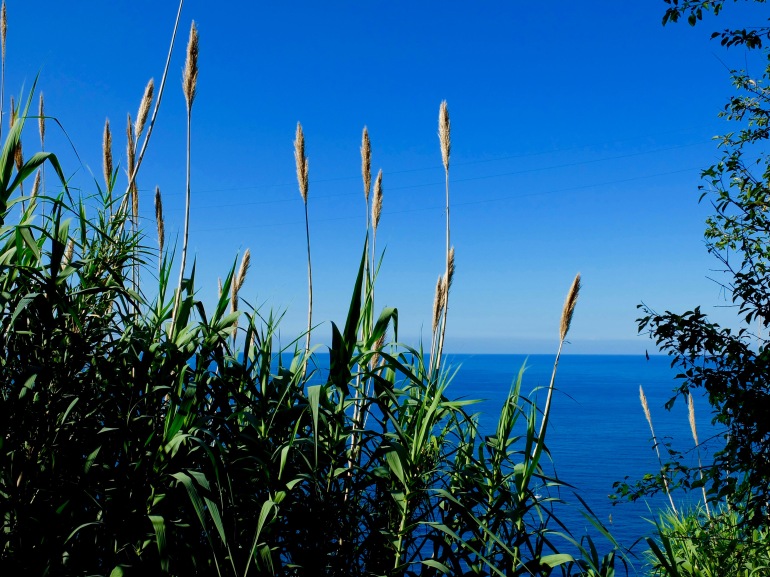 The day was hot (it was Italy in July, after all), but most of the path is shaded. We started our trek shortly before 9:00 am and encountered very few people along the way.

We arrived in Vernazza around 10:30 am and proceeded to eat the world’s earliest lunch. People were still sipping their morning cappuccinos while we ordered our juice and sammies at Lunch Box – perfect sustenance knowing we still had half our hike to go!

In no time at all were were on our way again, this time to Monterosso.

As we hiked, the views continued to stun us. The water was absolutely breathtaking and we encountered new (at least to me!) plant species. 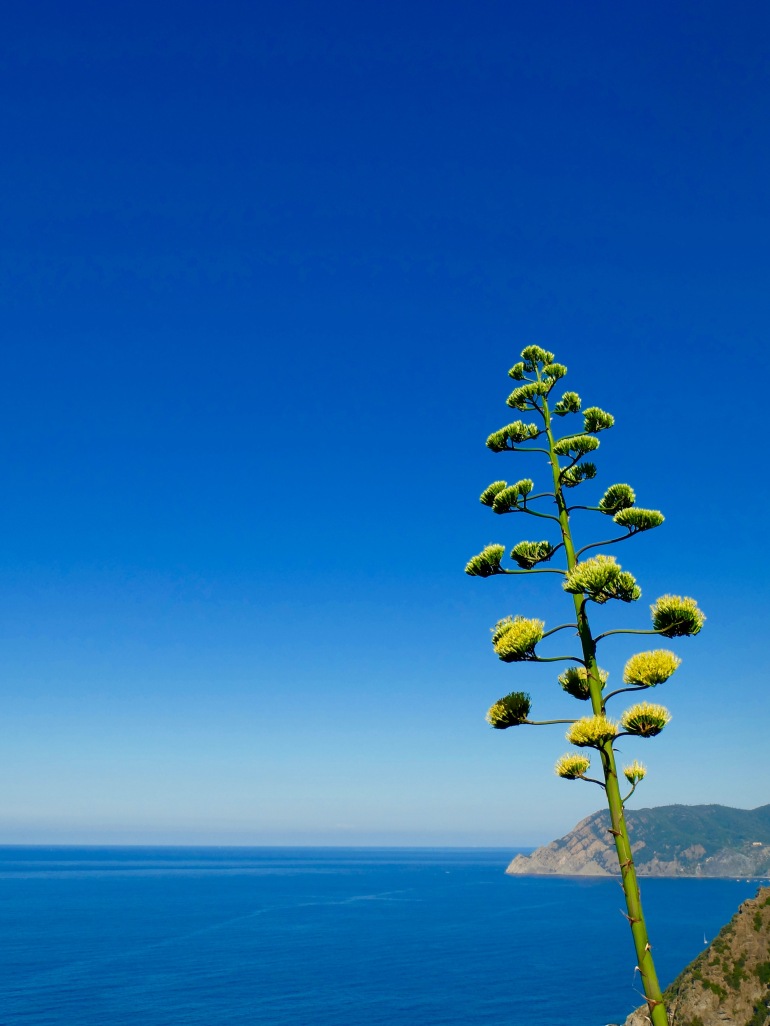 It was at this point Chandler became a little grumbly. We started encountering a lot more people (who had started their hike in Monterosso) and, of course, it was getting a lot hotter! Luckily, we had friends who had hiked this path with a second and fourth grader just a month prior, so I had plenty of material to make fun of him with : )

The hike to Monterosso took about the same amount of time as our previous hike, and so before long, our final destination came into view.

Getting to this beach, however, would prove harrowing. The number of unpaved steps at the end of this trail is ridiculous. Our only consolation was looking at the hundreds of faces of people trying to go UP when we were on our way DOWN. It looked like a pretty miserable way to start a hike!

That day, at least, it seemed like just about everyone was starting their hike in Monterosso, and if I can give you any advice, if you make your way to Cinque Terre, you should end your hike in Monterosso. For two very obvious reasons: You get to go down the stairs, and, you get to end at the beach.

Corniglia doesn’t really have access to water – except by boat – but in Monterosso, you can find a beach for anyone. From adventurous cliffs to calm coves. From private to public, there’s a beach for you. 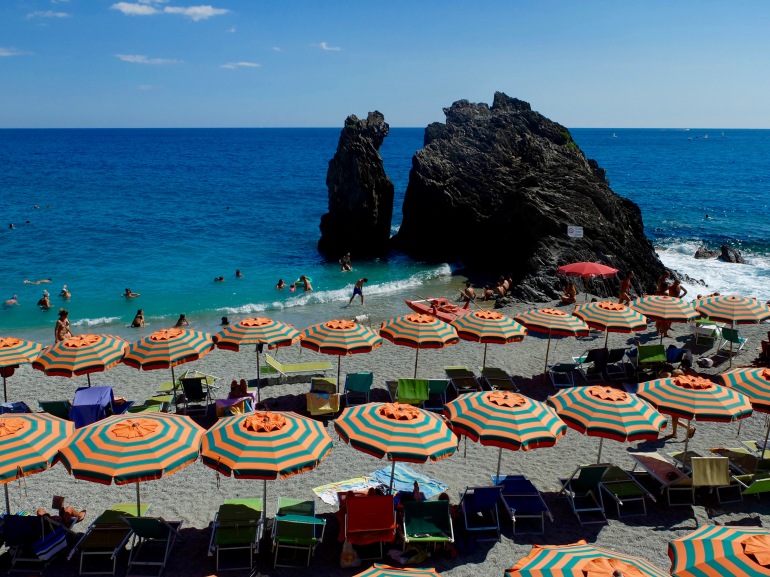 And after a quick jump in, I was already cooling off from our morning to early-afternoon hike.

We ended our day with a train ride to Riomaggiore for some pizza and then we were ready to head home to Manarola. We had seen all five towns in just one day. Our hiking was finished and we were ready for some more casual explorations the following day.