After 2 1/2 years of living in Accra and never traveling anywhere with weather cooler than 50 degrees Fahrenheit (Ireland: April), I was craving a winter wonderland. And my husband was kind enough to humor me. It doesn’t hurt that some of the cheapest flights out of Ghana head to Europe anyway.

So, we picked a route already much traveled: Budapest, Vienna, and Prague.

Now, we know many people visit these same cities in the opposite order, but we chose our route for two reasons: It was $800 cheaper to fly into Budapest & out of Prague and a NYE in Prague sounded like a lot of fun!

We were the most informed about Budapest for one simple reason: Our friends used to live there. They gave us the 411 on the best restaurants, where to buy international craft beer, and which activities we were not to miss.

Some of our outings were incredible: Fisherman’s Bastion definitely stands out. While others, notably the Gellert Baths, were not. But it’s always nice to have people who can warn you that it’s enough just to see the Parliament Building from the outside, you don’t need to go all in for the tour. And who tell you there’s not much to see at the Central Market Hall, even if you ignore them and go anyway (should have listened). But, I’m jumping ahead of myself.

We arrived in Budapest around mid-day to find the unexpected: Snow. Luckily, the 100E bus went from the airport practically to our Airbnb’s front door. Even so, we were still freezing!

See, the problem with only experiencing tropical heat and Europe in the summer, meant we were severely underdressed. I had a jacket, but only flats on my feet. While Chandler had sneakers, but only a flannel and sweatshirt.

We lugged our suitcase up the stairs (there are always stairs in Europe) and then set out for the three things we needed most: Lunch, groceries, and warm clothes. In that order. After a quick and delicious meal – homemade pasta at 2 Spaghi – and a grocery run for our upcoming breakfasts, we were ready for the shopping to begin.

By hour two we were nearing desperation, when a miracle occurred and we both found what we needed. Spoiler alert: While I’m still in love with my boots and they made the trip back to Accra with me, after three weeks, Chandler’s jacket had lost two of its three buttons and all of his pockets had holes in them. The jacket stayed behind in Prague!

My boots, however, ended up being one of the best purchases of our trip. Because, as you can see from the previous photo, not only was there snow on the ground when we arrived in Budapest, but it snowed a few more times during the week we were there! And while that meant we had to find more indoor activities to keep us occupied, some of the most beautiful sights still involved being outside.

We love to wander around cities. We never rent a car, we rarely go on tours (Egypt), we sometimes get metro passes. Mostly we just walk, walk, walk. You can imagine the difficulty in that when temperatures are 60 degrees colder than you’re used to!

But despite Chandler’s (constant) and my (occasional) complaints, Budapest was still a lovely city to walk around in. And the snow, while cold, made the city more beautiful in the dead of winter.

Fun fact: Christmas markets aren’t really our thing. The treats are too sweet, the wind too bracing, and the crafts just aren’t our style. But the one thing I love about Christmas markets are their locations! They often seem to be in the most beautiful locations. So while I rarely purchased anything in the markets themselves, they were always worthwhile photo shoots.

These photographs were taken at the Christmas market outside of St. Stephen’s Basilica. And while the market was smaller than the one found downtown at Vörösmarty Square, the surrounding architecture was much preferred.

More beautiful sights were to be seen on our walk to the Hungarian Parliament Building aka our walk to Bortársaság Wine Shop. 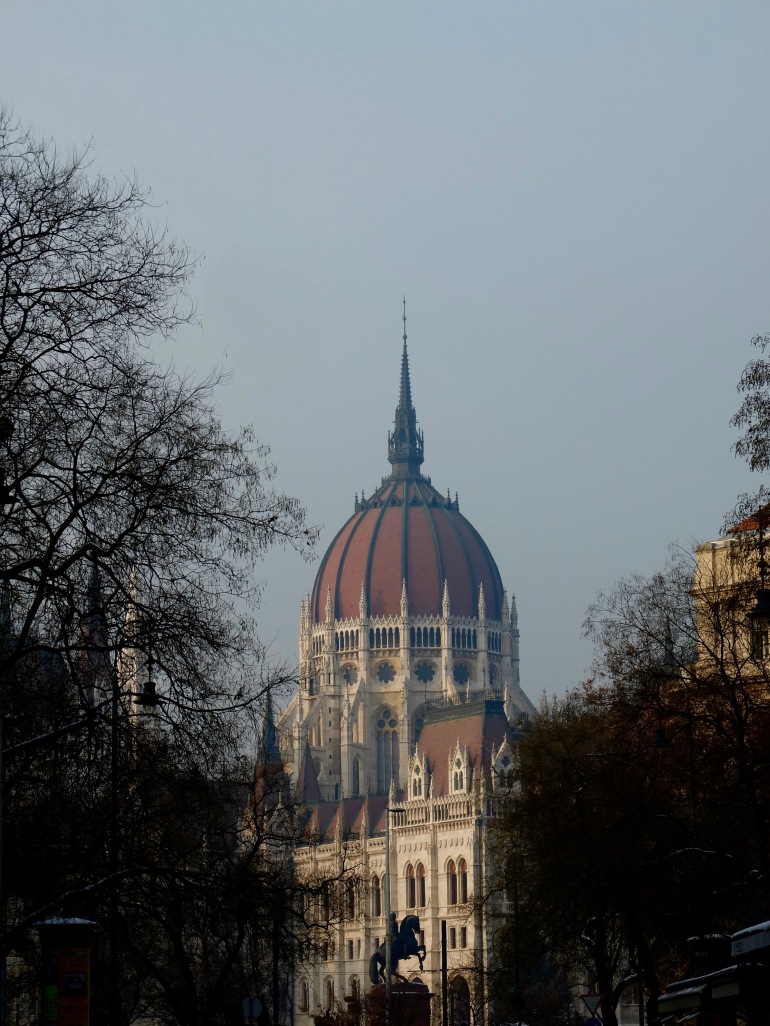 This incredible view of Parliament could be seen standing on the bridge with Imre Nagy’s statue. Unfortunately, just days after our visit, the Hungarian government removed this statue, causing protests from locals. 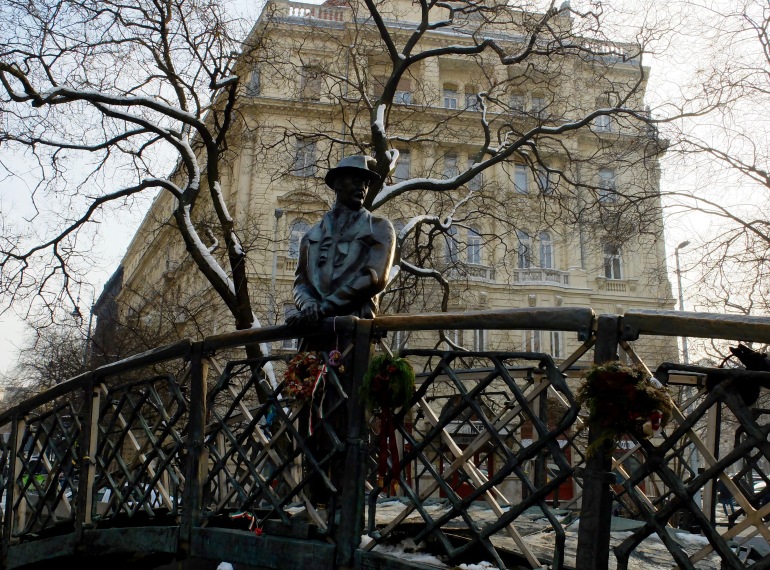 The largest building in Hungary and the tallest building in Budapest, Parliament is definitely worth a visit. That said, we have no regrets about keeping our visit to the outside of the building, despite Tripadvisor listing it as the top attraction in Budapest.

And our just-above-freezing temps meant that we didn’t have to share the views with many others. 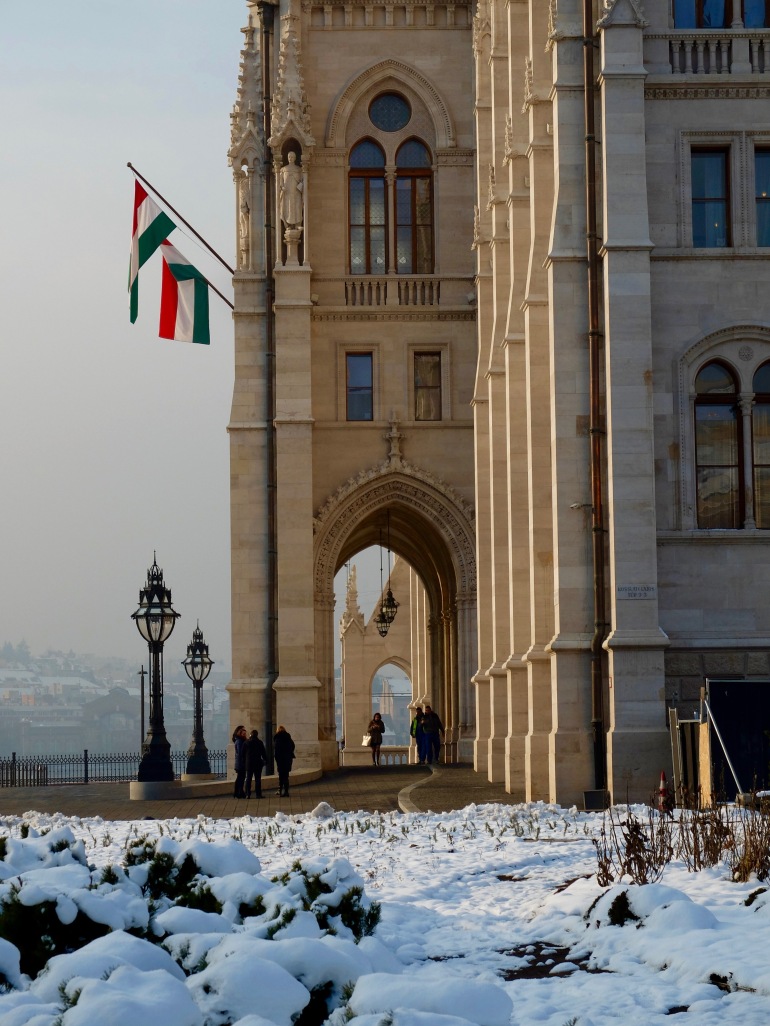 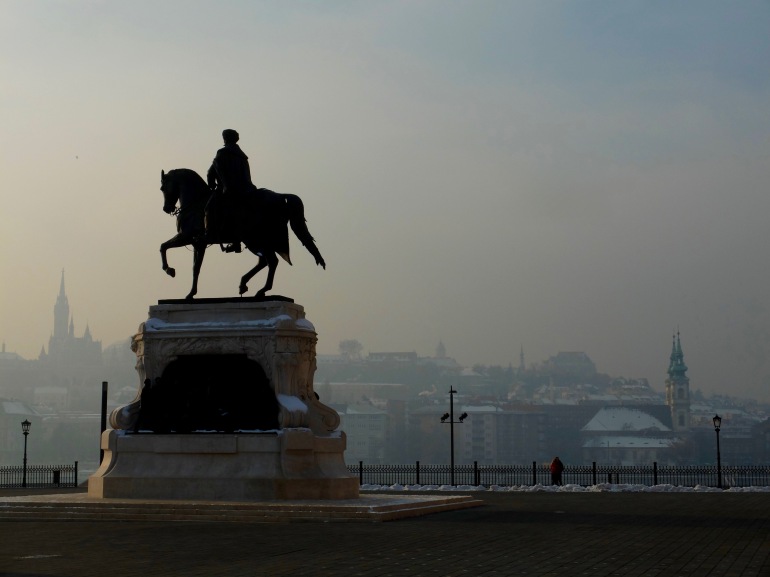 On to busier, more crowded sites, we found ourselves headed to Fisherman’s Bastion on a day of light snow. Built in the late 1800s/early 1900s, it was never meant to serve as an actual fortification. Instead, this fairytale tower was built to offer the best panoramic views in Budapest.

Another great viewpoint is Gellert Hill, but the Fisherman’s Bastion is much easier to reach in inclement weather!

Once again, an attraction that is not to be missed! If it wasn’t so cold, we could have easily spent our entire morning here and stayed for lunch! We didn’t experience much of the views due to fog that stayed with us our entire week in Budapest, but the fortification itself is stunning.

And the dusting of snow attempted to hush the sounds of large tourist groups rushing through. Always hurrying on to their next site, I like that we take things at our own pace, wandering wherever we choose.

It means we can appreciate moments and locations that don’t make it into the top 5 attractions of a city, even when they can be found nearby. As we made our way to Buda Castle, I made Chandler pause countless times so I could photograph the snow and everything it touched. Cold or not, I was going to get everything I could out of my first snow in three years!

And now I’ll admit, even my best plans sometimes go awry. Like when we accidentally made our way to the library inside of the palace complex, instead of the Szabó Ervin Central Library – not sure how I got those names mixed up, but if I hadn’t, we would have missed this incredible view of the Széchenyi Chain Bridge: 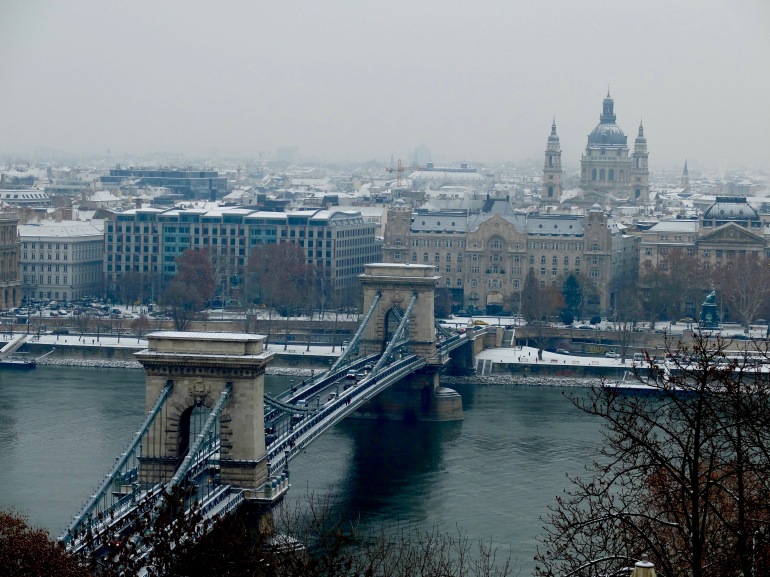 So, despite the constant cold, we had a wonderful time outside in Budapest! Though we’ve definitely learned our lesson for next winter: We’ll be dreaming of a [warm] Christmas.