As I lie in bed, sick in Accra, I count my blessings that Chandler and I managed to stay healthy during our European Christmas. Three weeks in below or at freezing temperatures and it’s a testament to our immune systems that we didn’t get sick.

As a Grade 2 teacher, I wasn’t as lucky. Kids are sweet, but sometimes I think they’re less hygienic than animals – cats lick themselves clean and monkeys pick bugs off each other.

And now here I am: I finished watching season 2 of The Good Fight, season 5 of Younger, and every single film up for an Oscar (best actor & actress included). I don’t really feel like reading, so I’m writing instead. Recounting our time in Vienna, where, thankfully, we didn’t get sick.

After our first few days of museums, we realized we still needed to be spending as much time indoors as possible – the weather was warming up, but the wind was still brutal and not enough small shops had reopened, meaning we couldn’t pop in and out of places at our leisure.

At the time, the top three activities listed on TripAdvisor for Vienna were: Schönbrunn Palace, Imperial Palace, and the Belvedere Palace. And while we like ourselves some palaces, we didn’t think we needed to see all three. So we picked Schönbrunn…because it’s number one and then we had a friend recommend the Belvedere.

We started at the Belvedere. Because A) It was close by and B) It seemed like a whole day affair. We bought a pass that included entrance to the Upper Belvedere, Lower Belvedere, and Belvedere 21.

You might think that since all three buildings take up space inside the same compound, that they might open at the same time. You’d be wrong.

Upper Belvedere opens first, at 9 am. The Orangery is home to the world’s largest collection of Gustav Klimt paintings. Not an avid fan, but it’s what you go to see.

One of his most famous pieces is The Kiss (left). By the time I got to see it, I had already seen it on just about every form of memorabilia you could buy: Like The Kiss? Do you want it on a handbag, plate, deck of cards, tissues, necklace…the list goes on. That made it hard to be impressed.

My favorite Klimt ended up being Judith and the Head of Holofernes (right). But the gold in his paintings did make them a lot of fun to look at.

What I actually loved about the Upper Belvedere weren’t the paintings inside, but the structures that made the building itself – unsurprising that although it’s now a museum, it used to be the summer residence of Prince Eugene of Savoy.

Next we were off to Lower Belvedere because it had opened next, at 10:00 am. The Palace Stables were home to a handful of overly decorated rooms, but with my love of chandeliers, I was not disappointed. 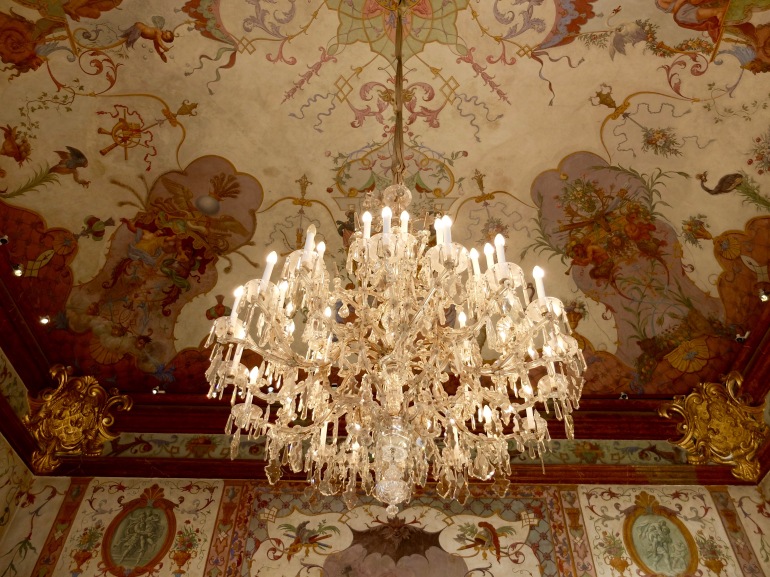 I loved the shabbiness of the room, paired with the clean lines of the chandelier. The rest of the artwork was not really my style…

Chandler and I always joke that we have to rush through the religious artwork of any museum to get to the good stuff. Well, Lower Belvedere had an entire stable dedicated to paintings that aren’t really to our taste:

But the weirdest building we went into was easily Belvedere 21. Since 2011, this space has housed contemporary art from Austria, as well as temporary international exhibitions.

My favorite piece was something we stumbled on in the basement just trying to find the bathrooms:

Everything else was upstairs. And even more bizarre. There were a lot of mannequins,  a lot of videos, a wall of contracts, and a diorama that my 2nd graders could have made look nicer.

But, it was fun to say we did them all.

You’d think that’d be enough for one day, but we decided to squeeze in the State Hall of the Austrian National Library as well. Eight euros for just one room was a hard sell for Chandler. He figured we’d be in and out in 15 minutes.

But, I have to say, we were delighted by all of the displays and information available in the library. We ended up spending more time inside than we did at Belvedere 21 (ok, not too surprising).

Also on display was the oldest card catalogue in the world. But it wasn’t very photogenic, so you’ll just have to take my word for it. It was created in 1780 by Gottfied van Swieten. All materials in the Court Library were recorded on moveable index cards instead of the previously used bound index books. The project produced a total of 300,000 cards stored in 205 capsules. I think I might have hated to be that librarian!

The next day we were back at the palaces. This time, the Schönbrunn. First thing I noticed? From a distance, the façade looks a bit like a paper house. Many of the columns look two-dimensional instead of three.

The dreary, winter skies didn’t help, but the Schönbrunn ain’t got nothin’ on the Belvedere. 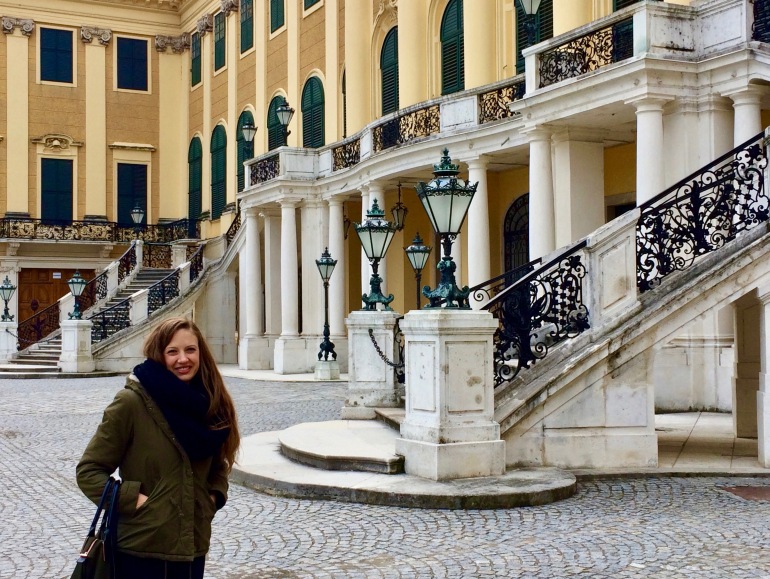 Also, fun fact. You can’t take photos inside the palace. Although that didn’t stop a woman next to us from sneaking her phone in and out of her pocket pretty much nonstop. Three different guards noticed and asked her to stop…pretty tacky.

But it was fine. The palace was beautiful but run like a well-oiled machine, and I don’t mean that as a compliment. There were probably another 20 people with us in each room and everyone is given a headset. You listen to the 30-90 second spiel and then are expected to walk into the next room to keep up with the group. Forty rooms in fifty minutes. They’re not joking around.

The gardens out back are definitely worth a stop in the summer. Not a lot to see in the winter, but the trees did protect us from the wind as we made our way to the palm house. We didn’t go inside, it’s gotten mixed reviews, but we wanted to see it because A) It’s beautiful and B) It was the last of its type to be constructed in continental Europe (1881-1882).

And that was most of our time in Vienna. We ate a lot of great food: Veggiezz, Tian Bistro, and Swing Kitchen among the highlights. We went to a ton of Christmas (and New Year’s) markets – not really our thing. And I learned something very valuable about myself: Just because everyone’s doing it, doesn’t mean you have to : )

Vienna is known for its beautiful cafes, and stunning though they may be, they’re not worth waiting in line for. We walked past Café Central a number of times before finally braving the cold to stand in line. It took about 45 minutes to enter the cafe that opened in 1876 and was a meeting point for people like Sigmund Freud and Leo Trotzki.

But you know what? Their chocolate cake was dry and the orange gel in the middle too sweet. I guess that makes my tastes plebeian, but I’ll take Betty Crocker brownies over their cake any day. Though their hot chocolate (me) and fresh-squeezed orange juice (Chandler) was pretty good.

All-in-all, though lovely to look at – it is a UNESCO site, after all – the cafe was filled with overly-loud tourists (one group took selfies the ENTIRE 30 minutes they were there) and over-worked waiters. But I’ll carry that lesson (that I probably should have learned a long time ago) with me.

All that’s left for me to write about is our New Year’s Eve celebration in Prague! But that will have to wait for another day. For now, I’m going to drink another cup of tea and get started on season 2 of This Is Us : )