With just a few weeks left in Ghana, we’ve begun sorting through our belongings. Everything falls somewhere in these three categories: Pack in one of the five suitcases we’re leaving with, get rid of the week of June 3rd, or get rid of immediately.

It’s amazing how quickly you can clean out your home when you’re this organized : )

But people often forget that their electronics can become just as cluttered as their home. So I’ve been sorting through emails, music, photos, and teaching materials on my laptop as well.

Which leads me to this blog post: In November, 2015, Chandler & I had a long weekend in San Antonio, following Thanksgiving. And because it fell during our limbo time – we were living in the United States, but we didn’t know when we’d be moving back abroad – I had decided not to post any blogs.

I thought, living in the United States, I wouldn’t have anything interesting to write about, since, up to that point, I had only ever posted about Peace Corps or backpacking in SE Asia.

It wasn’t until after we’d moved overseas again that I realized just how silly that line of thinking is. There are so many incredible things to see in the United States – most of which, I haven’t seen.

But the San Antonio Missions are something that I have seen. And they’re definitely worth a belated blog post. 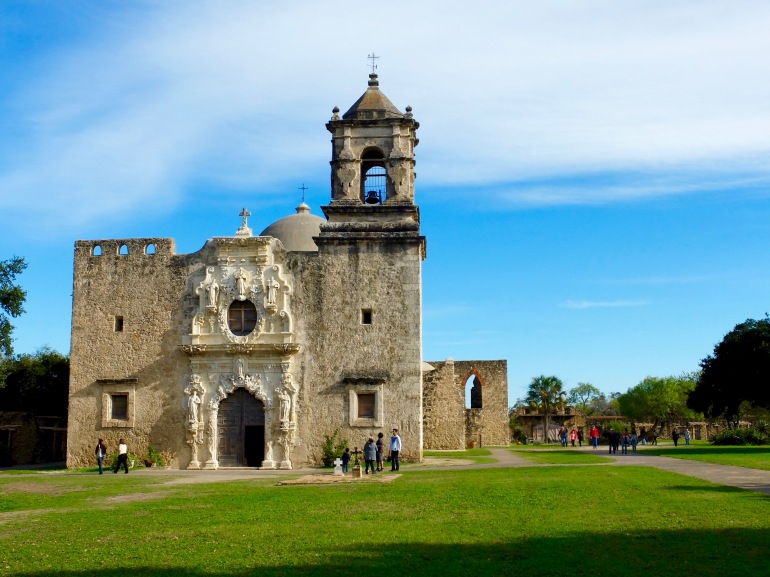 We started our day at Mission San José. Considered the strongest and most beautiful of the missions, it was established in 1720. In the 1930s, the WPA (Works Projects Administration) restored the church to its original design.

Not all the missions have had a facelift, so it’s nice to compare the structures that have been worked on, with those that have been left to their faded glory.

Mission San José is also home to the park’s Visitor Center. That, plus the gorgeous gardens, probably explain why we spent more of our time here than at any of the other missions.

Next we made our way to the southernmost mission, Espada. Established in 1690, in East Texas, it was the first mission in Texas.

It was moved to San Antonio in 1731. It was the most isolated of the missions. Famous for their woven arts, you can still view a working loom and they have live demonstrations every week.

We made our way north to Mission San Juan. Also established in East Texas (1716), it was moved to San Antonio at the same time Mission Espada was.

Special to this mission is their historic demonstration farm where the San Antonio Food Bank cultivates historical crops.

Mission Concepción was established in East Texas at the same time as Mission San Juan and was the third mission to be moved to San Antonio in 1731.

Concepción is the oldest unrestored stone church in the United States and you can still see beautiful, original fresco paintings.

Our final stop that evening was the Alamo. Established in 1718 as a way station between the settlements along the Rio Grande and the new missions in East Texas, it was easily my least favorite mission. Located in the heart of San Antonio, it doesn’t have as much space for the beautiful gardens or charming grounds found at the other missions.

Not actually a part of the San Antonio Missions National Historical Park, the Texas General Land Office now overseas the mission. Home to the historic Battle of the Alamo, the grounds include a museum, amphitheater, courtyard, and more exhibits. The church and grounds are free to visit, just like the rest of the missions.

With over four million visitors each year, it was significantly busier than the other missions. While I’m glad we saw it (because how could you not?), I’m glad the majority of our day was spent visiting the other four missions.

That said, it’s a lovely spot to watch the sunset, so I couldn’t really complain…

And now, in just two short months, we’ll be back in Texas. It’s been three years since we left, and we’re excited to see everyone and eat some great food! T-45 days, Texas.