A rocky plateau 370 meters above sea level, Sigiriya Rock is 200 meters higher than the surrounding jungle. Referred to by locals as the Eighth Wonder of the World, this fortress includes remnants of a palace surrounded by fortifications and a vast network of ponds, canals, and fountains.

The area served as a Buddhist monastery from the 3rd century BC to the 5th century AD. Then, King Kashyapa chose the site for his new capital and a royal residence was built. However, after his death, the area was abandoned and once again became a monastery until the 14th century. Designated a UNESCO World Heritage Site, the palace and surrounding complex is recognized as one of the best examples of ancient urban planning.

During preliminary research on Sigiriya, Pidurangala Rock also came up as a popular stop. A shorter hike (20 minutes, compared to the 3 hours Sigiriya can take) and a cheaper hike (2.75 USD, compared to 30 USD), I struggled to decide which hike to choose.

Pidurangala has none of the history that Sigiriya has. In fact, as far as I knew, it was famous for only one thing: Incredible views of Sigiriya. But, as many of you already know…I’m a sucker for good views.

And then I came to this simple realization: It is unlikely I’ll return to Sri Lanka (at least anytime soon), so I might as well do both. Luckily, it’s easy to convince Chandler to do physical excursions and so we soon had plans to visit both sites.

We started our day in Anuradhapura and drove the 90 minutes for our first hike up Pidurangala Rock. Described as a “moderate” hike, it was surprisingly easy, with stone steps to follow most of the way.

The big surprise was that you can’t get to this staircase without passing Pidurangala Vihara, a temple. As with all temples in Sri Lanka, this required the removal of our shoes and starting our hike barefoot. This wasn’t a big deal, because we were both hiking in our “adventure” sandals, but it was a bit annoying since it had rained earlier that morning, making the ground a bit stickier than it otherwise would have been.

Once we were allowed to put our shoes back on, the hike went pretty smoothly. Not more than ten minutes later we were nearly to the summit and we had our second surprise of the day: This giant reclining Buddha statue.

From that point on, I understand why the hike is deemed “moderate.” The path disappears and you are literally climbing boulders. The last bit only takes a few minutes or so, but it is a very different vibe than the rest of the hike.

It doesn’t matter, once you make it to the top you are rewarded with this incredible view:

Sigiriya, in all its glory. The top of Pidurangala is surprisingly large and we explored the cacti and other flora growing, but it was this scene we kept turning to over and over again. We shared it with a group of four friends, another couple, and two buddies. It was a pretty chill experience.

I wish we could have stayed longer, but we could already see the queue lining up for Sigiriya. We had our last looks and made our way down. The experience took us about an hour (though you could easily stay longer if you packed a snack!) 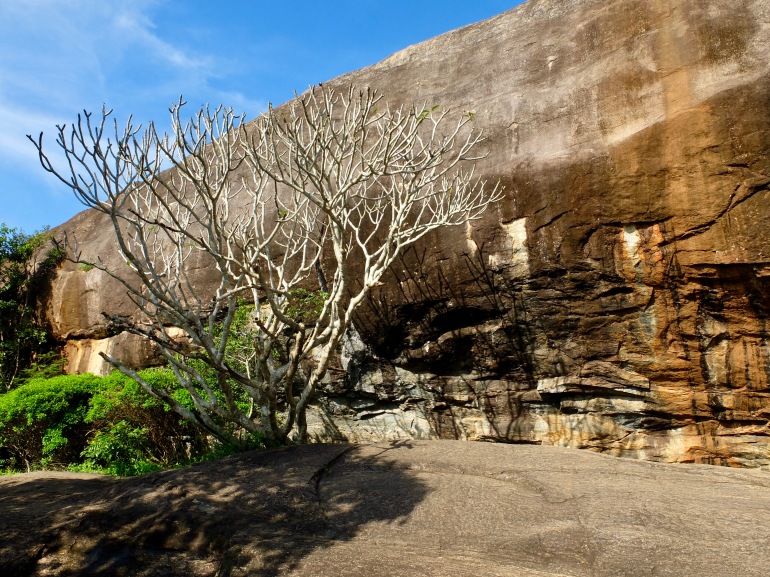 We made the quick drive to Sigiriya only to find that Google Maps had led us to the local entrance, not the foreigner entrance. Back in the car we went, more than a few kilometers away, until we were convinced we were going in the wrong direction. Just when we felt like giving up, we arrived.

We left the car park and made our way to the museum. That’s where foreigners can buy tickets. We got in line, paid our 60 USD (the most expensive thing we did in Sri Lanka), and then walked the grounds. A few minutes later, we got in a second queue to have our tickets stamped, and we were officially “inside” the grounds.

The landscape was beautiful with lush trees, abandoned stones, and hardly a person in sight…

Until we found our third and final queue for the day. The photo below doesn’t do our line justice. There are 1,250 steps from bottom to top and we could never take more than one or two at a time without stopping. Imagine standing in line for the most popular ride at Disney World on their busiest day of the year.

I think our line was worse.

What could easily take less than an hour to climb took three hours based solely on the crowds. Most people were pretty chill, but I’m telling you, the older Sri Lankan women know how to throw elbows. Even when the rest of us were standing still, they weren’t about to let anyone slow them down. 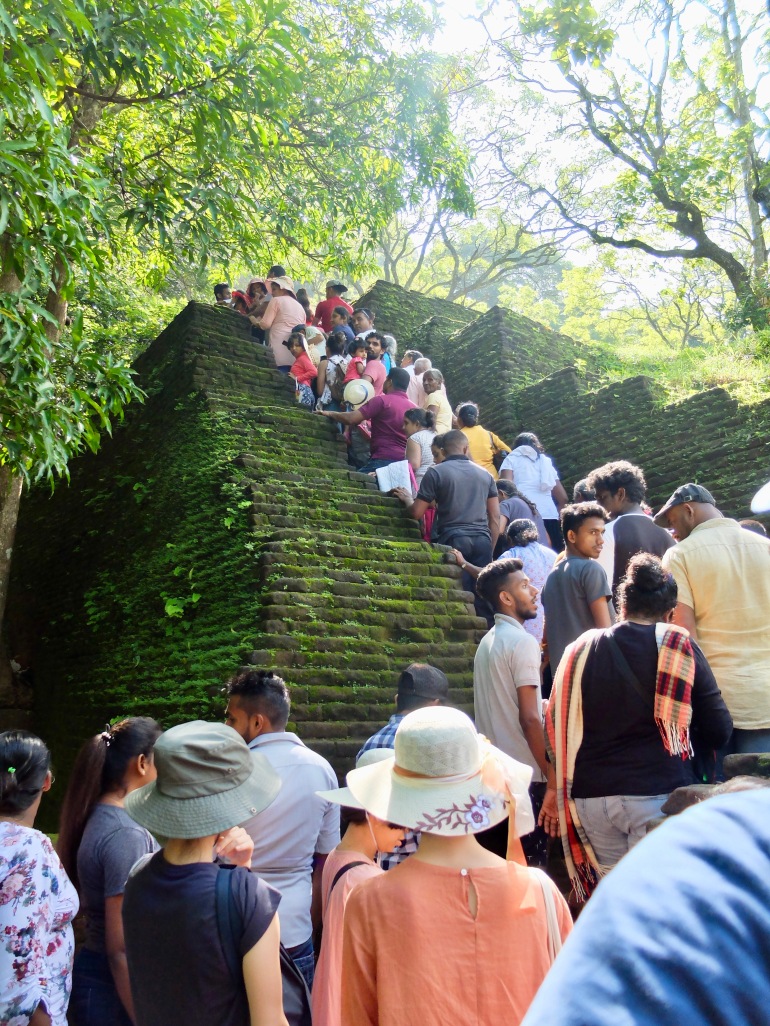 It was bizarre to be in an unmoving line while on a “hike.” I can’t say my heart rate every moved beyond “resting” – which was not the case for our earlier hike of Pidurangala.

But we passed the time talking about how strange the experience was and photographing the countless monkeys that call Sigiriya home. It was baby season, so the monkeys were looking particularly cute.

The stairs up are broken up into different sections. First, you have the stone steps pictured above. There actually aren’t that many of them, but I think that stage took us at least 45 minutes.

Then you make your way to a spiral staircase. I thought this was the way up – no. It is the (required) way to a series of 18 nude female frescoes that I didn’t even know existed and might have been impressive if I wasn’t shuffling in a line (oh, and no photos allowed).

After that, you go back down a spiral staircase and continue on to the Mirror Wall. Apparently, in its time, it was polished so thoroughly the King could see his reflection in it. Nowadays, it just looks like a stone wall.

A short (in distance, not time) walk later and we were at the main entrance on the northern side of the rock. Designed in the form of a huge stone lion, all that remains are its paws.

Here, you can get out of the line and walk around. There are some questionably sanitary water stations and some beautiful views in their own right. We didn’t stick around long and soon found ourselves back in line.

We essentially repeated everything we had just done (minus the spiral staircases and nude paintings) and finally made it to the top!

The ruins at the top are pretty impressive, the but three hours it took to get to them had dulled some of the anticipation.

That said, despite being at the site with hundreds of other people, there were some locations practically deserted (pictured above). Other areas were incredibly crowded (the viewpoint below for example) and it surprised me how large the space was.

The strangeness of being at a UNESCO World Heritage Site after jumping through so many theme-park hoops definitely made the experience unique.

The ruins were interesting, but if I’m being honest, the views from Pidurangala are superior. From Sigiriya, you see the entire surrounding jungle + Pidurangala (pictured below). Which isn’t quite as impressive as our viewpoint from earlier that morning.

We were ready to say Sigiriya wasn’t quite worth the effort when we ran into some friends of ours from Jordan. We knew they’d be at Sigiriya that day, but we didn’t know what time and with the sheer number of people around, we never thought we’d find them. But find them, we did.

Which made the experience of hopping back in line to slowly (but not as slowly!) file down the rock much more entertaining. They had had a similar experience, but they had started with Sigiriya and were no longer in the mood for a second (albeit better) hike.

So, if you’re like we were and are debating which hike to do, I would 100% endorse Pidurangala over Sigiriya. If that bothers you, because you want to actually visit the UNESCO site (which, hey, I get. We did too!), I’d recommend doing the reverse of what we did and start at Sigiriya. Yes, I loved seeing Sigiriya from a distance before climbing it, but it’s just not worth the added time the line takes.

Meaning, if you’re going to do both hikes, start at Sigiriya as soon as possible. It can take less than an hour to get to the top if you get there before the lines (the site opens at 7:00 am). Pidurangala opens as early as 5:00 am, but most people drive in from Kandy or Dambulla, making that arrival time pretty unrealistic.

If you start at Sigiriya, it means your Pidurangala hike will be a bit more crowded than it was for us, but I promise there’s no way it gets as busy as Sigiriya. You’ll still get your great photos, but it won’t take you all day. 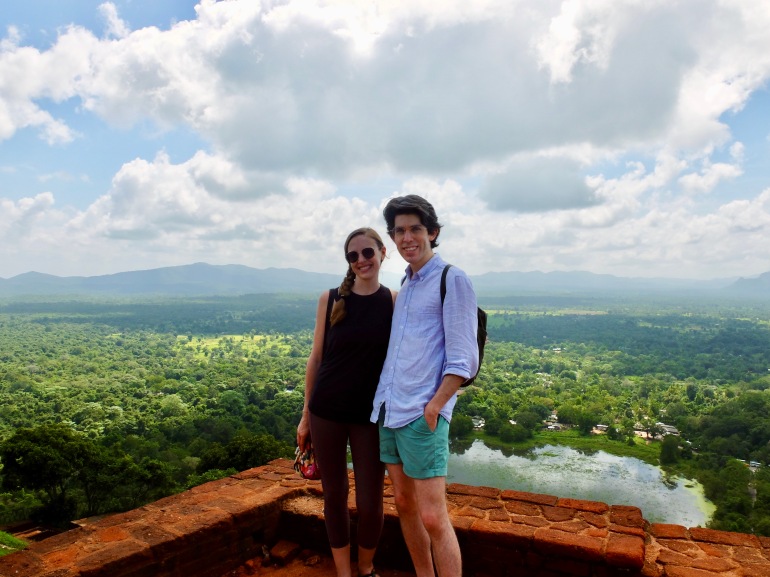