Before we actually made it to the beach in Sri Lanka, we found ourselves water-adjacent a number of times.

We flew into the Colombo International Airport in the evening, and instead of getting a taxi into the city, we went north to the beach town of Negombo.

The purpose of the stop was to rest and rejuvenate before really “starting” our vacation. It was perfect. We spent a full day in Negombo and that was all that was required. Our hotel had a nice pool and the food scene in town was ok. However, I wouldn’t recommend spending much time at the actual beach. 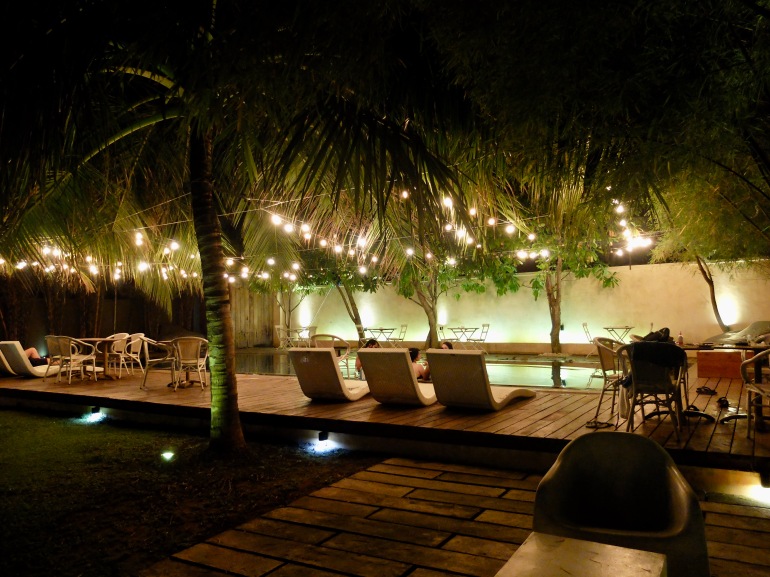 Our second full day in Sri Lanka required a four-hour drive to Mirissa. Since we rented a car, we were able to stop in Galle for some lunch and a visit to the Dutch fort. The town was totally worth the stop, though an overnight would have felt unnecessary.

We had lunch at Dumplings Cafe and the bao – hard to find vegetarian – was heavenly. So were the dumplings. We got a little touristy in the shops that line the streets and I bought a linen dress and some postcards. The rest of our time was spent at the lighthouse and walking along the fort.

Built in 1588 by the Portugese and heavily fortified by the Dutch in the 17th century, the fort is now a UNESCO site (hence the stop).

The area was pretty crowded, but then, a lot of our time in Sri Lanka was.

Luckily, the drive from Galle to Mirissa is only an hour, and the stop was a great way to break up what would otherwise have been a fairly long drive.

We arrived in Mirissa in the early afternoon, had an early dinner, and watched a beautiful sunset from the balcony of our hotel room.

Mirissa is famous for its whale-watching and that is a large part of why we chose this beach over the many others in Sri Lanka. However, the more we read about the experience, the more apprehensive we became.

The vibe we started to piece together included being packed on tourist boats, traveling for an hour+, seeing a whale, battling with other boats to get the best view, meanwhile crowding the whale.

We try to be as eco-conscious as we can while traveling and this just didn’t seem like a good fit for us. Instead, we opted for more beach (and pool) time. *The following week we met up with some friends also traveling in Sri Lanka. They had chosen to go whale watching and confirmed our suspicions that, while seeing the whales was incredible, they were pretty uncomfortable about the process.

Our first morning in Mirissa found me doing my yoga practice in the jungle at Surf and Yoga Mirissa. We had eaten dinner at their restaurant, Ahmisa Vegan Cafe, the night before and saw signs for the classes.

It was a private session, which was pretty cool, but I have to admit, it’s incredibly hard to relax in shavasana while dengue mosquitoes nip at you.

It’s hard to make a timeline of the rest of our time in Mirissa. We pretty much ambled our way from meal to beach to meal to pool back to beach.

As someone who has never quite been able to decide how I feel about the beach, Mirissa finally gave me words to describe it. I hate crabs, I hate trash, I hate being afraid of someone stealing my stuff. But I love being in the water and flowing with the waves. The gentle up, down motion and keeping an eye on the horizon. It’s the closest I’ve ever come to meditating.

Of course it helps that Mirissa Beach was nicer than I expected: No crabs, no trash, and Chandler sitting in the shade, watching my stuff : ) 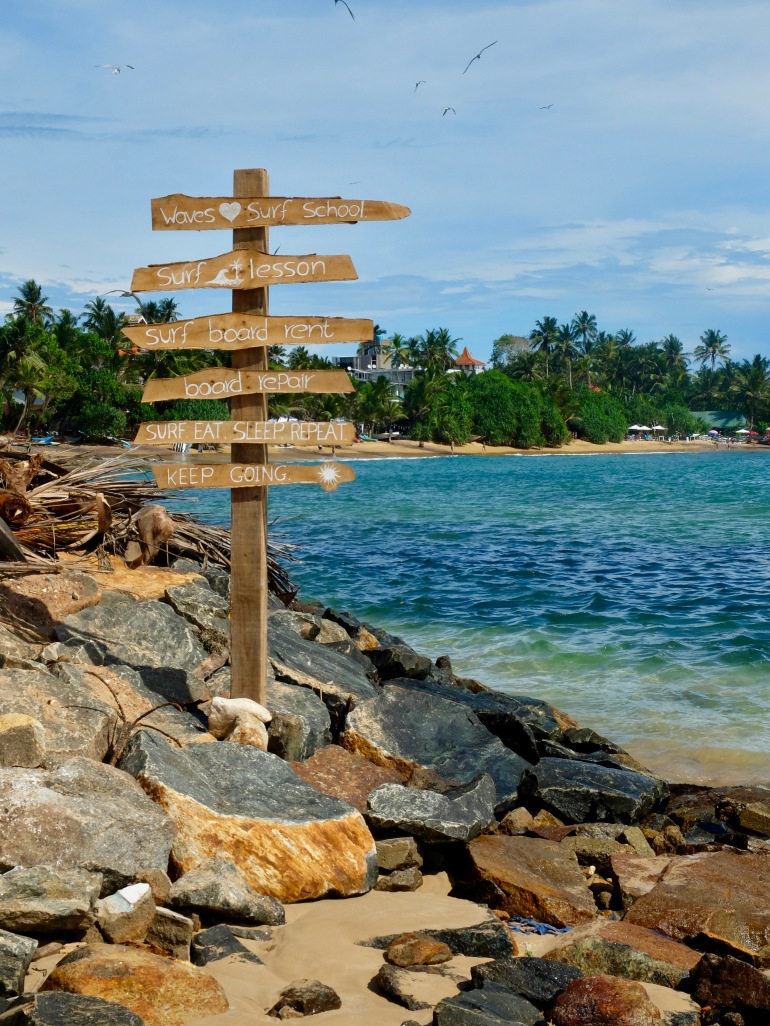 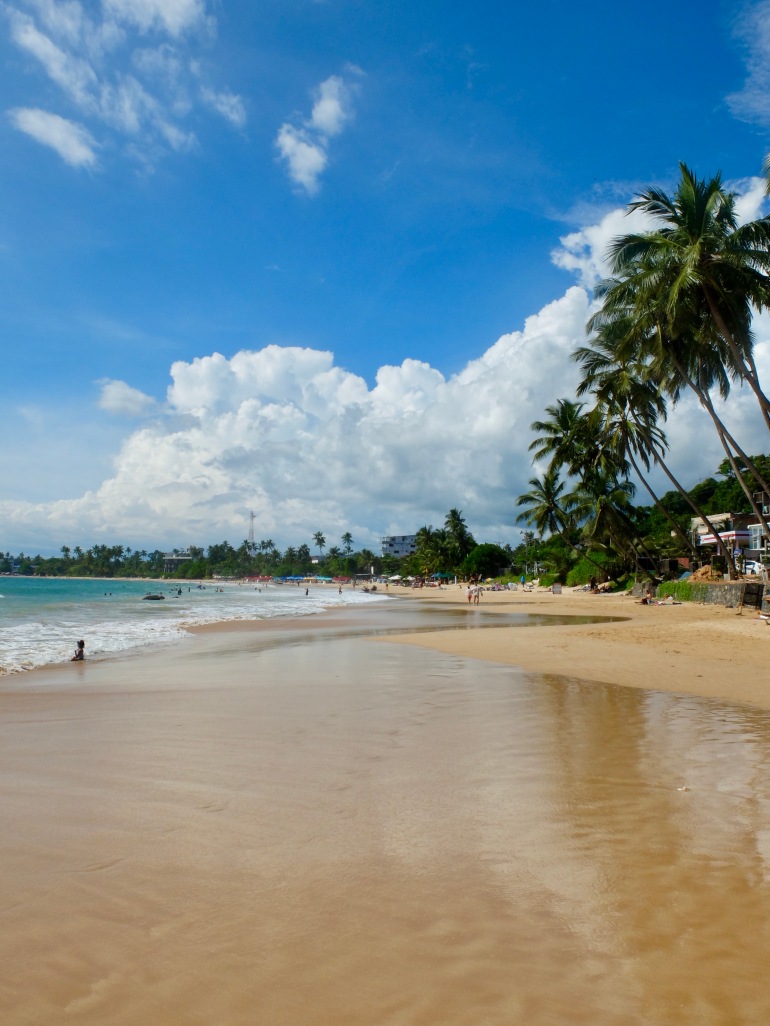 Mirissa Beach may not be all that long, but it does have interesting features as the shore changes from sand to rock, the farther east you walk. And just as it’s changing from swimming to surfing, there’s a small island within easy reach. It even has the remnants of stairs someone created to make climbing more accessible.

The first time we explored the island, I left my camera behind, knowing I didn’t have waterproof features. The second time we went I risked it to try and capture some of the beautiful views of the shore and sea.

We didn’t spend our whole time at the beach, we also spent plenty of time eating. For two reasons: We love eating and nothing in Mirissa happens quickly…especially the food.

Despite the wait times, we really enjoyed our meals at Shady Lane, Wood Space, and Dhana’s Curry Pot, all of which had an abundance of vegan/vegetarian options to choose from. We had a smoothie bowl for nearly every meal! 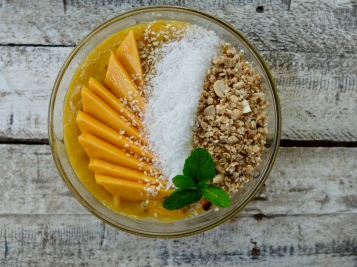 Tea plantation aside, this was probably the most relaxed we were in Sri Lanka. Nowhere to be and not much that “had to” be done.

And it didn’t hurt to spend each evening looking at this view: