Since moving abroad, my birthdays have been pretty special and this year was no exception. Thanks to our school celebrating President’s Day a day early, we got a three-day weekend and we decided to spend it at the Dead Sea.

Our last trip to the Dead Sea was winter of 2017 and while a fun experience, it was not without its difficulties. This time around, we were determined to do it right.

We booked two nights at the Kempinski Hotel Ishtar Dead Sea and it did not disappoint. With 345 rooms, suites, and (royal!) villas, it was definitely the luxury we were looking for on our previous visit. The rooms themselves are a little basic, but we weren’t there to be indoors.

Reminiscent of the hanging gardens of Babel, the grounds are flush with gardens, lagoons, waterfalls, and pools. They even have a sandy beach on the Dead Sea, a novelty in the area since most hotels are just rocks to water. 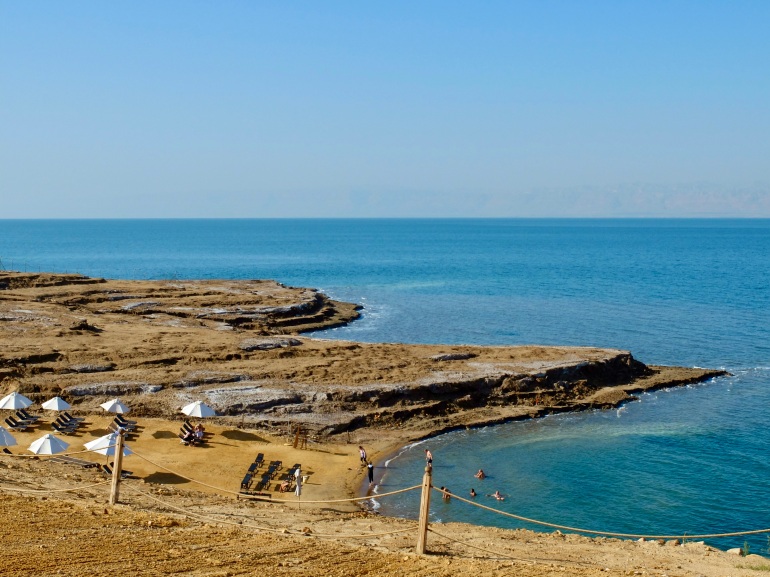 The last time we were at the Dead Sea, we did our obligatory float, but it was December and chilly and we couldn’t bring ourselves to stand outside, wet and cold, for 10-20 minutes to put mud on ourselves and let it dry.

This time around, while still windy, was a bit warmer. After a successful float (not that you’d know from the following photo), we scrubbed up with mud. Chandler, initially hesitant, got even more into it than I did : )

It was definitely the right call. After stepping out of the Dead Sea, having washed away the mud, our skin was shockingly smooth! I could easily see this become a a yearly (monthly???) ritual. 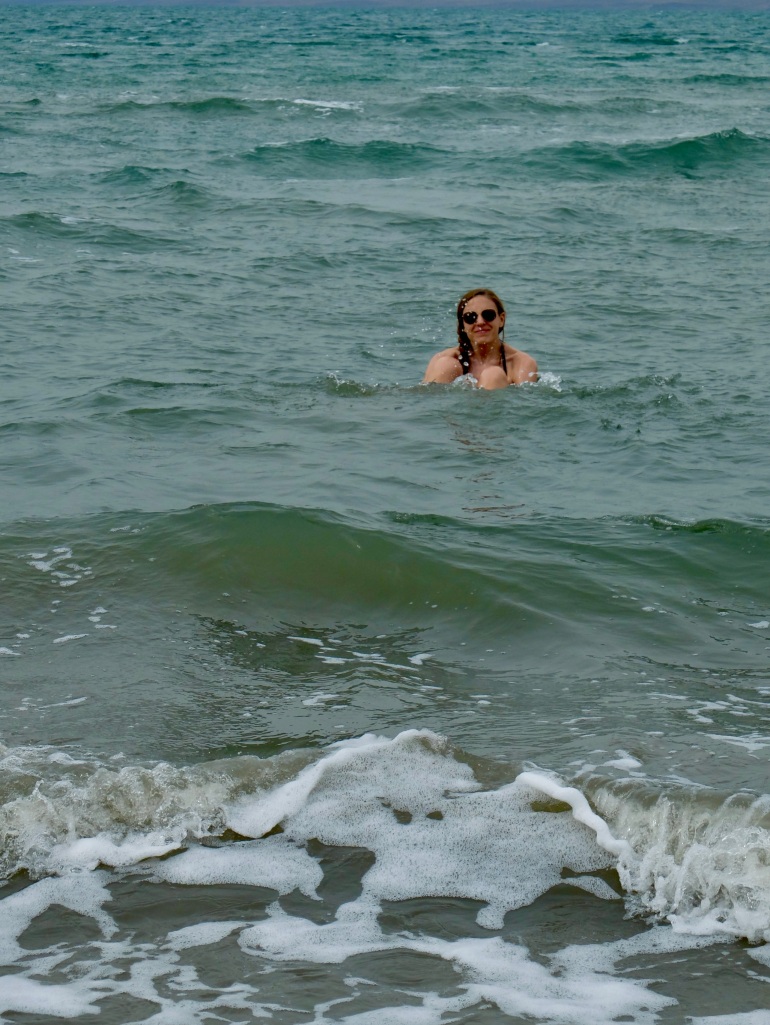 Due to salt content, it’s recommended you only spend 10-15 minutes in the sea at a time. Meaning, as unique an experience as it is, you’re actually not down at the beach for very long.

Even though the Dead Sea is 20 degrees Fahrenheit warmer than 45 minutes away Amman, it was still not warm enough to lounge around outside all day. That was fine by us.

We went on some gorgeous walks instead. Before breakfast and after dinner, the grounds were nearly deserted. One of the most secluded places was up near the spa and we watched some beautiful sunsets (cover photo included) from up there.

My favorite place to stroll was the walkway overlooking the sea. The water was shockingly blue and the bushes and shrubs provided a nice contrast to the rocks and sand below. 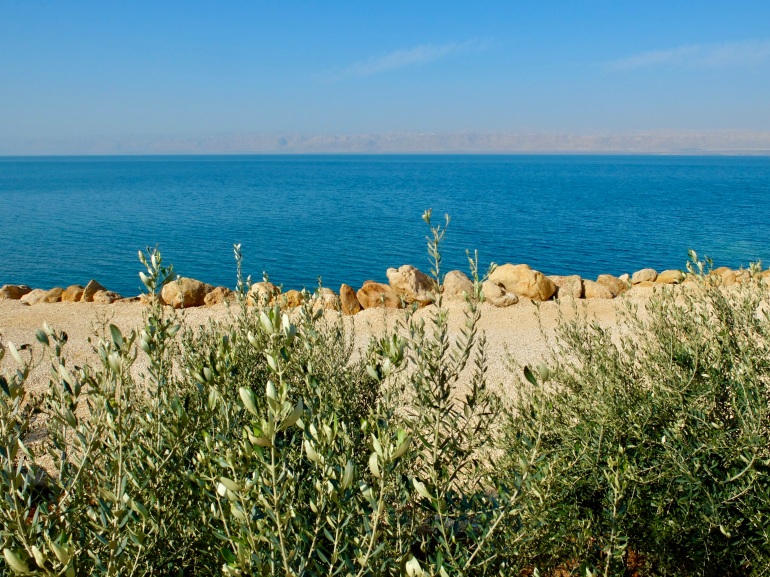 We got not one, but two gorgeous sunsets over the weekend. I am a sucker for sunsets that involve palm trees.

Another bonus? There are countless places to cozy up and enjoy the view in solitude.

I was 29 when I arrived at the Dead Sea and 30 when we drove away. It was a great place to celebrate a milestone birthday. And it was fun reflecting on all of the incredible places these first 30 years have taken me. We’ve been in Amman for six months now and we’re excited to see what the city has in store for us next. 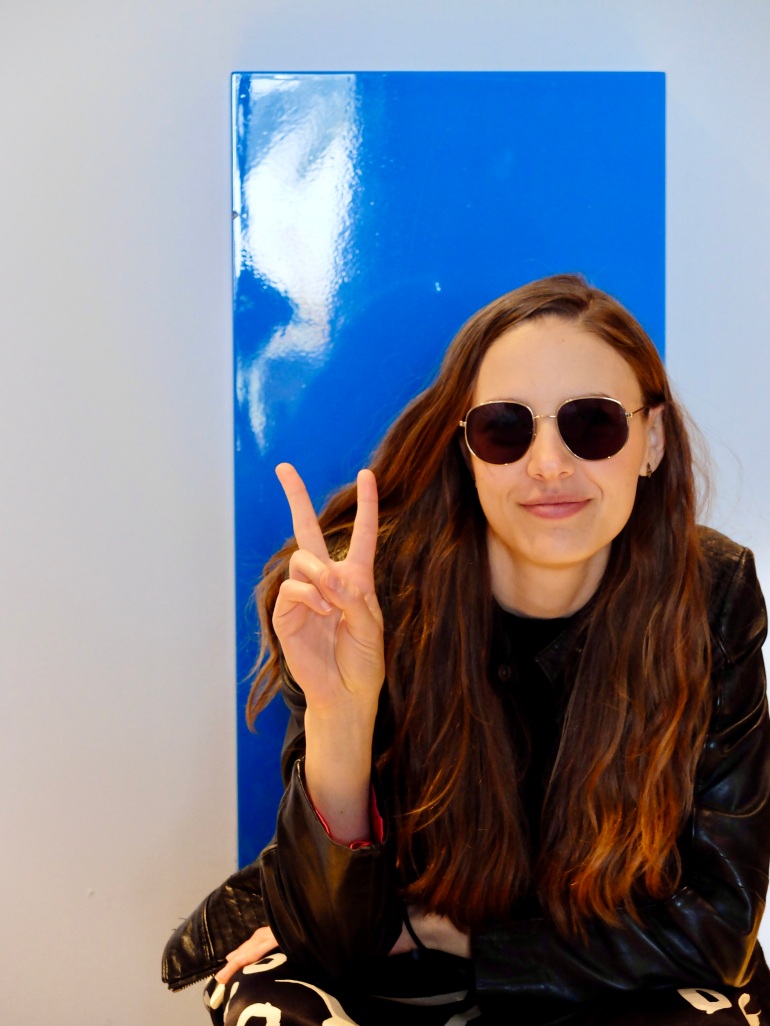