Let’s rewind to spring 2014: Chandler and I wanted to travel somewhere for spring break…but we needed to be thrifty (upcoming wedding in July & our move to Accra just a few weeks after). However, we didn’t do much advanced planning and the only thing that really fit our budget was a Caribbean cruise.

I tried to keep an open mind, but it just wasn’t for me. The stops were interesting (Chichen Itza was incredible!), but the sea sickness, lack of space, and absence of decent vegetarian food made the trip less than spectacular.

So when Chandler mentioned a cruise on the Nile, I was even more skeptical. Which, of course, he had already taken into consideration. He had done his research and National Geographic had recently listed the 21 Best Cruises in the World and, wouldn’t you know, they had one on the list that took you up the Nile River in Egypt.

The photographs were stunning and we couldn’t find a bad review about the company: Nour El Nil. Despite it being pricier than our average vacation (plus we still had to pay for a week in Cairo and a week in Jordan!), we decided to book a week-long cruise on their most affordable boat – the Assouan.

At 1,100 euros a person, it was hard to deem it “affordable,” but after our last cruise, I wasn’t going to save a few hundred on a cruise that had likewise cut corners to save a few bucks as well.

Plus, the Assouan had something no other boat on the Nile could offer: intimacy. With only eight rooms onboard, we’d be sharing the space with a maximum of 14 other guests.

We were picked up at our hotel in Luxor on Monday, December 18th. As soon as we saw the boats, we knew we were not going to be let down: 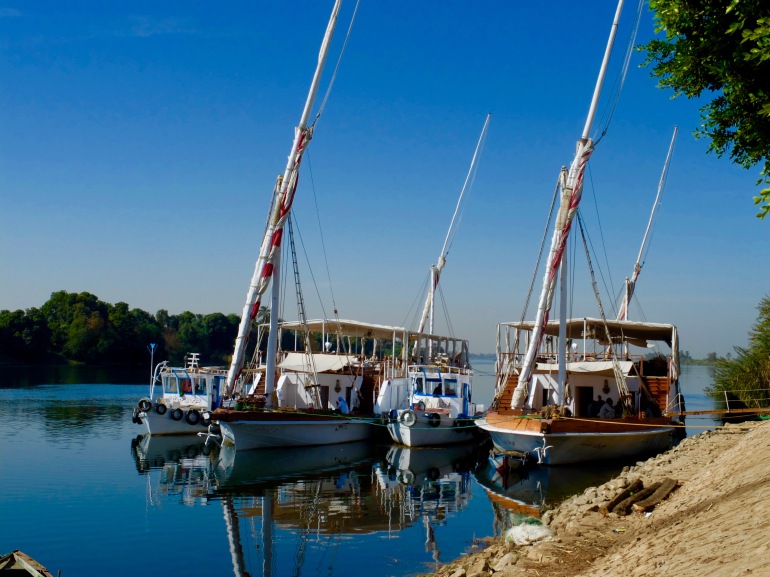 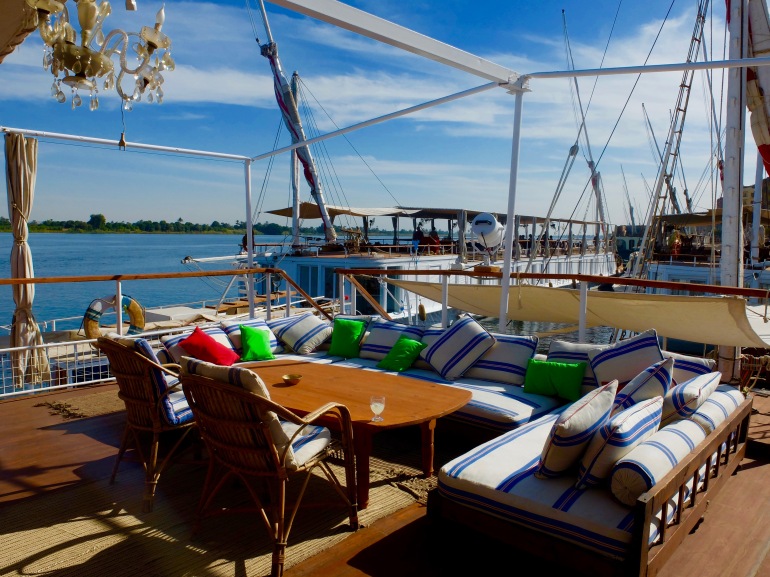 We’d been upgraded to the slightly larger El Nil, which holds up to 18 passengers, but were pleasantly surprised to find out we’d be sharing it with just six other people: An American couple from Seattle, a French & British couple from London, and Tunisian sisters from Paris.

And, for once in our lives, we were the least traveled people in the group! That alone made the trip worthwhile – hearing everyone’s stories and adding more trips to our bucket list. Many dinners were followed late into the night with wine, memories, and plans for future adventures.

Most days involved a stop at a historical temple or tomb, but even the scenery as we sailed our way up the Nile was spectacular. We had foolishly believed that so much of the river would be industrialized, but due to the Nile’s unpredictable flooding, very little was built within a mile of its shores. 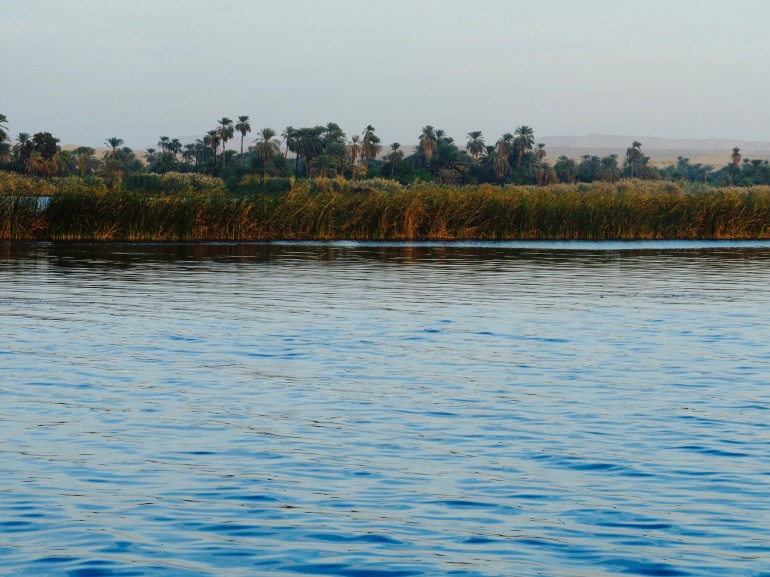 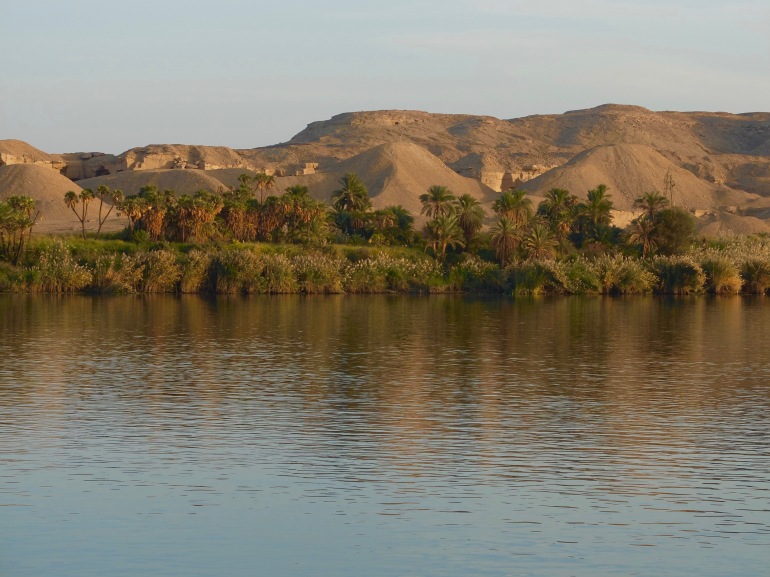 And what was built, usually added to the ambience. Whether it was ancient tombs or the more practical floating petrol stations: 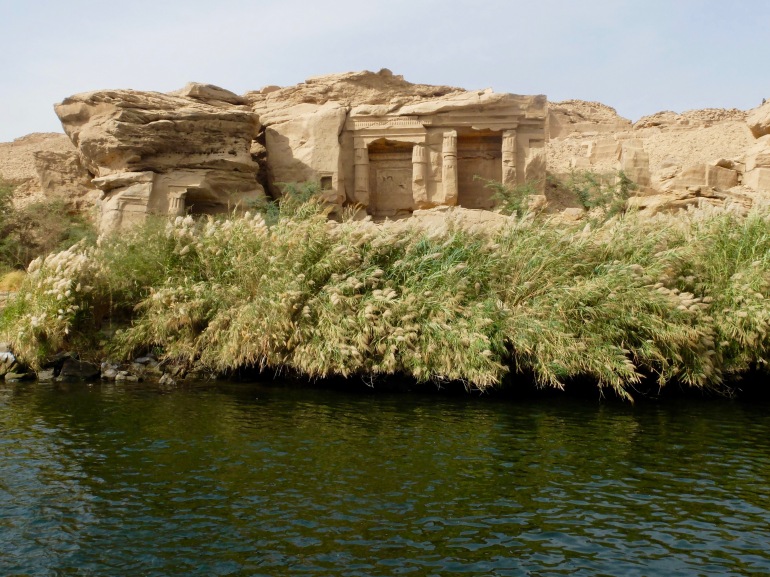 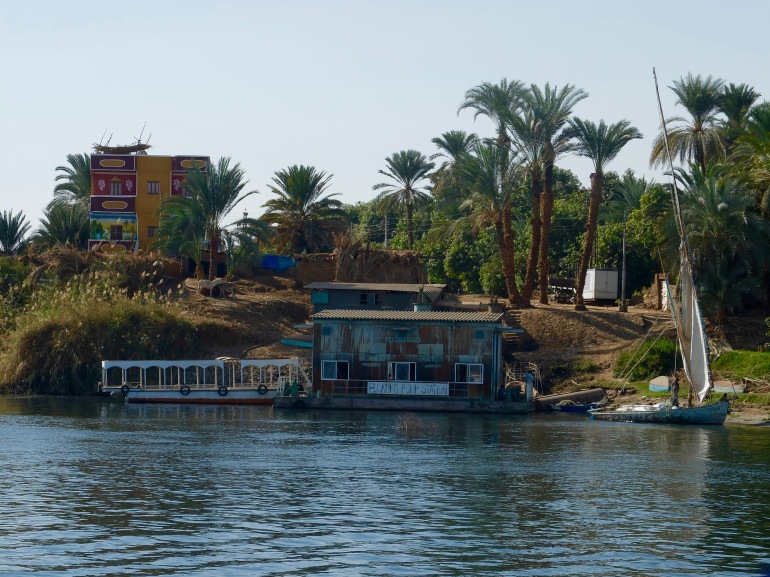 It was never too much time on the boat (which, anyway, is probably the most relaxing place I have ever been). Even on full sail days, we still stopped for some fun in the sun & Nile: 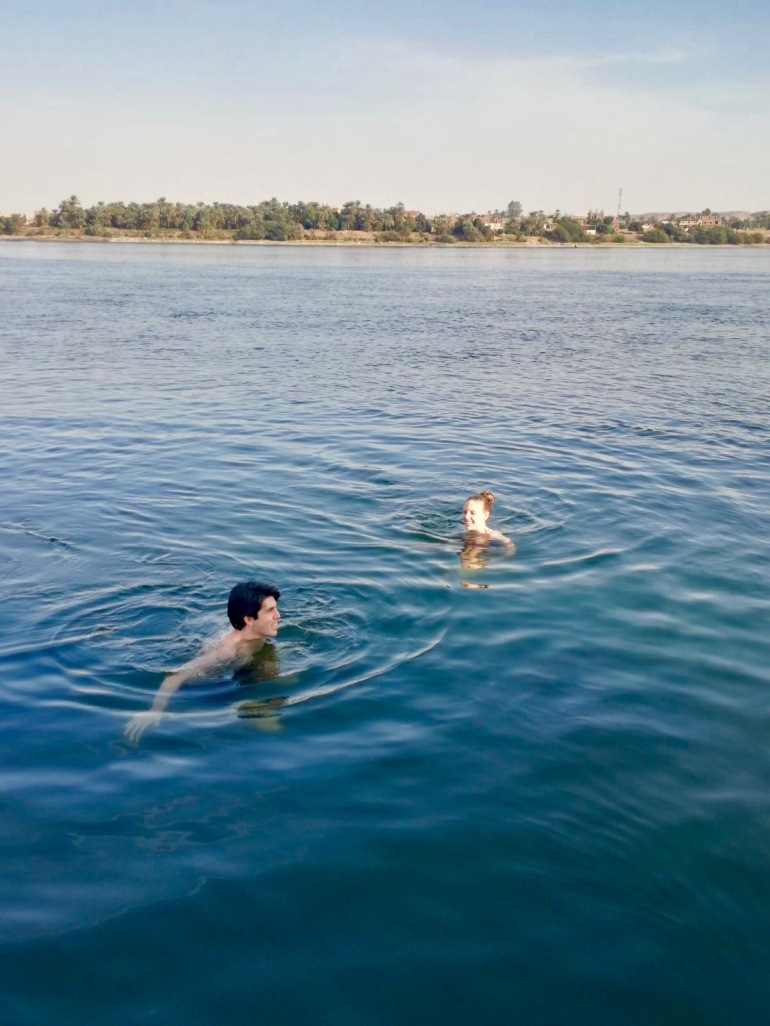 The staff onboard nearly outnumbered us and they were incredibly helpful. We were supposed to summon them with a bell whenever we needed anything, but the night I was tasked with the job, I couldn’t bring myself to do it and we ended up waiting half an hour after we’d finished our appetizers to get our main course – a tragedy, I know!

And the food was incredible! Made with fresh produce we picked up along the way, there was something new every day. Half of our boat was vegetarian, so there was a plethora of options to choose from – from finger foods to fancy, sit-down meals. 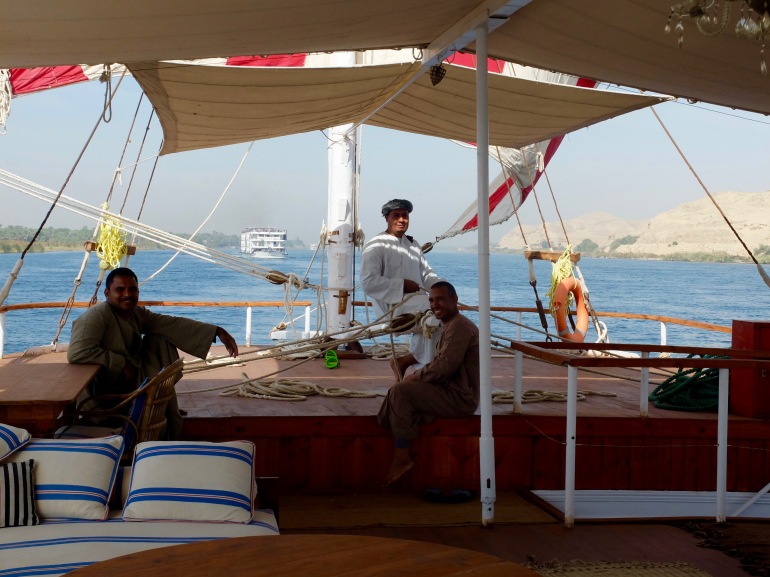 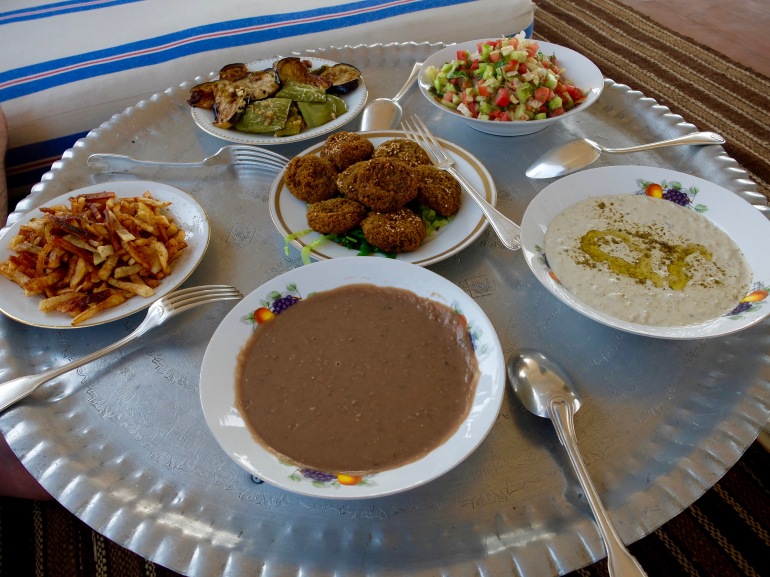 To give us a better sense of the culture, we went on strolls through local villages, to complement our stops at the temples and tombs. The crew also performed some traditional music and taught us some customary dances. 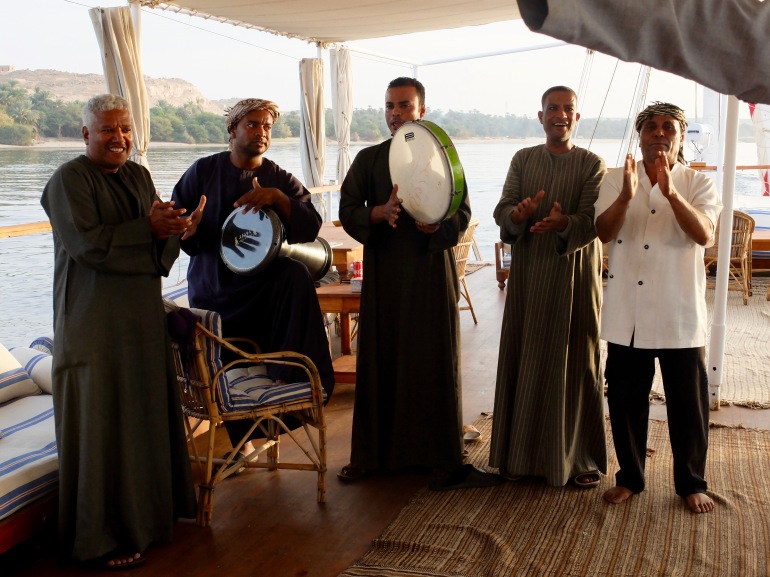 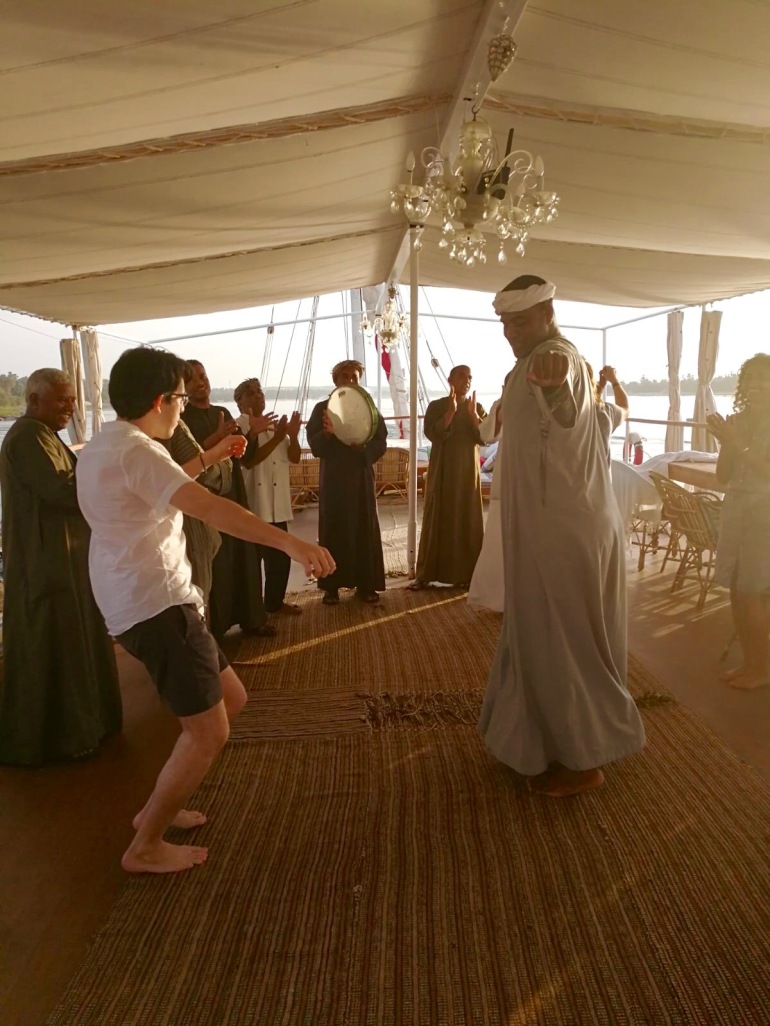 I would happily have spent another week on this boat, sailing and swimming and reading and seeing the sights. The rooms were efficient and clean, but most of our time was spent up on deck lounging. That’s the space I’ll miss the most – maybe someday I can create a replica in a home I own…though the views won’t be the same. 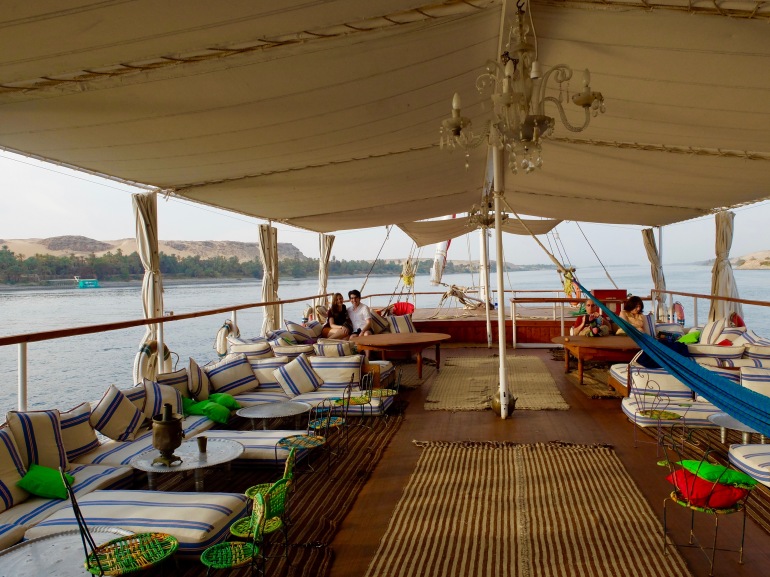 But alas, our time was up. Before we knew it, we were sailing into Aswan and our time aboard had come to an end. For a girl who hates cruises, this one turned out to be pretty spectacular. 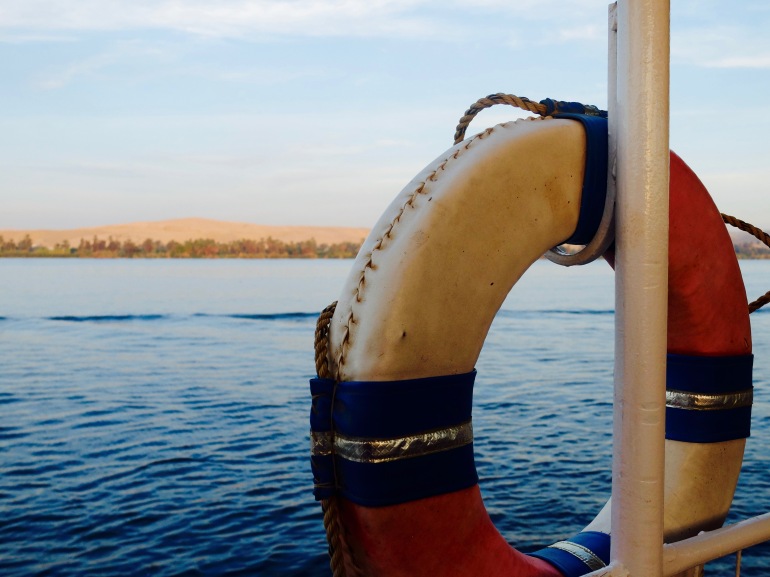 Update two months later: While I still think this cruise was one of the most incredible things I’ve done, I’ve recently become pretty disillusioned with Nour El Nil themselves. I went to the doctor to be checked for schistosomiasis/bilharzia after a colleague commented that after five years living in Cairo she never went in the Nile. Turns out she was right. The Nile isn’t safe to swim in…unless you’re into parasitic worms. Thanks, Nour El Nil.

Leave a Reply to Monica aka Mom Cancel reply