Can you believe how behind in these posts I’m getting? Ok, I probably didn’t need to write five posts about Egypt (and I haven’t even gotten to the part about the pyramids yet!). And yes, life has certainly gotten in the way of my writing lately (not that I’m complaining about our weekend in Joburg!). But really, I need to to get all of these holiday posts up before we head to Ireland next month!

We arrived in Amman on Christmas Eve and ate a fabulous dinner at Sufra – I cannot begin to describe how much our situation had improved from last year’s Christmas Eve debacle. We tried to walk through the city that evening, knowing we had limited time there, but the rain drove us off the sidewalks and into a taxi.

After a gloriously relaxing night at the Amman Rotana (did I mention their spa-worthy bathtub?), we were up for breakfast at Shams El Balad, with plans to go visit the Citadel right after.

Only…it just wouldn’t stop raining! So, we took our time at Shams – the best breakfast I can remember having in recent memory – and then made our way back to the hotel.

We had contacted our hotel in Petra – the Movënpick Resort across the street – and hired an independent taxi to drive us. We took the significantly less lauded Desert Highway because it saved us an hour and a half, as well as 80 Jordanian Dinars ($112 USD!). Plus, we knew we’d be taking the King’s Highway up to the Dead Sea a few days later.

I’ve taken trains in Europe, buses in Africa, and a little bit of everything in Asia. But taxis in Jordan are like nothing I’ve ever encountered. In Amman, they were easy – metered and cheap, just the way taxis should be. But out on the open road…my God. Our driver provided a wifi connection in the taxi, but I was so carsick I couldn’t even look at my phone. From the speeds to the weaving, it is not something I’m interested in ever experiencing again!

Luckily, we arrived in Petra in one piece and our driver helped us pick up our Petra By Night tickets. We were meeting friends from Amsterdam for Christmas that night and we’d be spending our time looking up at the Treasury by the light of hundreds of candles.

Our friends had just gotten back from a couple of nights camping in the desert and were looking forward to a much needed shower and nap, so Chandler and I wandered across the street to the visitor’s center at Petra.

There, they explained that in addition to our 17 JD Petra By Night tickets ($24 USD each), we would also need to show our day passes – which we hadn’t yet purchased. The ticket seller was away at dinner, but we were assured we could come back at 7:00 pm to buy the additional tickets we needed.

But cost isn’t an issue on Christmas. Right?

We had already decided to eat at the hotel – the city of Wadi Musa, which surrounds Petra, is not exactly known for its culinary skills. The four of us started with a drink at the bar (Jordan is not an easy place to find alcohol!) and then made our way to the buffet.

Normally not ones for buffets (seriously, I can never eat enough to justify their cost!), it was that or a veggie lasagne at the restaurant – and that just didn’t feel festive enough. So we stuffed our faces with cheeses and lentil soup and Chinese food and salads and an assortment of sweet treats/fruits! At 25 JD each ($35 USD) we had begun racking up a hefty bill.

But soon, all the money we spent would be forgotten. Not immediately, mind you, but soon. (And, perhaps it’s worth mentioning that, after all that, no one asked to see our Petra day passes, only our Petra By Night tickets).

Soon we were walking down a candlelight path, with thousands of stars in the sky. We came to the Siq, 1.2 km of narrow gorge that winds its way to Petra’s most famous ruin, Al Khazneh, or the Treasury. Even with the candles, it was nearly impossible to see, but there was a hush as hundreds of us walked together on what felt like a Christmas pilgrimage.

On a whole, we weren’t a hurried group, with only a few handfuls of people rushing past, always interested in being “the first,” even though, clearly, others had come before to set up the spectacle. The rest of us enjoyed the walk and the anticipation of what was to come. 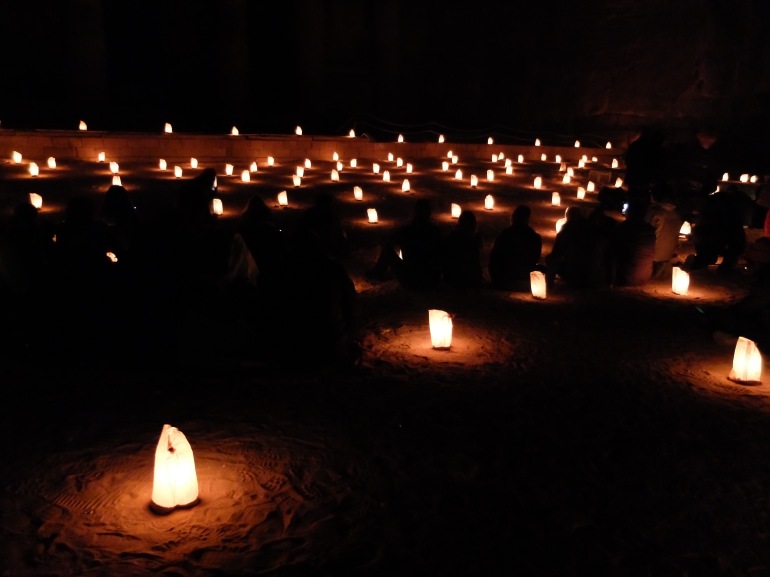 We arrived to a sea of candles and carefully found our way to a stone shelf that ran along the left side. We tried to photograph the Treasury in the impossible darkness as more and more people filed in.

There is no limit to the number of people who can attend any Petra By Night event, and so on Christmas, we were pretty packed in. Eventually, people had to be sat between the candles on the sand.

Servers came around offering complimentary Bedouin tea to help warm us up, as a group of men began to perform traditional music. The stillness of that space, despite the hundreds who had arrived, was mesmerising. After hearing some of the history of Petra, we were all directed to turn on our flash and simultaneously take a photo the Treasury, using each other’s devices to light the temple.

The beauty of the space was hard to capture and eventually I gave up on my photos and just sat back to enjoy it myself.

All too quickly, the evening came to an end, but not before I snapped this great photo of Angela holding one of the paper lanterns.

We left during the lights and sounds display that cast the temple in odd, yet festive hues. The mood had shifted from calm and serene to almost frenzied and we were ready to end our night with celebratory drinks at the Cave Bar – the oldest bar in the world – located near the start of the trail. 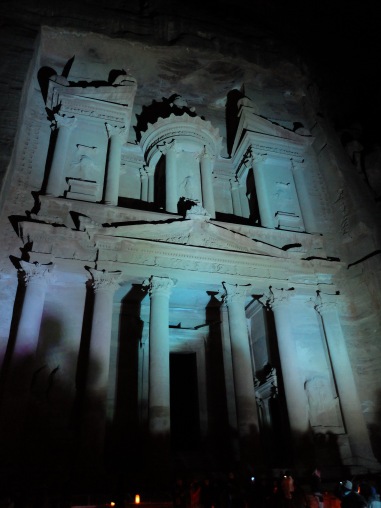 The spell broken, many decided to use their phones to light their way on the path back. We tried to speed up or slow down to spend more time with the stars and the lanterns and the magic that is Petra By Night. 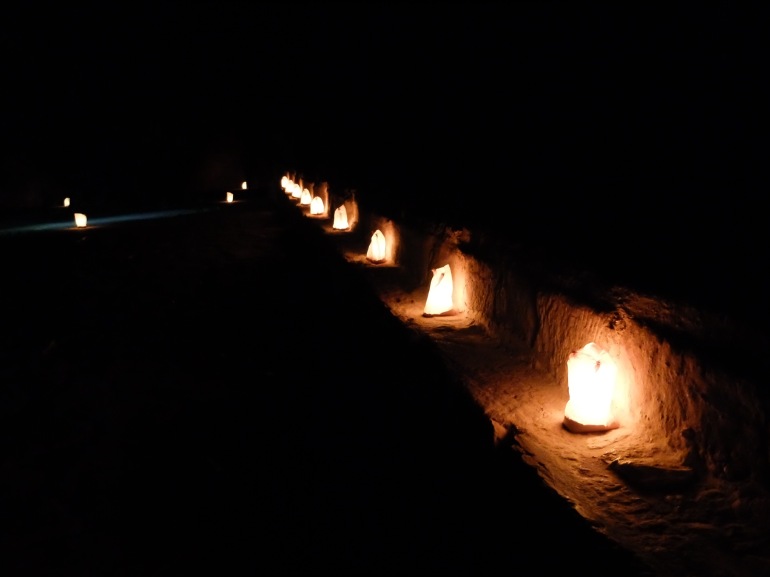