It wasn’t so much the other people, because honestly, I thought the pyramids would be more crowded. It was the overall ambience. It lacked.

It was actually pretty bizarre.

The Great Pyramid of Giza is the only remaining monument from the original Seven Wonders of the World. Built 4,500 years ago, it was the tallest man-made structure in the world until the Lincoln Cathedral Spire was built 3,800 years later.

It was commissioned by Pharaoh Khufu. The Sphinx belongs to his son, Pharaoh Khafre’s second pyramid. And the third pyramid followed shortly after for Pharaoh Menkaure.

Scholars still disagree on how the pyramids were built, even though I definitely teach my students about incline planes by using the pyramids as an example.

What I’m trying to say, is that these are incredibly complex and interesting structures. And they’ve been turned into some lame theme park without the rides. A giant boat museum has been built to the side of the first pyramid and they paved a road running between, instead of around, them. There are dig sites all around, merely roped off. No thought appears to have been given for atmosphere or conditions surrounding the pyramids themselves.

And so, while I tried to revel in the impressive size and mystery of these structures, I found myself increasingly distracted by everything that was happening around me.

We had hired a guide for the morning, using Emo Tours because we’d had such success with them in Luxor. And while our guide, Ali, was very nice, it soon became clear that he had a tried and true plan that he used to make each of his customers happy.

We normally prefer to explore on our own, but we had been warned by friends (and fellow bloggers) that going to the pyramids solo was simply inviting harassment. And honestly, I can’t attest to the trueness of that statement, because while we were left alone by others, we still had our own guide to deal with.

We were dropped off a short walk from the first pyramid, and instead of getting to stand back and enjoy the splendor, Ali hurried us to the base of the pyramid so that we could walk along and get our photos taken before the crowds arrived. When I decided to keep hold of my camera, instead of giving it to one of the camel owners, our guide left us alone to explore and join him when we were ready. 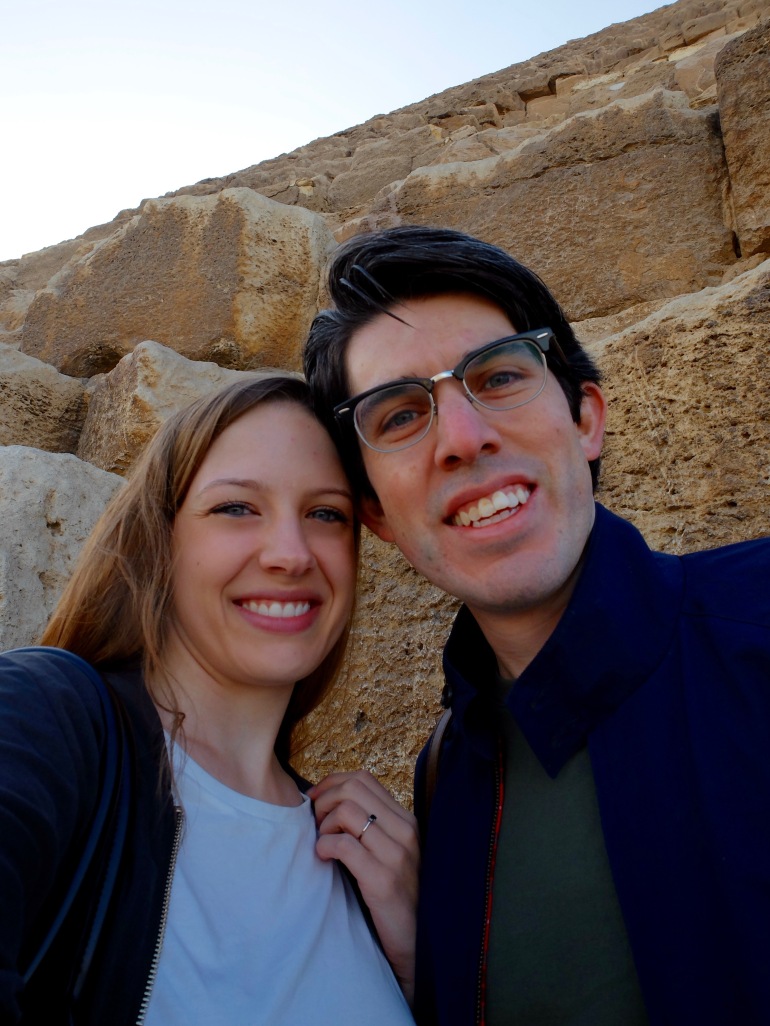 But because being right up next to the pyramids wasn’t quite the view we were looking for, we soon continued our walk. Our guide’s next plan was to sit me on a camel and have me pinch my fingers in the air to get some kind of oddly staged photograph. I declined and Ali offered to take us to the car so we could drive to the next pyramid.

But I had other plans.

Instead, he and Chandler struck up a conversation (more about modern Cairo than about the pyramids he was showing us), while I started walking.

I hadn’t come to see a tour guide’s interpretation of the pyramids – I had come with a guide in the hopes that he would help me see what I was interested in. A complete view of all four sides of each pyramid. 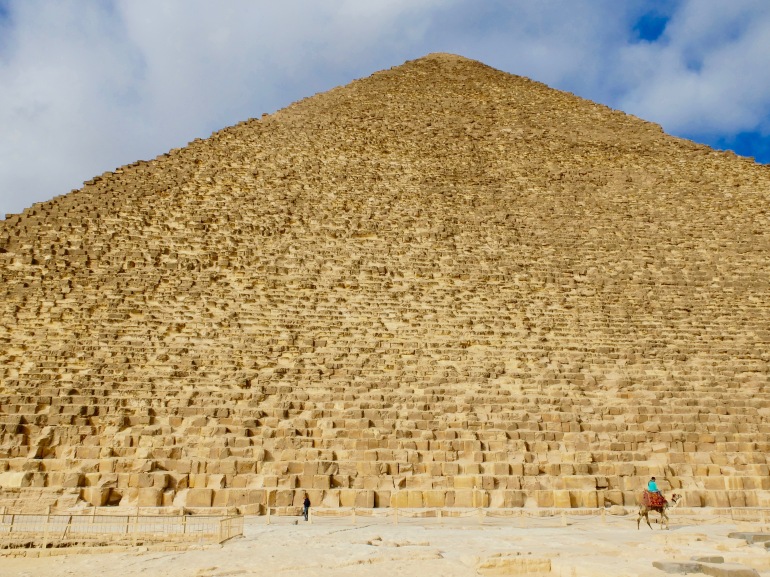 I made my way around the first and began my walk to the second. It was at this point that Ali, very concerned, tried to stop me and take us back to the car. The reason? In his 19 years as a tour guide in Egypt, no one had ever tried to walk with him from the first pyramid to the second.

I honestly couldn’t believe this. I had read blogs of this, I had seen photos, and then it dawned on me. People who like to explore sites like the pyramids on foot, don’t hire tour guides. What had been so helpful in Luxor (five sites in one day without a car would have been impossible otherwise!), was wildly unnecessary for us, here at the pyramids, where everything we were interested in was in plain sight.

I explained my plan to Ali, and while surprised, he ended up being game. He called the car to meet us at the final pyramid and moaned about wishing he had worn a different outfit. We were off to pyramid number two. 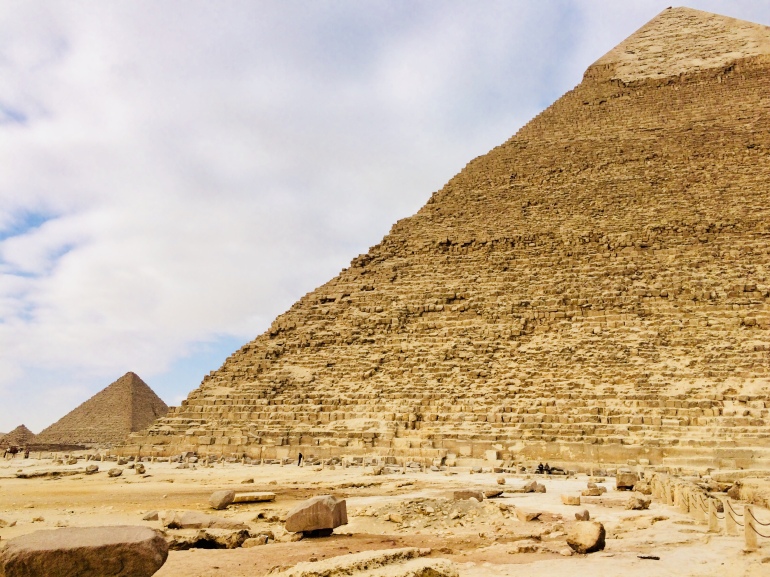 Now with all the fuss Ali put up, you might think we hard a long or arduous trek ahead of us. But, in reality, it was just over one-quarter of a mile between pyramids one and two. And the sky was overcast – meaning I never had to take off my light jacket.

I made my way around this pyramid solo, Chandler and Ali feeling like they could see enough from the side we walked toward and the side we would walk away from. I have to admit, my idea to walk around the pyramids came from reading a fellow travel blogger. She had done the same thing and had been in awe of the subtle changes the pyramids went through on each side. And I have to agree, they weren’t identical. Nor were they particularly startling in their differences. 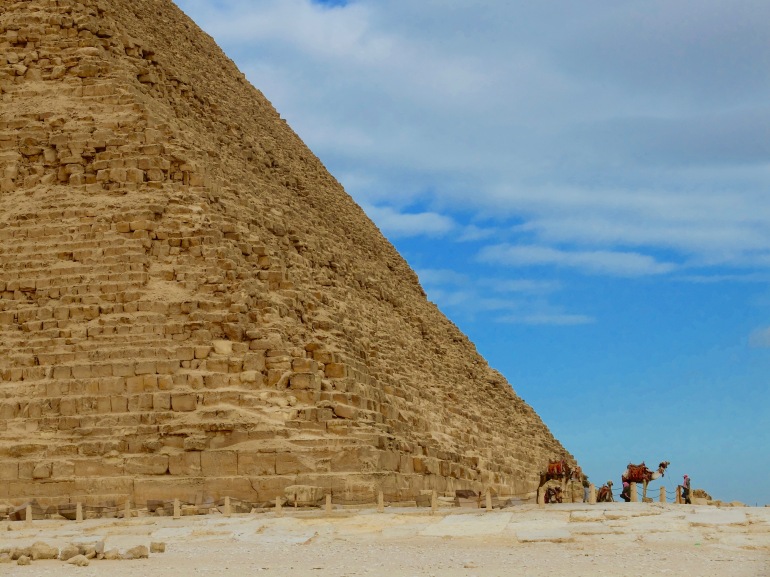 But, this would probably be my one trip to the pyramids of Giza, and so why wouldn’t I spend more than five minutes at each site?

After going around the second pyramid, we made our way to pyramid number three, another quarter mile away:

The smallest of the three pyramids built for pharaohs (there are also six even smaller pyramids, built for the queens) and I still wanted my walk about. This time, however, halfway around, Ali shouted at me to stop. He said tourists weren’t allowed past there, only those with camels.

At least without a guide, I could have feigned ignorance. But, I was happy someone had been around to keep Chandler company while I wandered, and I realized I couldn’t really blame Ali for trying to do with us what had made all of his previous customers happy.

At this point, the driver pulled up and drove us to the lookout spot. Packed with tourists, it has some lovely views of the pyramids, with the city of Cairo in the background.

To the right are three of the queens’ pyramids in a line.

It was at this point that I think Chandler was glad we had a guide. Had it just been the two of us, I absolutely would have marched us into the desert for different views and perspectives of the pyramids. Chandler found that totally unnecessary and I figured I’d been given enough free reign for one day.

We hopped back in the car for our final stop: the Sphinx. For whatever reason, the body was made from much softer rock than what was used for the head, meaning much of what is found below the neck has been restored. 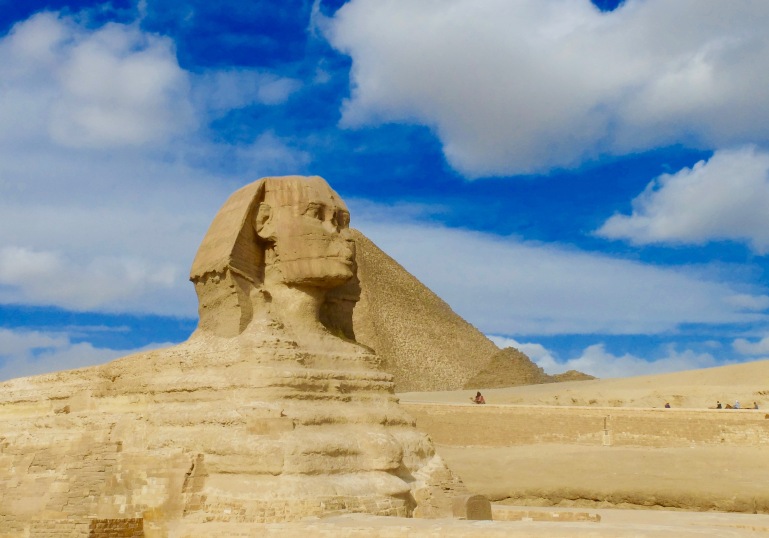 This was the most “Disneyfied” stop of the day. You have to line up to get a glimpse with an unobstructed view and once you’ve taken your photograph, you’re shuffled forward, around, and out past dozens of stalls selling all kinds of cheap trinkets.

It’s been odd to reflect on our day (morning, really) at the pyramids. On the one hand, they are incredible monuments that attest to skills and techniques from 4,500 years ago. On the other hand, the Egyptian government runs them like a historical theme park.

I wish there could be more reverence to the area, more beauty. I thought about our time in Siem Reap, visiting Angkor Wat and the other temples and how much more peaceful that trip was. Maybe that’s the difference between a forest and a desert.

Either way, I’m glad we went. I can’t imagine saying that the pyramids weren’t worth seeing. I just think they could be seen better.