The same day we booked our tour guide for the pyramids, we also booked a “day tour to Islamic and Christian Cairo” through Emo Tours.

After our experience at the pyramids, I briefly entertained the idea of cancelling this second tour. But I didn’t know if we’d get our money back and Ali really was a nice person. Plus…I had visions of how convenient it was to have a car and driver when traveling to different sites in Luxor.

When we chose Egypt as a destination for our holiday break, we knew we’d go on a Nile cruise and we knew we’d see the pyramids. Nothing else was certain. We decided to spend our final week in Cairo because we figured by week three we’d be tired of unpacking and repacking our suitcases (plus, we thought maybe we’d hop up to Alexandria and spend a few days at the beach – forgetting it would be January).

So now we had five days in Cairo and the pyramids only take half a day. We browsed around for some other activities and became intrigued by a tour through the religious sites in Cairo.

Coptic churches, a synagogue, and mosques, followed by a trip to the Khan Khalili Bazaar. It seemed like an interesting way to spend a day.

Our tour began in Old Cairo and our first stop was St. Barbara, the hanging church. 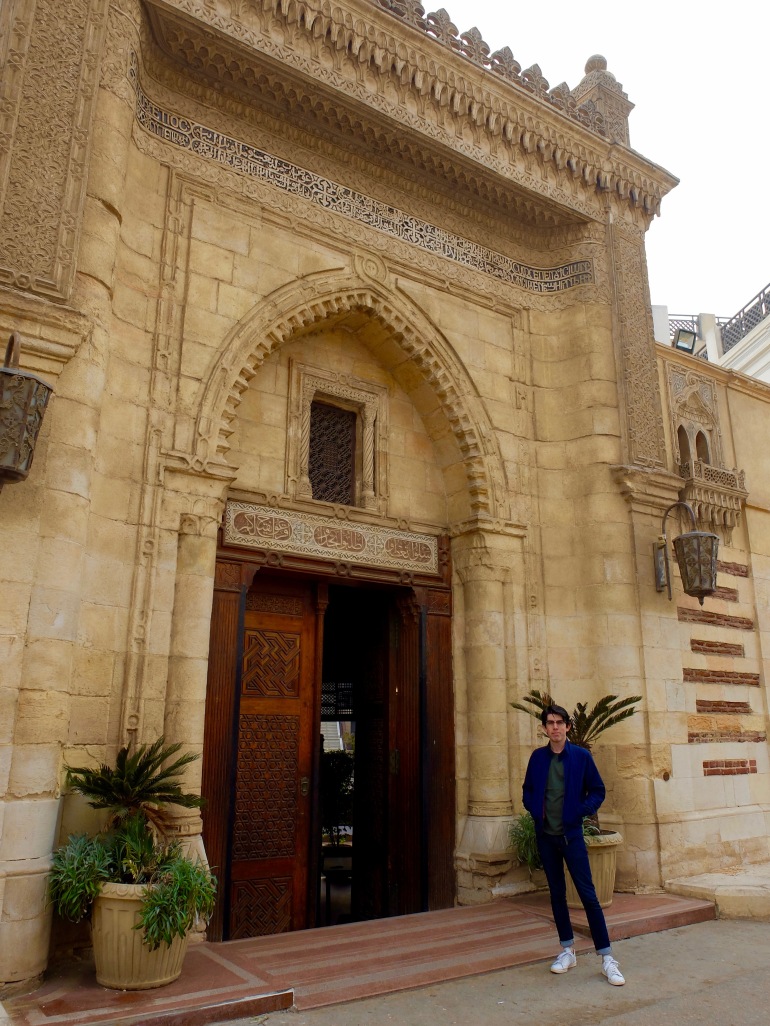 It was built above a Persian fortress and inside it has the same dimensions as Noah’s Ark. It was hard to picture two of every kind of animal inside. The structure was beautifully made of cedar wood. Abraham is rumored to have been buried under the marble pulpit.

Inside the front doors, but before the church itself, is a quaint garden filled with mosaics. Brightly colored and in all shapes and sizes, it was a pleasant place to pass the time. 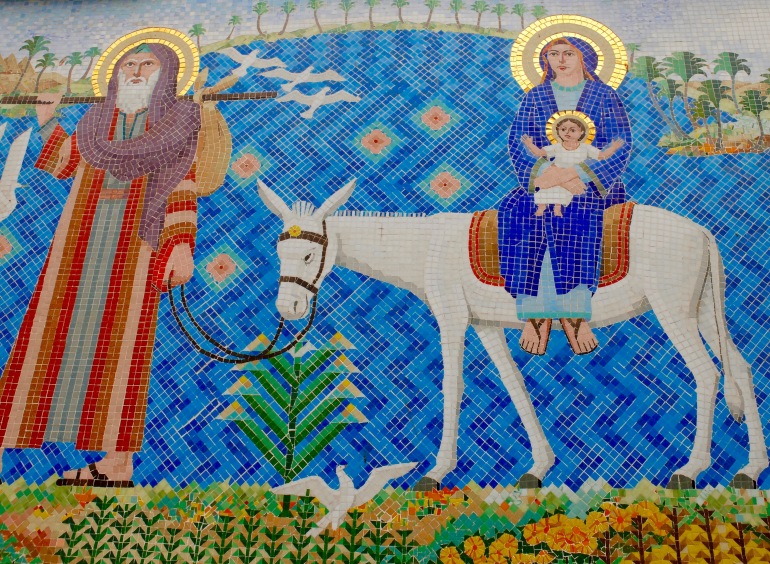 Our next church was St. Mary’s Church. Considered “modern” for having been built in 1,600 (St. Barbara dates back to the 5th or 6th century AD), it was impressive from the outside and dazzling from the inside: complete with an imposing chandelier. 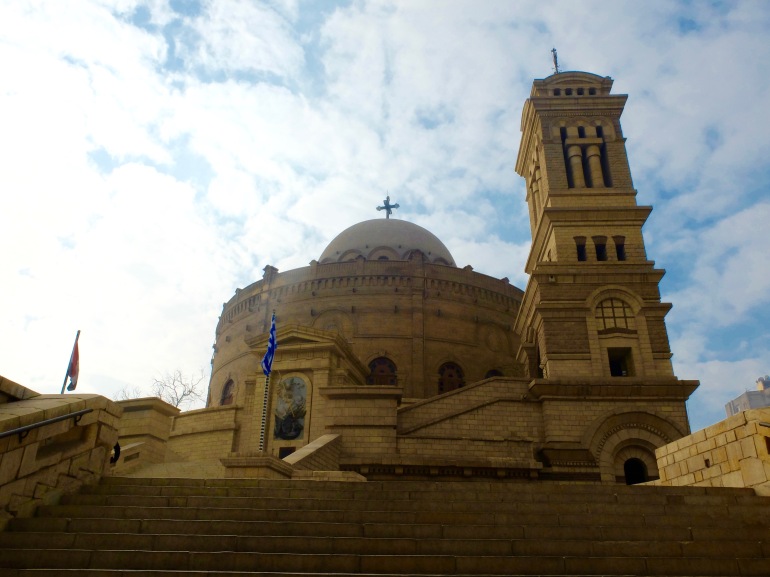 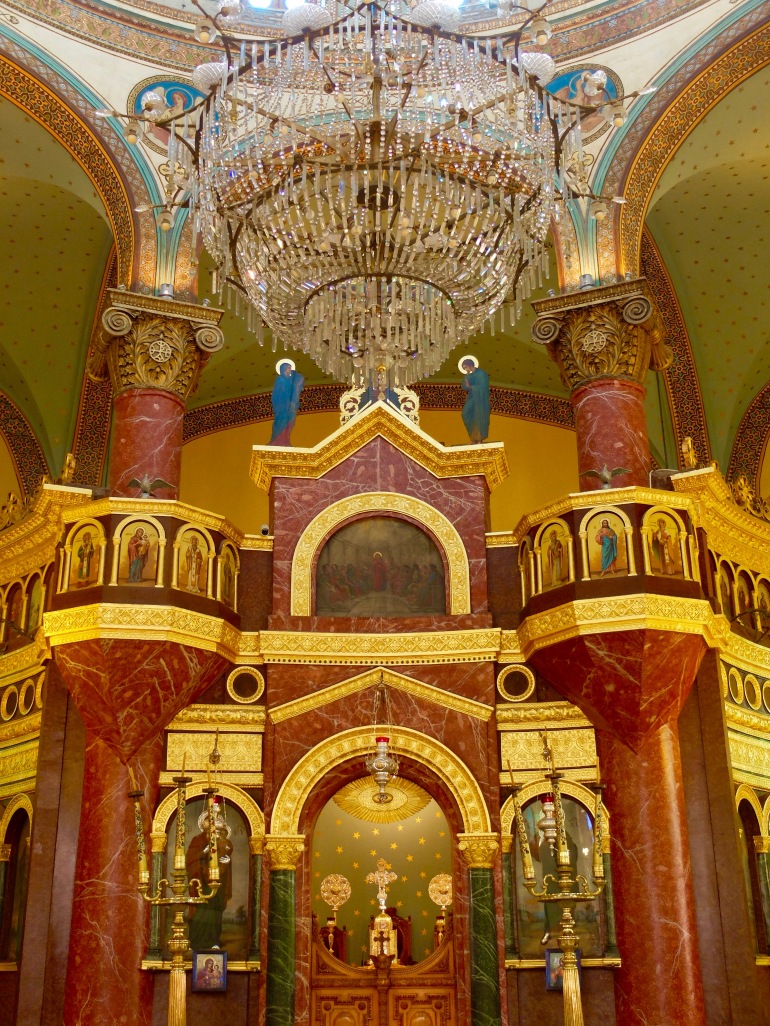 We had a quick stroll through a cemetery to a 2,000 year-old well that Jesus reportedly drank from with his family. Another “modern” church had been built around it.

We followed the path to Abu Serga, the Crypt of Jesus: A cavern where he lived with his family for three months of his childhood. Throughout the walk I kept thinking back to our time in Ethiopia and their claim that the Ark of the Covenant resides in Axum (though no one is allowed to see it).

Our last stop in the neighborhood was the Ben Ezra Synagogue, formerly a church and no longer used for a functioning congregation. Its tourist attraction is the claim that it is located on the site where baby Moses was found.

Throughout the morning, we were pleasantly surprised by our guide, Ali. A practicing Muslim, he seemed to know much more about Coptic Cairo than he did about the pyramids of Giza. He was a wealth of fun facts.

After that, we were off to the Saladin Citadel. Built on a “mountain,” really more of a hill, it offers impressive views of the city below. With 17 towers and 6 gates, it is a fortress to be reckoned with.

Inside are three main mosques: First, the Sulayman Pasha Mosque, which we seem to have missed. Instead, we went to the Al-Nasir Muhammad Mosque. Considered the “plain” mosque, I actually found the interior much more appealing than the gaudiness of the third and most famous mosque. 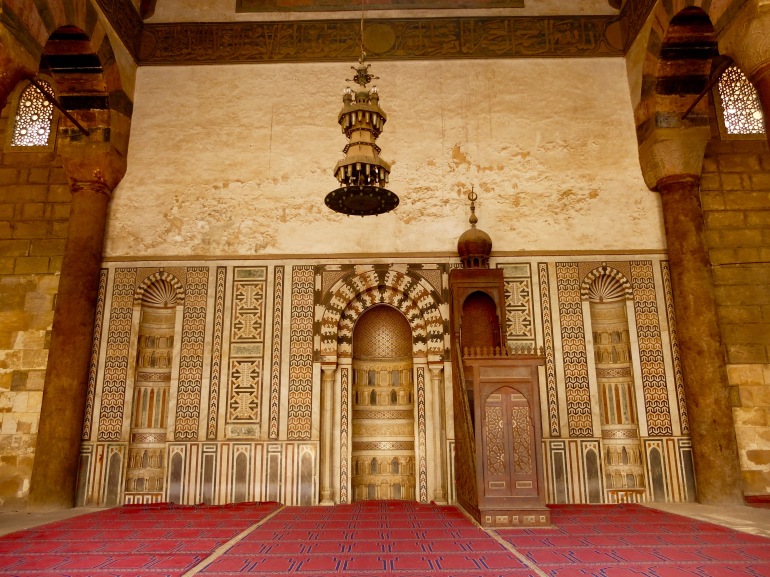 Third was the Mosque of Muhammad Ali, also known as the Alabaster Mosque. And while it claims to have the oldest and largest pulpit in Egypt, it was the courtyard and 64 windows that I found myself most attracted to. 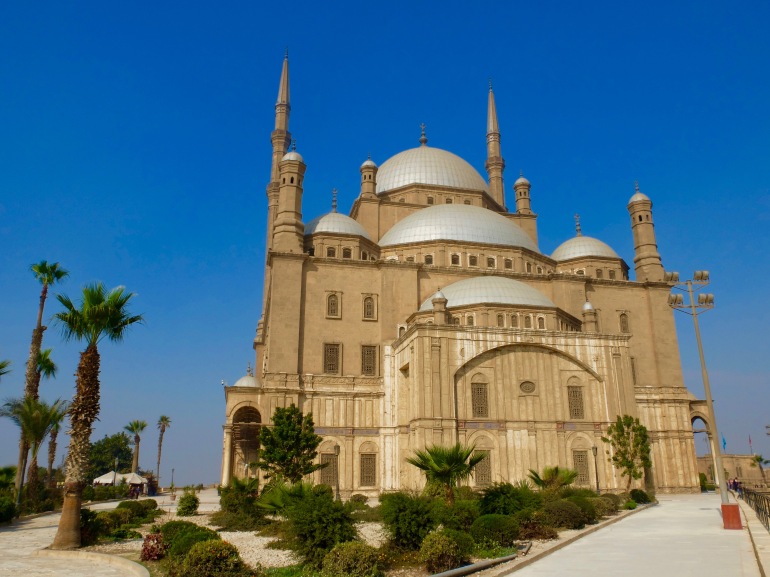 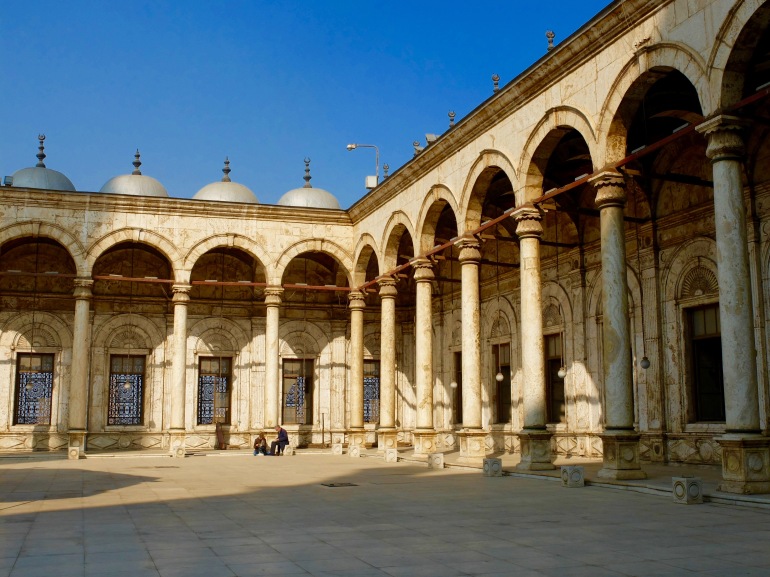 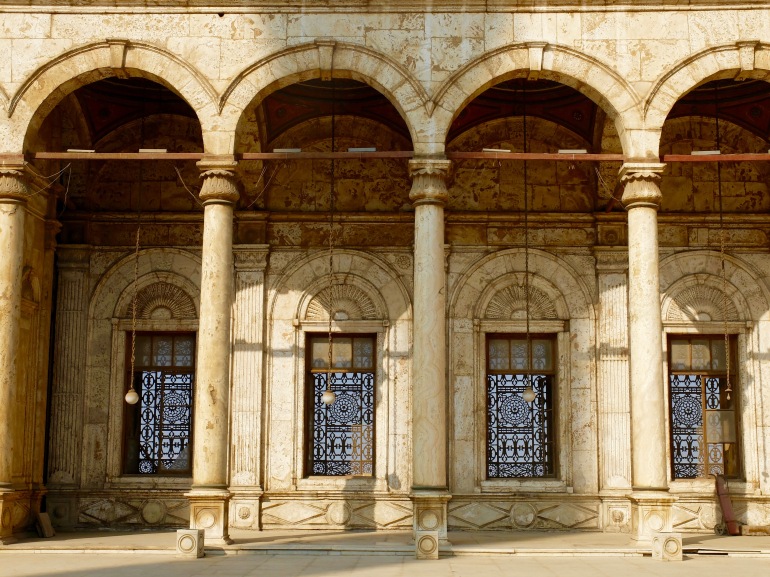 But it was at the end of our visit to the Citadel that our tour began to go downhill. Though we wouldn’t know it at the time, when Ali took advantage of the gorgeous views to point out the El Sultan Hassan Mosque and the Al-Rifa’i Mosque, that was the closest we’d get to them. 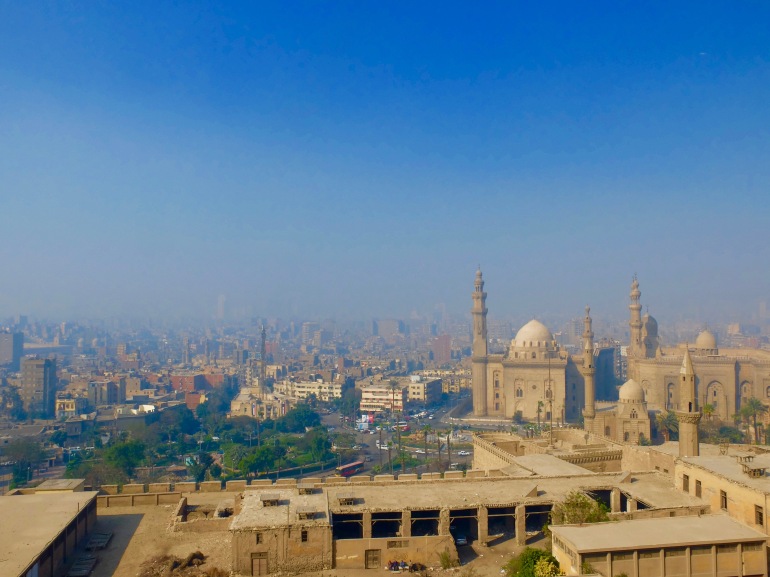 Instead, we made our way to Islamic Cairo, founded in 641 AD. Walking through the streets (at a fairly fast clip), Ali pointed out the mosques that we couldn’t go inside – we had arrived during a time of prayer. Understandable, but then he didn’t even bother to stop and talk about the significance of the mosques from the outside.

Perhaps he assumed two Christians wouldn’t have as much interest in the history of the mosques. A disappointing assumption, given I know plenty about my own religion’s history and therefore am more interested in learning about others’. 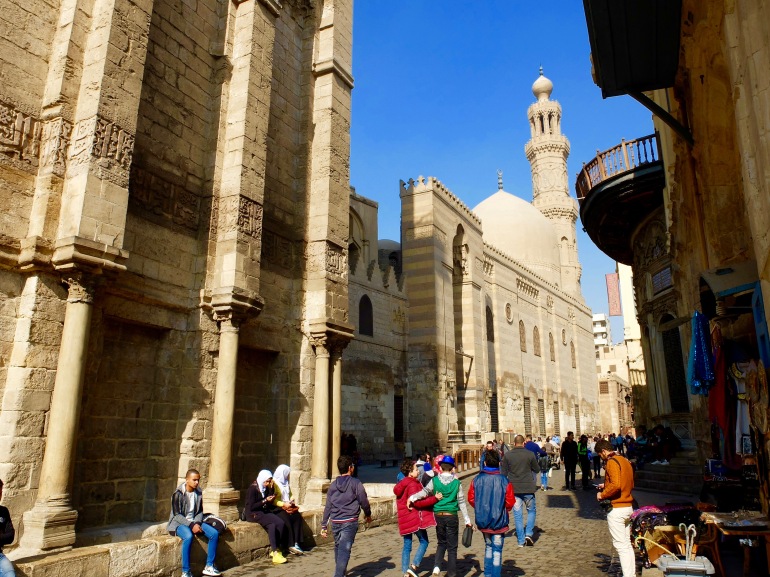 Before we knew it, we had made our way through the mosques and were now in the Khan Khalili Bazaar. It was nearing 2:00 pm and I was getting ravenous, so after dragging Ali to a souk (snacks were included in the price of the tour), I was ready to shop.

In the end, I bought one thing…a volcanic pumice stone. Chandler bought two…Egyptian spices. Everything else was a copy of things we had already seen at another point on our trip: rugs (seen in Egypt, Jordan, and Ghana), alabaster stone (purchased in Luxor), cheap trinkets & souvenirs, shisha pipes, bright shirts and pants, etc.

Not much seemed unique. And I would have thought the point of having a guide would be to help you find fair prices, but even after haggling with the shop owners that Ali brought us to, we know we still paid too much.

The walk, however, was nice. And the store owners weren’t nearly as aggressive as we’d been led to believe. 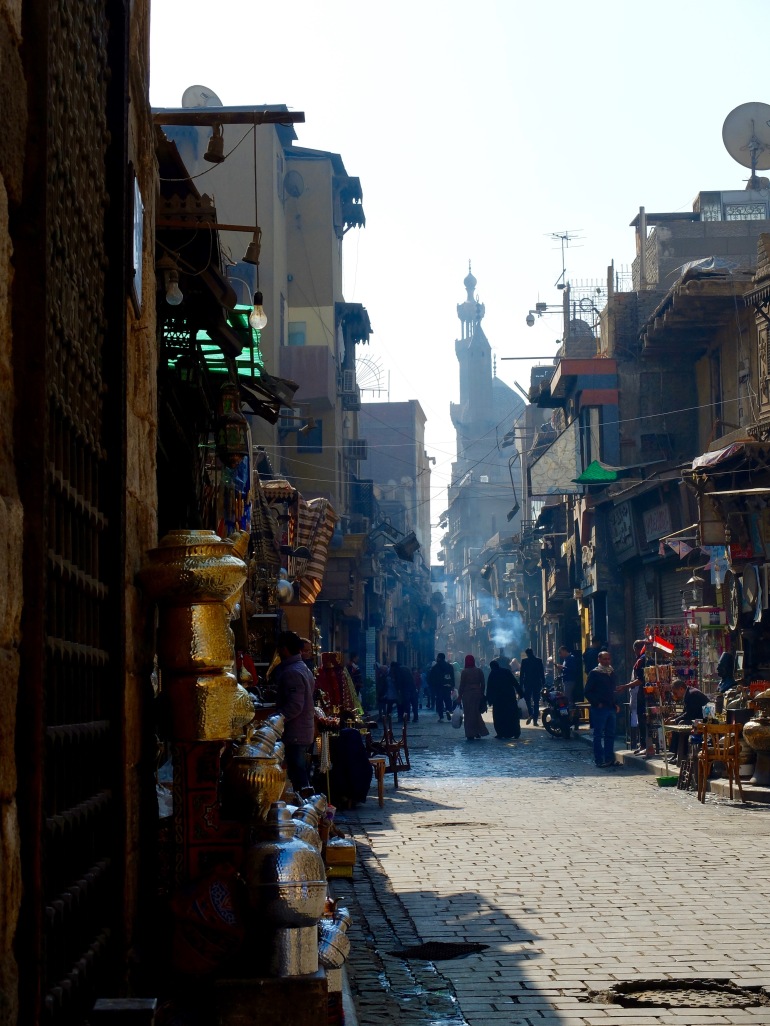 All we had left was lunch. Also included in the tour. Our only request: Not a buffet. And somehow, that’s exactly where we ended up. So instead of filling up on white rice, cold pasta, and iceberg lettuce (it wasn’t even an Egyptian buffet!) we watched Ali eat and I ordered a mango juice (which I had to pay for – only food was included…even if the food wasn’t consumed). And then we said our goodbyes.

Once again starving, we made our way to Sequoia for a truly delicious meal. Knowing it was a 45-minute walk to get there, we couldn’t resist stopping in Nola – a cupcake shop along the way.

Certainly not the day we had planned, but with plenty of bright spots along the way. Our tours, walks, and time spent in the Egyptian museum taught us that Cairo is not the city for us. But I’m glad we learned that before deciding to move there! And we had fun exploring it along the way. 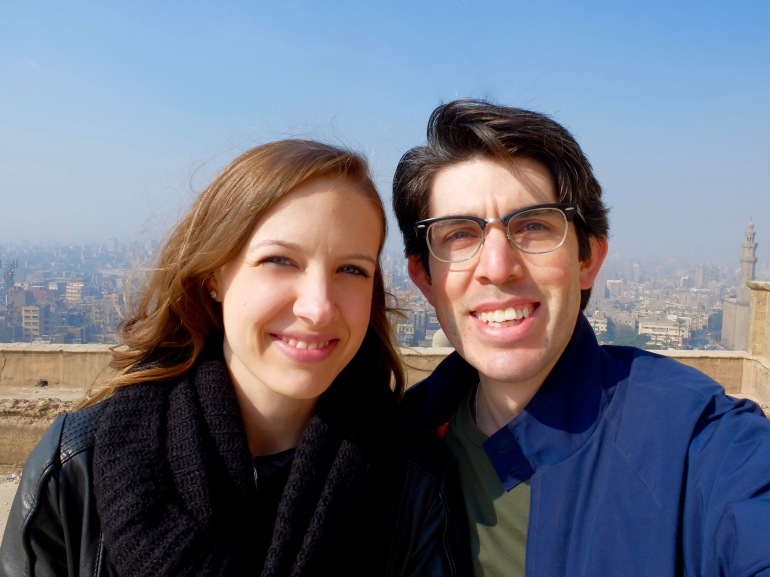