During our time in Bologna we decided to make a day trip to San Marino.

The fifth smallest country in the world and third smallest in Europe, behind Vatican City and Monaco, San Marino’s history dates back to 301 AD when a stonemason named Marinus founded a monastic community on Monte Titano.

Its constitution, a series of six books written in Latin in the late 16th century, are considered to be the earliest written governing documents still in use today. Making San Marino the oldest surviving sovereign state, as well as the oldest constitutional republic.

Most amazing, how San Marino remained independent during Italy’s unification process: The country served as a refuge for those who were persecuted because of their support for unification and because of this, they were allowed to remain a separate nation!

Now, despite all this “separateness,” they use the euro as their currency – even though they’re not a part of the European Union. Which made it really convenient for us to pop on up (literally, Monte Titano is 2,457 feet above sea level) for the day.

Our first leg of the journey required hopping a train in Bologna to get us to the Italian city of Rimini. From there we had to take the one (you read that right, one) bus that travels from Rimini to San Marino twelve times each day.

20 euros later (for two round-trip bus tickets) and we were on our way to San Marino City.

We arrived just after noon, which meant our first stop (because visa aren’t required and you don’t even need to bring your passport to get into the country) was lunch. We ate at La Terrazza. Not only was their fresh, locally-sourced bread incredible, but it also paired nicely with the local white San Marino wine we tried.

The best part, however, was a tie between the absolutely stunning views of the valley below and the homemade tagliatelle (of course!) with stridoli (wild herbs), fossa cheese (matured in underground caves), and seasonal black truffle. If it didn’t take hours to get to and from San Marino, I would have happily eaten there again! 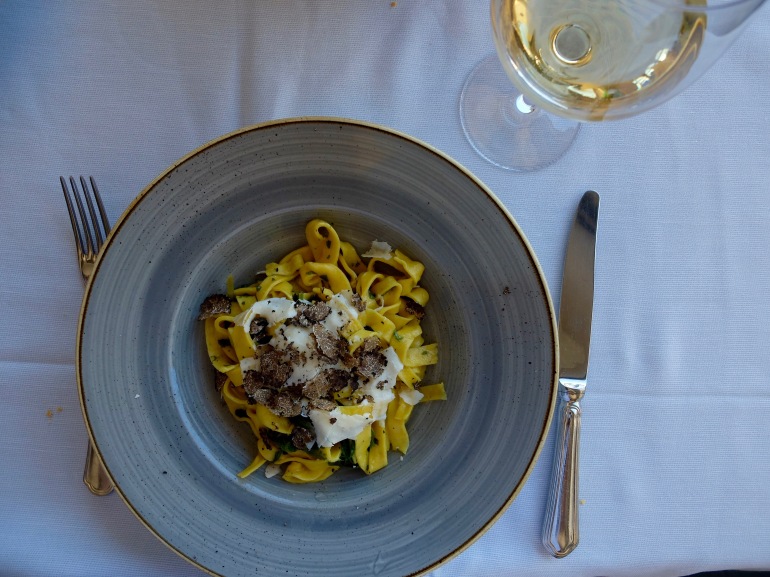 Another bonus of eating at La Terrazza was their gorgeous view of Liberty Square, home to their own Statue of Liberty. We went to the square afterward for a closer look, but honestly, it was nice sitting peacefully and eyeing it up over lunch. 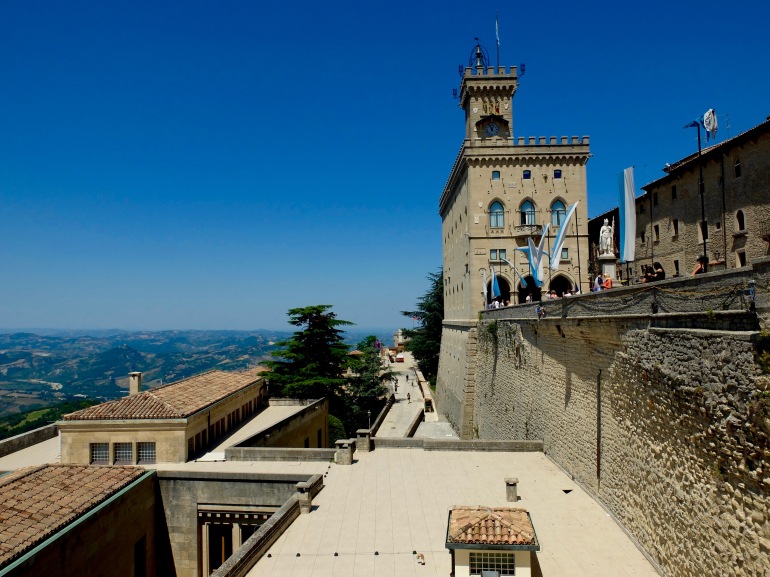 As we walked along, we discovered that the city was putting the finishing touches on their Medieval Days Festival that was literally beginning the next day. Having later looked up the festival online, I can now say that we went on the best possible day. The city was already set up, but we avoided the copious amounts of medieval dress, not to mention huge crowds, that would have begun the following day.

The falconry field was already functioning and the UNESCO-recognized historic center was decorated with old talismans from a bygone age. Everything from bicycles to airplanes to record players were on display.

But the best part of San Marino is something that can be viewed every day of the year: Their towers.

The oldest (and first one you’ll likely encounter) is Guaita Tower. Originally constructed in the 11th century, it has been rebuilt numerous times. The most recent touch-ups occurred during the 15th century while the country was at war. 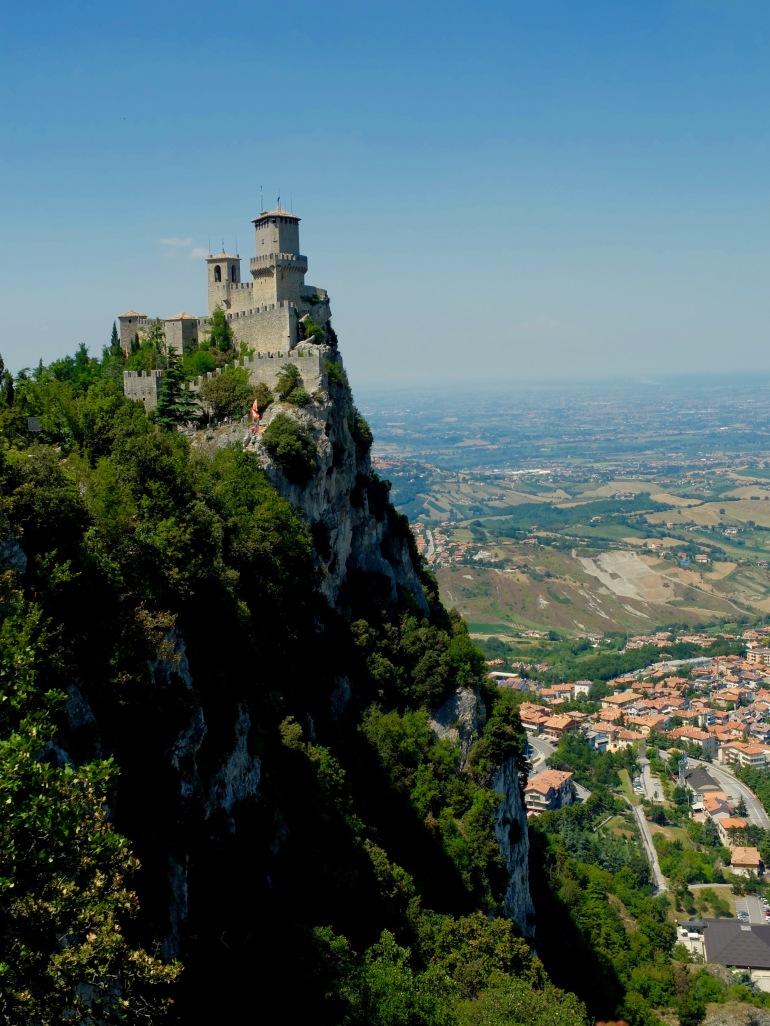 With its elegance, as well as the giant wall surrounding it, this tower was the most fairytale-esque of the three.

You get the best views once you hike past it and are nearly at the second tower. 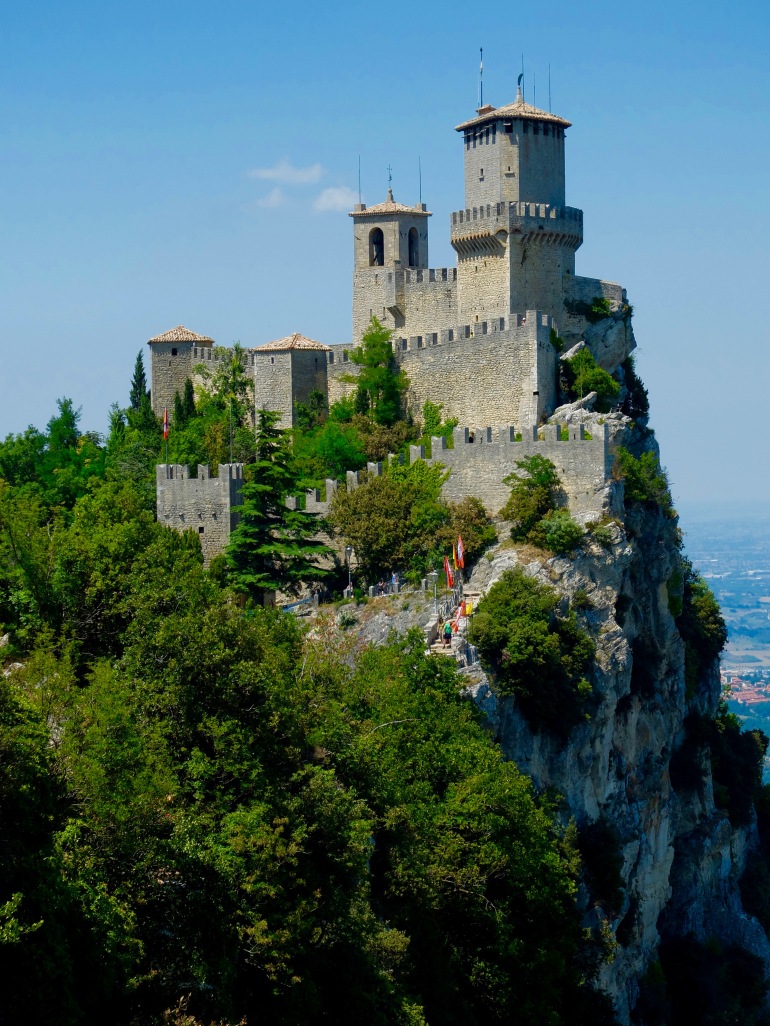 A lovely cobblestone trail connects Guaita Tower with the second tower, Cesta. More remote, this tower houses a museum to honor Saint Marinus. It was constructed in the 13th century on the remains of an old Roman fort.

The third tower, Montale, is the only one not open to the public. It was constructed in the 14th century and was used as a prison. Because of this, the only entrance to the tower is a door 23 feet from ground level.

This tower is furthest from city center, but there is a shaded path you can take for some beautiful views. 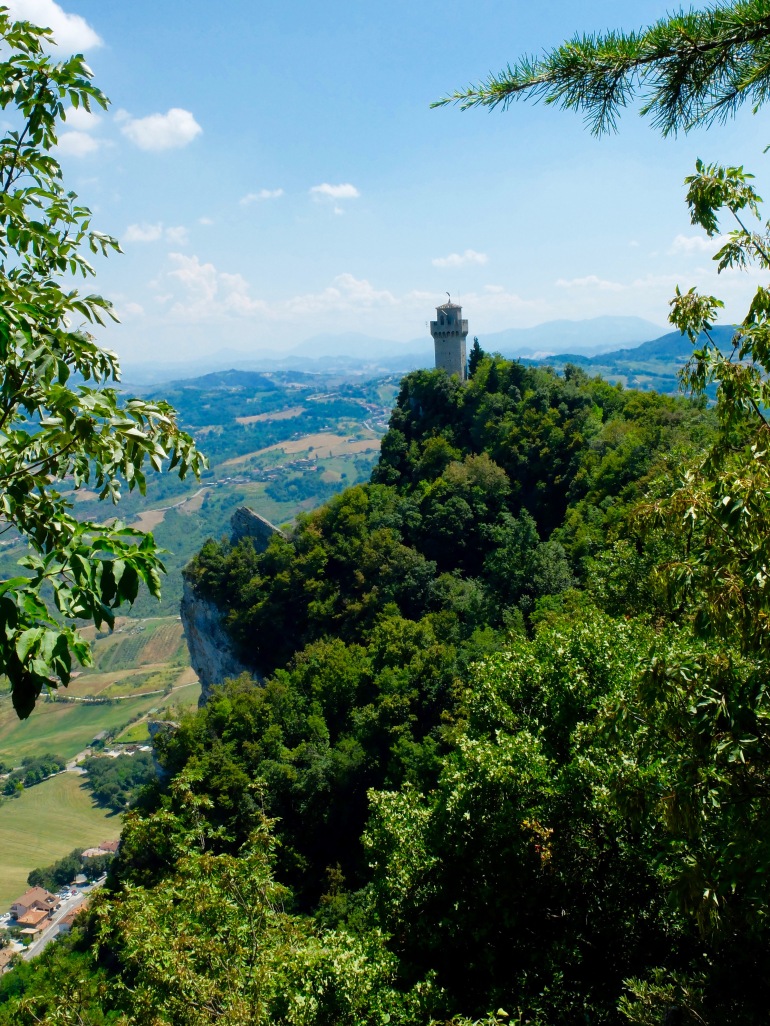 And with that, it was time to leave the country of 33,000 people behind. We made our way to the bus (30 minutes early) to discover it was almost full. We left 20 minutes ahead of schedule and made it to Rimini in time to catch the express train back to Bologna.

It was an odd city, full of tourists and tourists items (mostly faux – I think – guns, perfume, and leather goods), but it was also a fun escape for the day.

I’d never tell anyone they have to go to San Marino, but if you find yourself in the area, it’s fun to say you’ve been to both microstates that exist inside Italy (San Marino & Vatican City). Just like it’s fun to say you celebrated your 24th birthday in Djibouti – or maybe that’s just me?