Yes, it was August. And yes, I should have known better.

But when you’re a teacher, you get certain days off…including days in August. And if these last two summers prove anything, I like to spend the end of my summer vacations in Italy. Next summer we won’t and I’m already devastated.

But this year, the last stop on our summer vacation was Florence. And. It. Was. Hot. We’re talking high 90s and low 100s in a city made for wandering around by foot.

Despite several days of heat warnings, we still managed to spend a good portion of our time outside.

The city isn’t covered with porticos, like Bologna, but the multi-story buildings and narrow streets did provide a decent amount of shade.

Other sites, like the Ponte Vecchio bridge, provide no shade and therefore no relief from the heat. Our Airbnb was on the south side of the Arno River and so we passed by the Ponte Vecchio every time we wandered north into the heart of the city.

Our first night promised to be the coolest (temperature-wise), so we decided to risk the heat and walk up to Piazzale Michelangelo for sunset. We left a little early so that we could explore the Church of San Miniato further up the hill, but we didn’t actually make it before they closed the gates.

I’d have to risk the late morning heat on another day to get a glimpse inside the church and to wander around their famous Holy Gates Cemetery.

We made our way back to the piazzale in time for a charming sunset, shared with a few thousand similarly-minded tourists.

Sometimes the people-watching distracted us from the sunset itself, but that’s ok, because we spent plenty of time up there. Despite the crowds, it was still a pretty relaxed atmosphere.

Also soaking in the sunset with us was a bronze replica of Michelangelo’s David – hence the name of the piazzale.

We crossed paths with the Duomo di Firenze aka the Florence Cathedral dozens of times as we walked around the city.

An absolutely stunning structure, I can say that despite the heat, this cathedral is better seen from the outside than the inside.

On Mondays, many, if not most, attractions and sites in Florence close down. We’re used to museums taking the day off, but in Florence this “day of rest” also includes restaurants and parks.

Luckily, most of the churches remain open. We decided to make this our “Duomo” day. For 18 euros a person, you can get 72-hour access for single-entry visits into each monument.

We started with Giotto’s Bell Tower, because 414 stairs are easier to climb in 80-degree weather than 90+. The tower is divided in five stages, marking natural stopping points along the way. Chandler made it to the first stage before decided he didn’t need to climb two towers in one day – we’d already reserved our visit to Brunelleschi’s Dome for 6:30 pm that night.

I mistakenly thought there was only one more flight of stairs to go. I told Chandler I’d be right back…I wasn’t. This, however, is the view I got for my effort:

There were also gorgeous views of the Dome, but the early morning light meant none of my shots turned out just right. Another minor disappointment was that the top level was completely covered by fencing. Which meant I could take great photos by sticking my camera lens through the wires, but I couldn’t take any photos of myself. Which was for the best, since my personal photographer had stayed four levels below me.

Our next stop was a cool respite inside the Baptistry of San Giovanni. We weren’t inside for very long before it was time to hop in line to visit the Cathedral of Santa Maria del Fiore.

This may seem silly to you, since we’d be getting inside the church at 6:30 to climb up to the Dome. However, that time was after the church itself closed. Meaning we’d have to place to just our small group, but that the Crypt of Santa Reparata would also be closed. This was the only way we could see it.

It took an hour and a half of waiting (luckily in the shade) behind a group of Texans who were incorrectly defining the word synonym and then obnoxiously listing words like two & too, shoe & shoo, new & knew. I can’t tell you how much restrain I showed in not shouting the word HOMOPHONE at them. They were listing homophones. A synonym is just two words or phrases that mean the same thing aka shut & close. As in shut or close your damn mouth.

We finally made it inside and – despite the fact that it is the third largest church in the world – we were disappointingly underwhelmed.

The Dome is lovely, but not significantly different than the Dome inside the Baptistry. And a lot of the rest of the church is plain – no need to overwhelm the senses. The crypt was worse.

We did, however, enjoy our brief stop in the Opera Duomo Museum, our last monument before climbing the Dome later that night.

I will say, the one positive thing about being inside the cathedral earlier that day was that we were better able to appreciate the views inside as we started our ascent of the Dome. It had also been pretty noisy during the day, so the silence that evening gave it an almost magical quality.

This time, Chandler made it all the way to the top. And this was our reward: 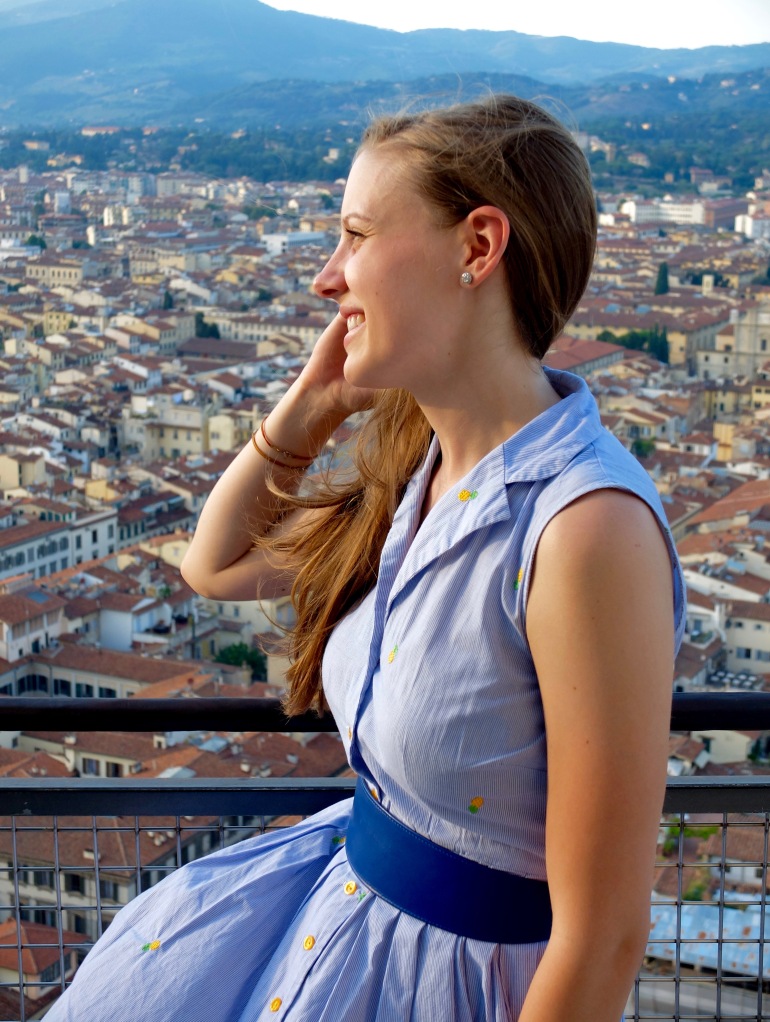 Perhaps not wildly different than my views from that morning, I enjoyed the fresh breeze, being up there with Chandler, and being able to spot the Church of San Miniato, which I still had plans to visit.

The following day would give me that opportunity, as well as some lovely views of the Duomo. But first, we started bright and early and made our way to the Church of Santa Croce. 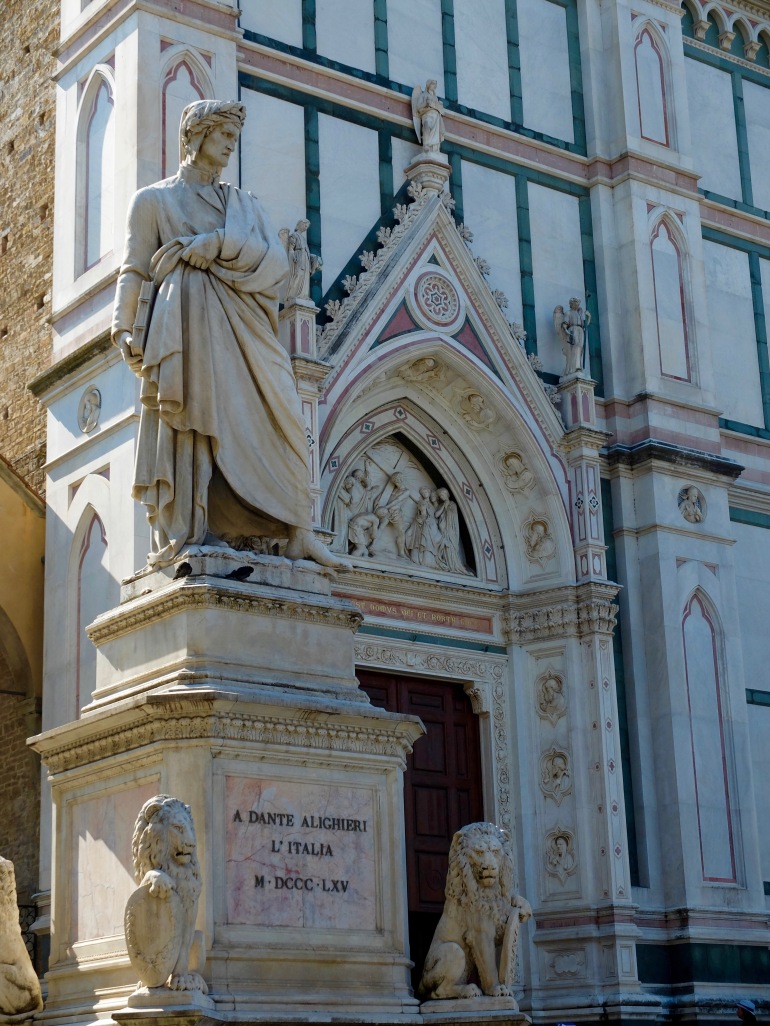 Famous for its statue of Dante Alighieri (ahem, author of the Divine Comedy), it is also home to his honorary tombstone – he had been exiled from Florence (a sentence that was only rescinded in 2008!).

But this church does not contain honorary tombs only. It is also the burial place of Michelangelo, Galileo, and Machiavelli.

However, I didn’t have plans to spend a second day inside of a crypt. Instead, Chandler went back to our Airbnb to have a relaxing morning and I began my second climb up to the Church of San Miniato.

All along the way are gorgeous views of Florence, so, despite the heat, I didn’t mind the hike.

As I walked up, I wondered if I was being silly to go to all this effort to see yet another church. And yet another cemetery. But, it turns out, the Church of San Miniato is my favorite church in Florence.

It’s quaint, but still incredibly intricate and detailed. Later on I read that it is considered one of the most scenic churches in Italy. But I still haven’t been able to learn the significance of the ladder. If you happen to know, please let me know : )

And not only did I fall in love with the church itself, it houses one of the most beautiful cemeteries I’ve ever been to. I nearly missed our lunch reservation, I spent so much time up there! 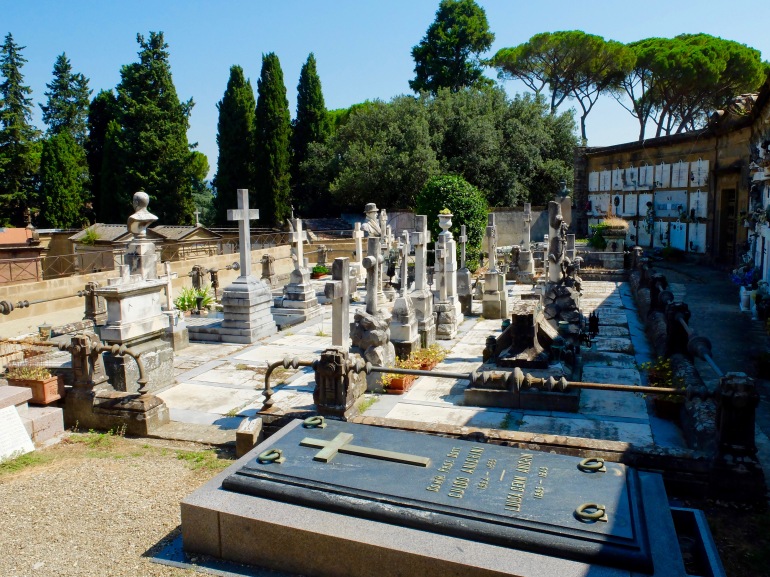 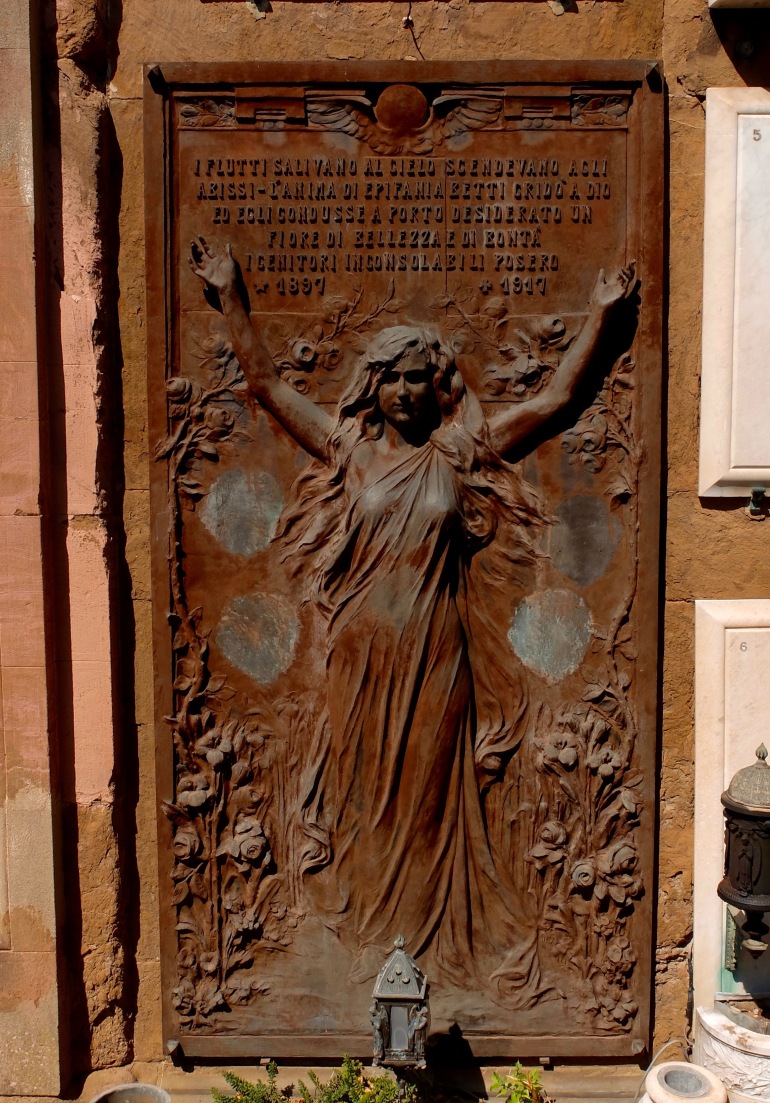 I spent over an hour searching (and enjoying) the grounds for the tomb of Carlo Collodi, author of Pinocchio. This was an important stop for me because Pinocchio was the first (and only!) book I read in Italian. His tomb is labeled Capella Lorenzini – Lorenzini being his family name. It’s nondescript and locked, but was still a fun find.

After all this, you might think we’d be crazy to spend even more time outside in Florence, but we did. The heat drove us inside for nearly every meal, but we did make an exception to get drinks and appetizers at Easy Living – Spiaggia sull’Arno, an urban beach on the Arno River.

I wouldn’t necessarily recommend it for sun bathing, but the drinks were nice. 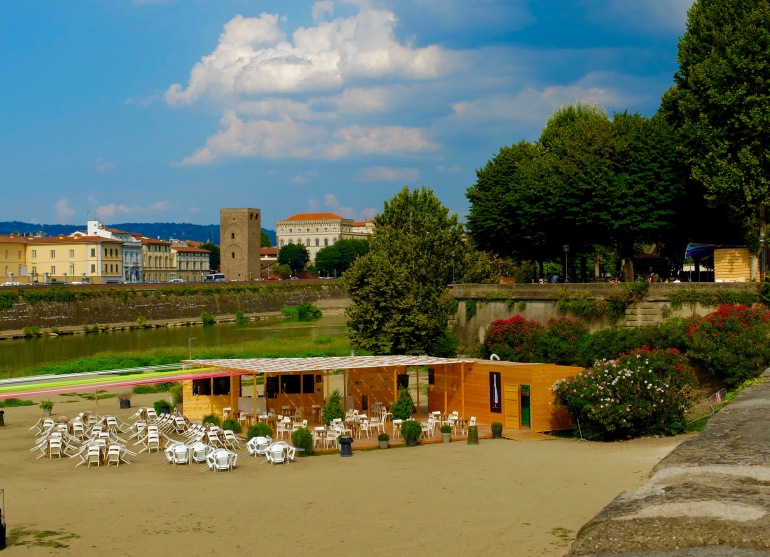 Our final big “outdoor adventure” was a visit to the Boboli Gardens. The previous day I had made the mistake of trying to get into the Bardini Gardens (free entry with the other ticket) in the morning. But we didn’t have our reserved time at the Uffizi until that afternoon. Similar to our Duomo ticket, we had purchased joint tickets to the Uffizi, Palazzo Pitti, and the Boboli Gardens. No ticket, no entry. Proof of purchase be damned.

But that’s ok, because we enjoyed our time at the Boboli Gardens just the same. The gardens themselves are lovely, if a bit brown around the edges in August, but there’s so much to see.

Set behind the Palazzo Pitti, you, of course, get great views of the palace, as well as Florence below. 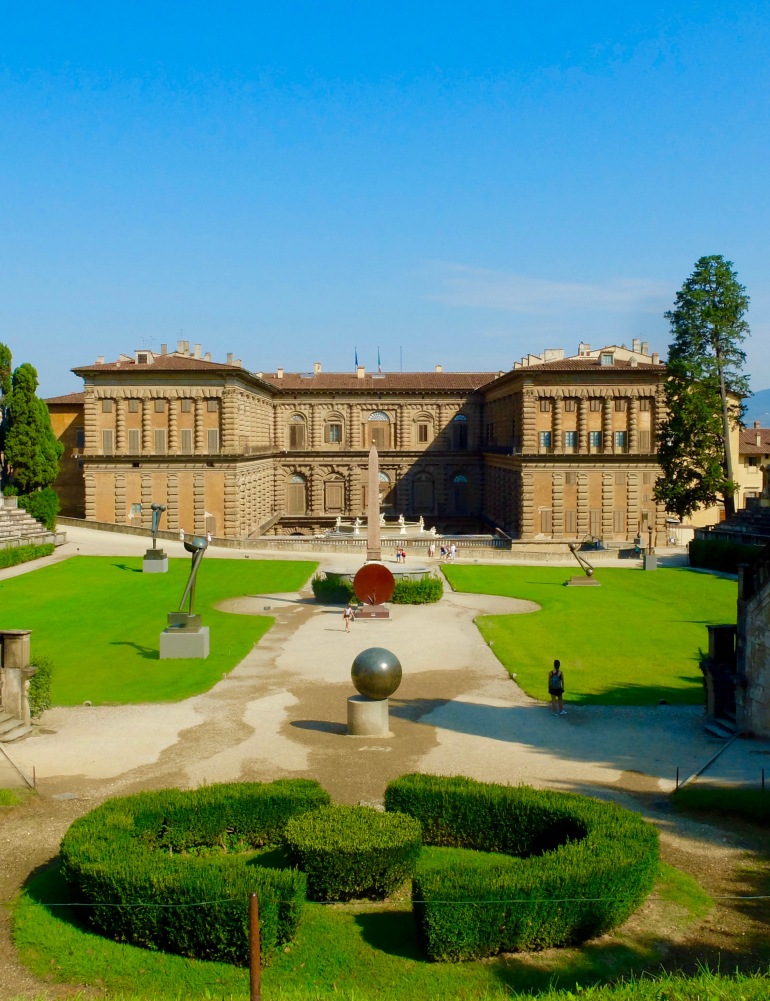 There are also some beautiful works of sculpture, decrepit grottos, unique houses, and an outdoor amphitheater. 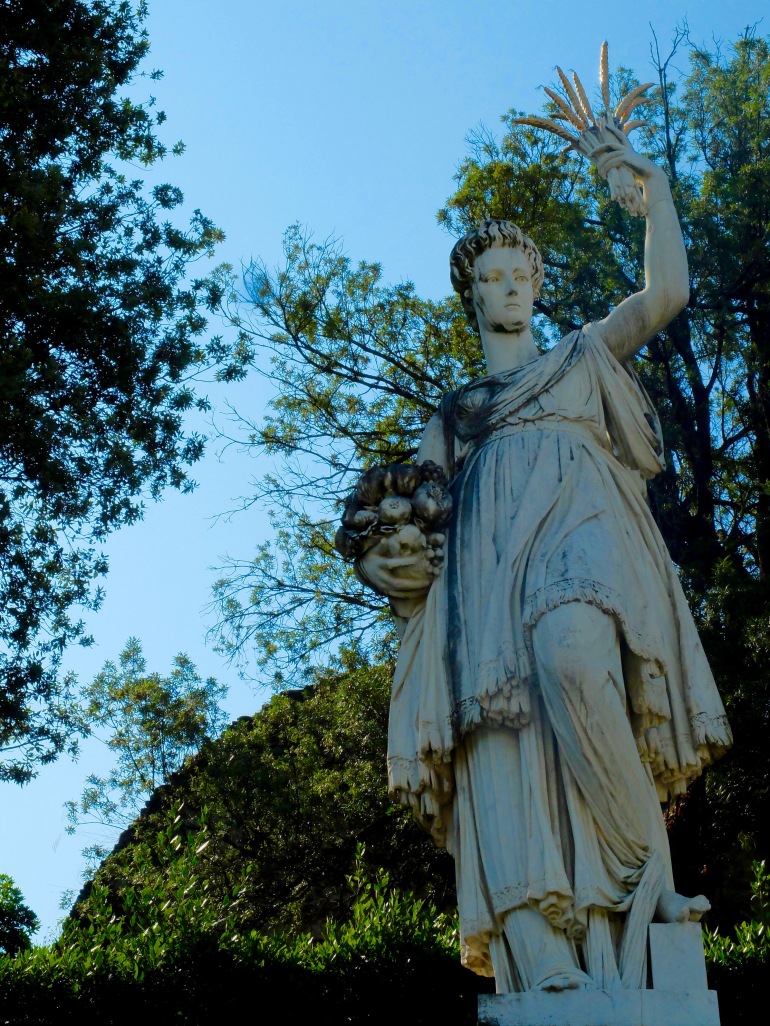 Hot though it continued to be, we enjoyed the gardens.

Also on display was an exhibit of Fritz Koenig sculptures placed throughout the grounds. The juxtaposition of modern and renaissance created a nice balance.

And because no outing in Italy is complete without at least one lion sculpture, it was fitting that this was one of the last things we did in Florence.

Far from my favorite city, I found myself cursing Florence nearly every day. We definitely saw some incredible things, but I’m not sure I’ll ever be able to forgive the city for the heat.

Luckily, there’s more than one museum to occupy your time inside. My next (and final) summer post will focus on the indoor activities we enjoyed in Florence!