When we couldn’t stand the heat anymore, we turned to Florence’s art scene and palaces. Lucky for me, I’m obsessed with statues. They’re not really Chandler’s thing, but even he couldn’t help but be impressed by some of the opulence we saw. I don’t think it’s an exaggeration to say he left Florence with a bit of an obsession with the Medici family.

A difficult aspect of Florence, however, is how pricey the sites are. There was a lot to see and do in San Marino, Bologna, and Cinque Terre that was free or relatively inexpensive – not so in Florence. Before we even arrived we started dropping some serious cash setting up all our reservations. We had booked our Airbnb months ago, but still needed to spend:

Which isn’t to say the sites aren’t amazing and totally worth it – they are. But it’s tougher to swallow the high entry prices when you’re on week 8 of your European summer tour.

My last blog already sang the praises (or lack thereof) of the various Duomo monuments. I still believe that the most impressive sights can be seen standing on the outside & looking up or taking a climb & looking down.

After an unsurprisingly long (this is Italy, after all) wait to get into the Uffizi Gallery – even with our 1:45 pm reservation, we ended up spending a longer than expected time inside.

The building’s interior is a work of art in and of itself. We constantly found ourselves looking up at the ceilings: 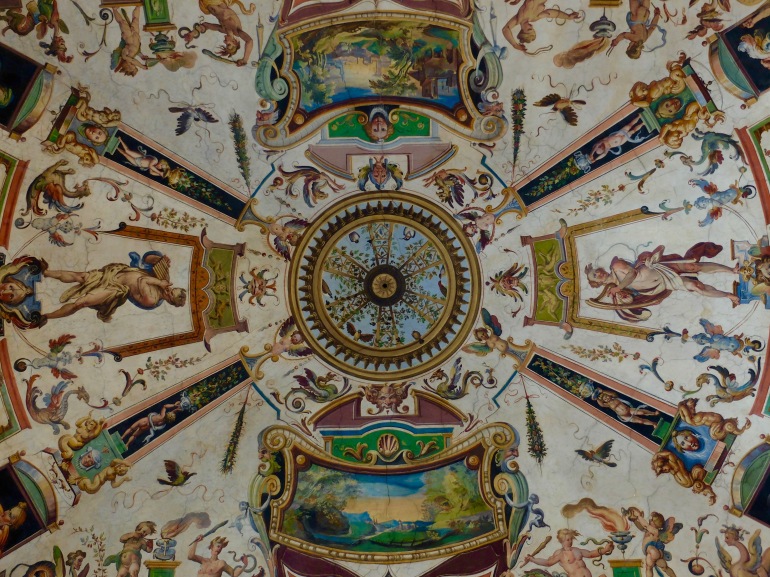 Known for housing some impressive works by artists such as Correggio, Leonardo, Raffaello, Michelangelo and Caravaggio, I was really there to see Botticelli.

It’s impossible to spend time in Italy and not hear about the Birth of Venus. During my art history course in Rome in 2010, so many things were said to have been influenced by that single painting.

And not only that, but the Uffizi is also home to his painting The Spring, another favorite of mine. Look them up if you want to see them in their entirety, but I captured my favorite movements in the paintings:

This was one of those visits when Chandler had to drag me out of the room, I must have started at those paintings for a solid 15 minutes apiece.

As we were leaving, we passed through a rather marvellous exhibit featuring videos of people in the Botticelli hall and also outside of the Duomo. The number of people who rushed past the church and the great works of art, pausing only to take a quick Instagram snapshot was hilarious, yet heartbreaking. Never has this artwork been so easily seen and shared, and yet, perhaps, never has it been so under-appreciated. It was definitely a thought-provoking piece.

Unfortunately, we couldn’t spend forever looking at the works of Botticelli, because that same day we had a reservation for the Galleria dell’Accademia – home of Michelangelo’s David sculpture.

On Tuesdays, in the summer, the Galleria is open late and we had booked the last entrance time, 8:30 pm. We were right in thinking the crowds would be smaller and unlike our wait at the Uffizi, we were immediately allowed access into the Galleria.

I can honestly say, having been to the Uffizi earlier that afternoon, we weren’t all that impressed with the paintings inside the Galleria. There were some unfinished sculptures from Michelangelo that were interesting in comparison, but we had come to see what everyone comes to see: David. Larger than life and as impressive as we had expected, it was worth the 8 euros alone. 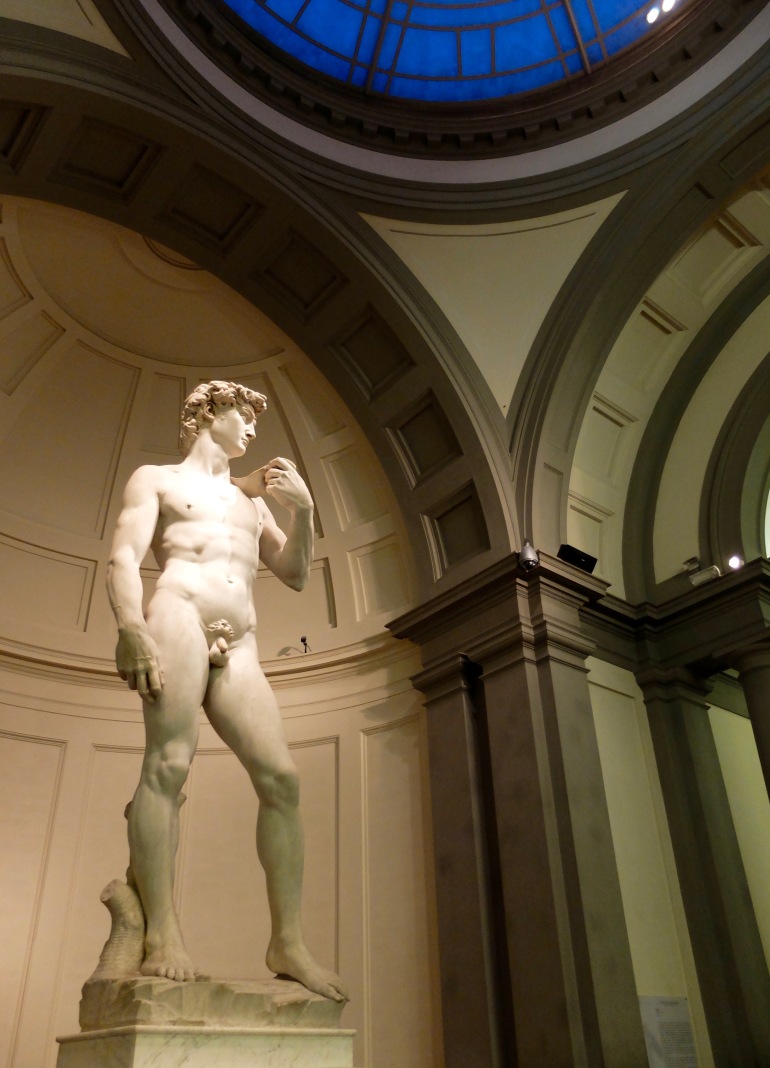 Other interesting exhibits included The Museum of Musical Instruments – home to the “Medici” viola, the only instrument in the world, among those constructed by Antonio Stradivari, still in its completely original state.

And the Gipsoteca Bartolini Hall – a recreation of Lorenzo Barolini’s gallery that was used by students in the Accademia delle Bell Arti.

Our final major indoor event was our trip to the Palazzo Pitti. Purchased in 1550 by Cosimo I de’ Medici, it symbolized the Medici’s power over Tuscany. Now home to a variety of museums: the Treasury of the Grand Dukes, the Palatine Gallery, the Royal & Imperial Apartments, the Modern Art Gallery, and the Museum of Costume and Fashion.

We didn’t explore every inch of the palace (it’s huge!), but we did have a wonderful time strolling through the Palatine Gallery: 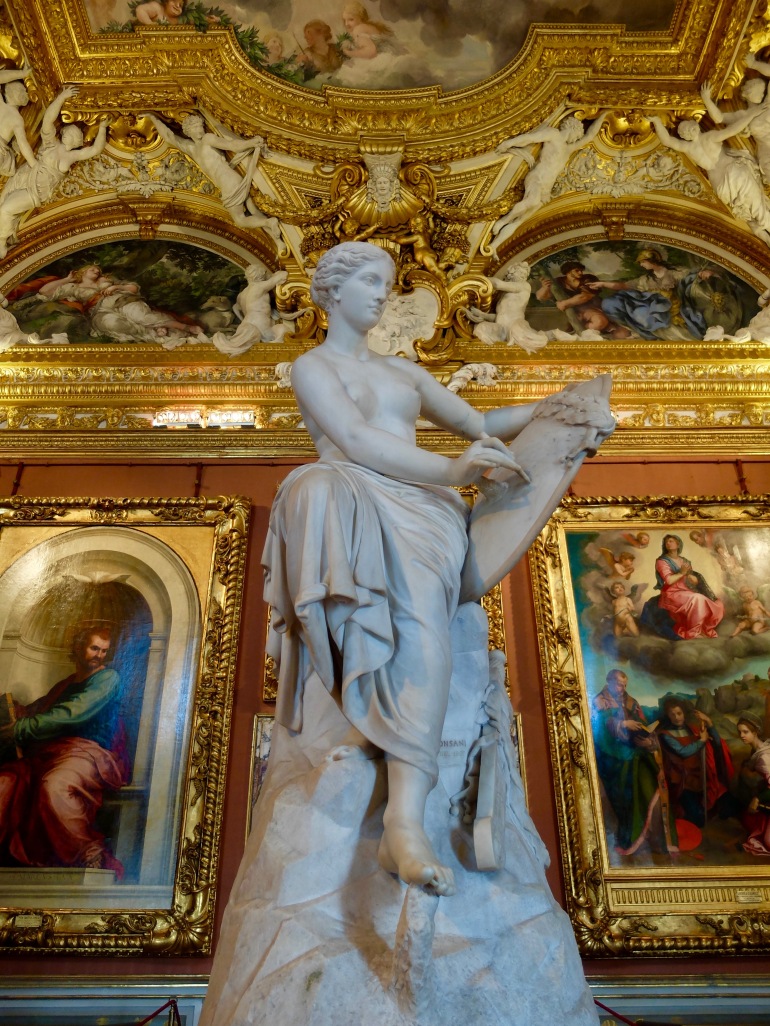 Between the statues, paintings, and gilded ceilings, it was hard to know where rest your eyesight.

Not only were the sitting rooms opulent, even the bathrooms had their own flair – including Bagno di Napoleono aka Napoleon’s Bathroom:

This was a lifestyle we couldn’t even imagine. And one that had taken place hundreds of years ago. These were my favorite rooms. However, Chandler made sure we spent plenty of time in the Modern Art Gallery as well (Neoclassicism to the 1930s).

But, like all our cities in Italy, the art and the scenery had to be interrupted by meals, and no meal in Italy is complete without a good glass (or bottle!) of wine:

The first photo having been taken in an excellent restaurant called Coquinarius, where the buttata ravioli with pistacchio pesto and gnocchi were to die for.

The second photo is of the wine cellar at Enoteca Alessi, where we found an incredible, small vintage production of Verdicchio and a well-known favorite of mine, a Brunello from Castello Banfi.

And just like that, our time in Florence, and Italy in general, was over.

Now that we’re back in Accra, I have a newfound appreciation for our muggy, 80-degree weather. And the rains that have fallen nearly every day are a pleasant reminder that we live near the ocean – even if I wouldn’t actually swim in it.

I’m sad to say summer 2019 won’t find us back in Italy, but I know I haven’t said goodbye to this country for good.