There’s so much to see and do in Cape Town, but I’m a sucker for cute animals, which means our day at Boulders Beach was easily one of my favorites.

Home to a colony of African penguins, these animals can only be found in South Africa and Namibia.

I checked the reviews of Boulders Beach on Tripadvisor and was surprised to find so many people who were disappointed with their visit. I started reading deeper. Every negative review stemmed from someone who went to Foxy Beach.

Foxy Beach is nearby Boulders Beach and there are boardwalks that take you to the edge of one the breeding grounds. There you’ll find hundreds of adult penguins, lounging around, and if you’re lucky, some pretty cute babies as well! 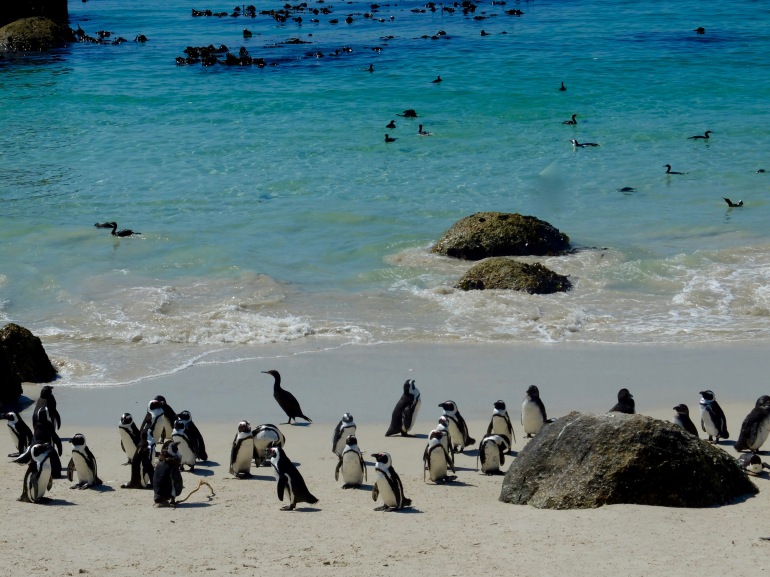 That said, the boardwalks can get pretty crowded and the distance makes it feel more like an open-air zoo. It’s a fun experience, but I’d be disappointed too if that was all there was.

Unfortunately, that’s all that many people venture to see. They arrive in a tour group, walk along the boardwalks, and then head somewhere for lunch. But the other end of the beach is where the real magic is.

The ticket that lets you onto the boardwalks is the same ticket that gives you access to the real Boulders Beach, just a few hundred meters away. Once through the gate, we took a short path to the beach itself. We were careful to come at low tide and we’re glad we did. There’s not much of the beach left at certain times of day.

At first, we scanned the beach, but all we could find were sunbathers and swimmers. And then, we saw our first penguin up close:

We saw this friendly fellow standing up above us on the boulders. He watched us and we watched him and then he decided to come closer to investigate. I thought I was prepared for the cuteness of the penguin waddle, but I wasn’t.

He got to the edge of the rock and then hopped down, making a beeline for us and then the water. After a brief introduction, he was on his way for his afternoon swim. There are signs up throughout the area, warning that the penguins can bite and you should be careful not to get too close.

I think people need to practice smart tourism, meaning no feeding or touching the penguins. But that doesn’t mean they aren’t just as curious as we are. And this photo was just the beginning.

We did a bit of boulder climbing (yes, in that dress!), and we found a larger part of the colony on 1st Beach. We also found more sunbathers, swimmers, picnickers, readers, and nappers. In general, people who wanted to spend more time with the penguins.

I was impressed. Of course, plenty of people (like me) were furiously taking hundreds of photos, but everyone was really respectful of the birds. And because of this, they waddled to and fro, not really concerned with our presence at all. 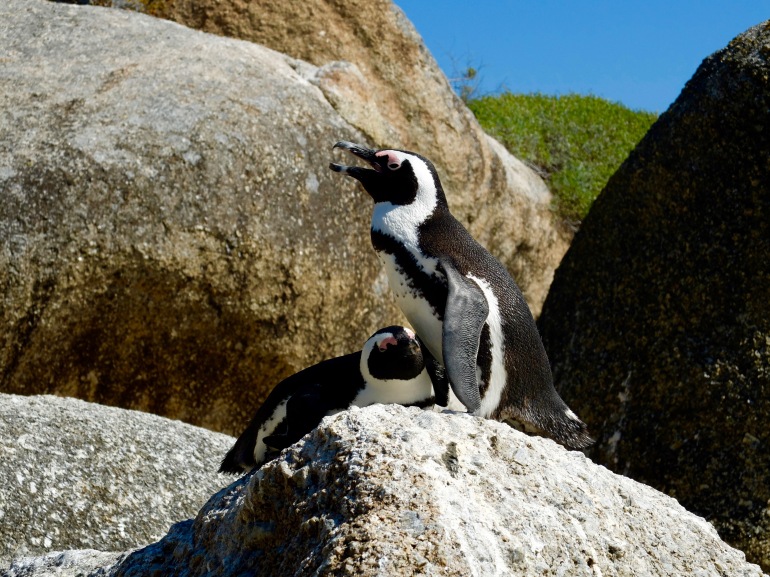 Some sunbathed on the rocks, while others waddled around pre- or post-swim. Their funny walk smoothly transitions into graceful swimming when they get into the water.

It was like we had found a penguin paradise. Everyone around me looked amazed. Part of me is sad about how many people miss out on this experience by only going to Foxy Beach, but another part of me was excited to find smaller crowds in this more intimate setting.

I had done my research and knew what to expect, but I couldn’t help but wish we had brought a picnic, to justify spending a little more time on the beach. That said, we got there fairly early, around 10:00 am, and I’m glad we did. When we were finally able to pull ourselves away from these adorable guys, there was a line of people waiting to buy tickets to enter the beach. 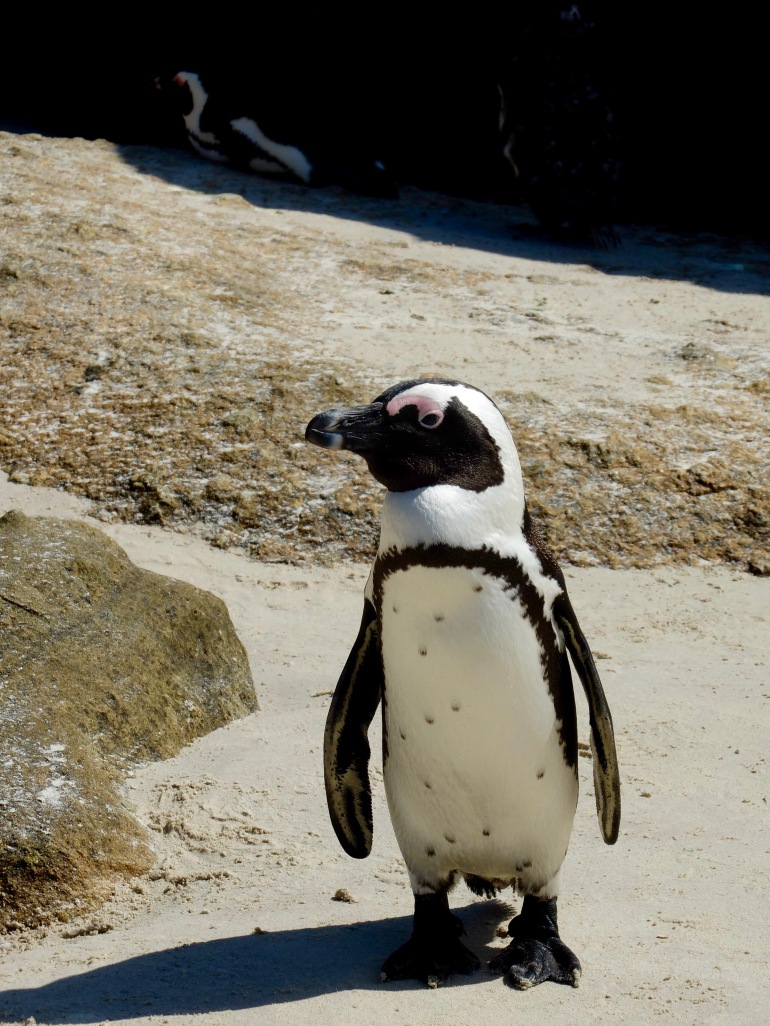 At Boulders Beach, you can even go swimming with the penguins as well. None of us could bring ourselves to enter the chilly end-of-summer water, so we settled for dipping our toes in instead.

That, however, wasn’t our only beach for the day. After leaving the penguin colony, we drove about 30 minutes north to Muizenberg.

Home to a vibrant surfing community, it’s also the location of Yoffi Falafel. Reviewed as some of the best falafel in the city, it did not disappoint. Plus, it was fun to watch the surfers and walk along the colored beach houses afterward. 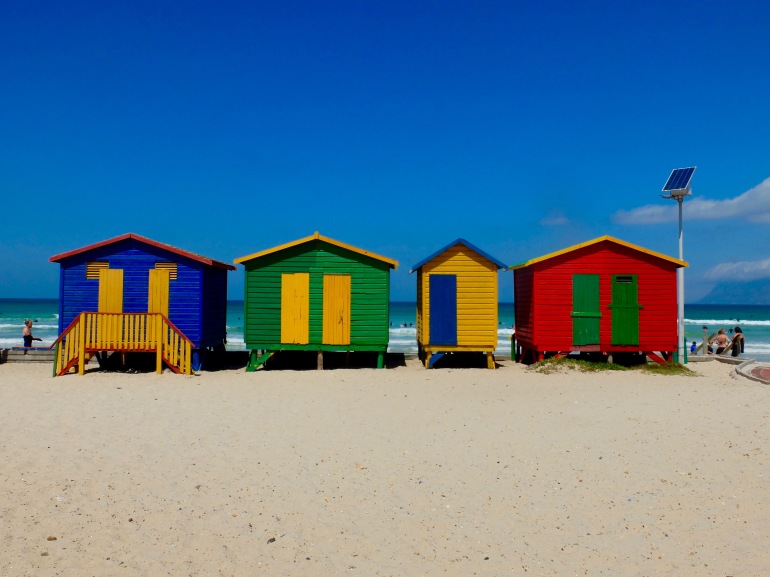 Once again, we couldn’t actually bring ourselves to dive in, but plenty of others did.

We didn’t spend long in Muizenberg, but it was a great stop after heading all the way down to Boulders. There are so many other cute neighborhoods to check out: Simon’s Town and Kalk Bay both warranting a closer look, but we have no regrets with our lunch choice.

During our week in Cape Town, we only made it to one other beach: Camps Bay. Recommended to us by our guesthouse, Blackheath Lodge, it was only a 15 minute Uber from our location in Seapoint. Known for its beautiful views of the sun setting over the water, there’s also a row of well-reviewed restaurants across the street.

We made our way across the beach, amazed at how soft the sand was. Perfect for swimming, if only, once again, the water was warmer! But that didn’t stop the littlest of children from running in and out of the water, squealing. Why are the youngest among us always the bravest?

We ran into some friends of ours at the beach and they admitted they had gone swimming earlier that day as well…and had made it all of about 15 seconds before running back to the sand themselves.

The weather was perfect, a slight breeze, but not cold enough to need a jacket. The four of us found a boulder large enough to fit us all and we climbed up.

Honestly, it was hard to know where to look. In front of us, the water practically glowed. However, behind us, the Twelve Apostles Mountain Range was changing colors with the setting sun.

It was beautiful and peaceful at the far end of the beach. Though even when we walked across it, we noticed it wasn’t overly crowded. There were a handful of other families also there to enjoy the sunset, but it was one of the quietest places we went during our time in Cape Town.

Sometimes, nothing beats a beautiful sunset at the beach. 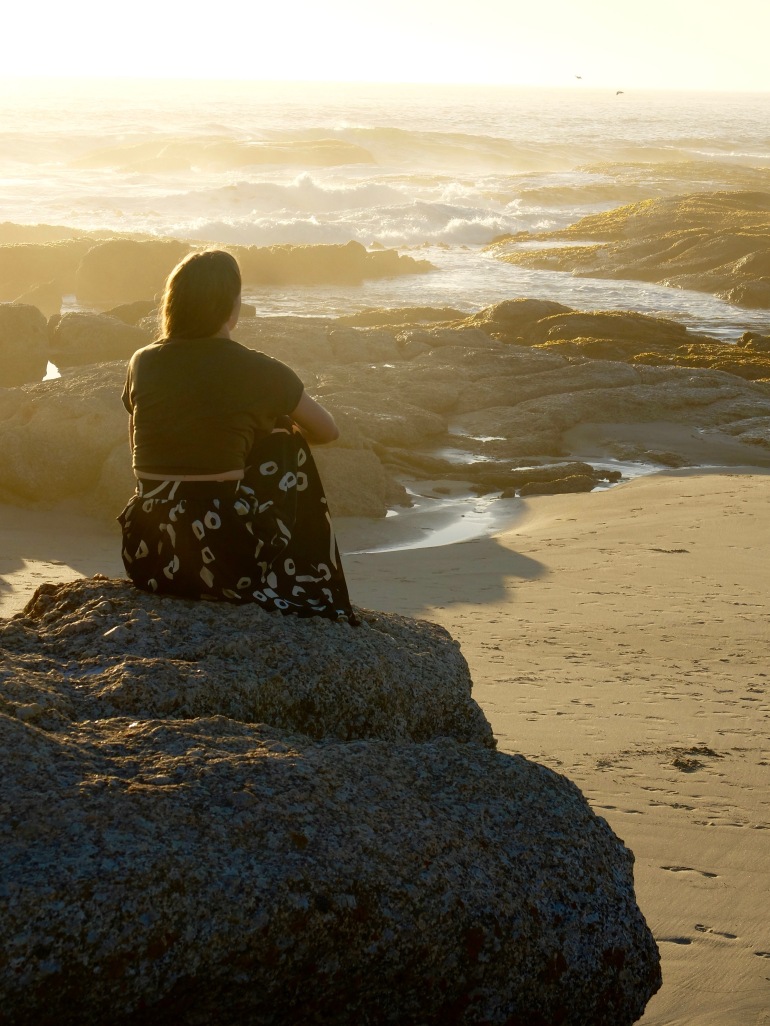 Except penguins…penguins win every time : )