The city of Cape Town amazed me with the diversity of activities you can participate in. In one day you could hike a mountain, swim in the sea with penguins, and go to the largest museum of contemporary African art in the world. However, I have to admit, the first and foremost reason we decided to Spring Break in Cape Town was for the wine!

We started in the heart of Cape Town at a winery called Groot Constantia. Founded in 1685, it claims to be the oldest wine estate in South Africa.

For 105 rand ($7.50 USD), you get access to the museum in the Groot Constantia Manor House (5-10 min tops), a guided cellar tour (which we left early, too industrialized for our taste), a souvenir wine glass, and wine tasting with a minimum of 5 wines. I say “minimum” because our host wanted to make sure at least one of us (we were a group of four that day), got to try every wine.

I have to say, the wine was good. Highlights for me were their Sauvignon Blanc and their Gouverneurs Reserve. With four other tasting glasses, I left more than a little tipsy!

The grounds were beautiful and we made sure to take a stroll before calling it a day. 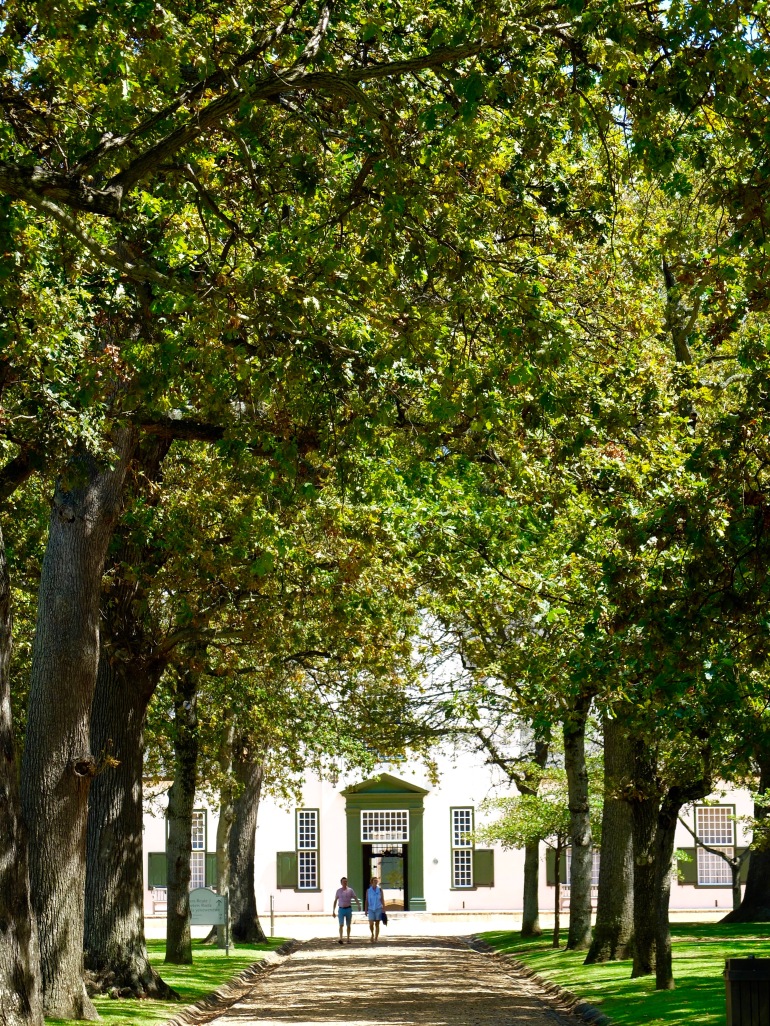 After four adventurous days in Cape Town, we were ready to retreat to the countryside and explore the wineries in Franschhoek and Stellenbosch.

Franschhoek, described as the “food and wine capital” of South Africa, began to see a rise in French Huguenot refugees in the late 1600s. They began establishing farms and brought their extensive wine knowledge with them.

Our first stop was at Haute Cabrière. The farm dates back to 1694, when the French Huguenot Pierre Jourdan was granted a piece of land, which he decided to name after his hometown Cabrière. In the early 1980s, Achim von Arnim, Cellar Master at Boschendal, purchased a portion of this land.

On the slopes of the Franschhoek Mountains, he found soil that reflected a similar type of terroir as Burgundy in France. In 1994, exactly 300 years after Pierre Jourdan first set foot on the land, Achim opened the Haute Cabrière Cellar. 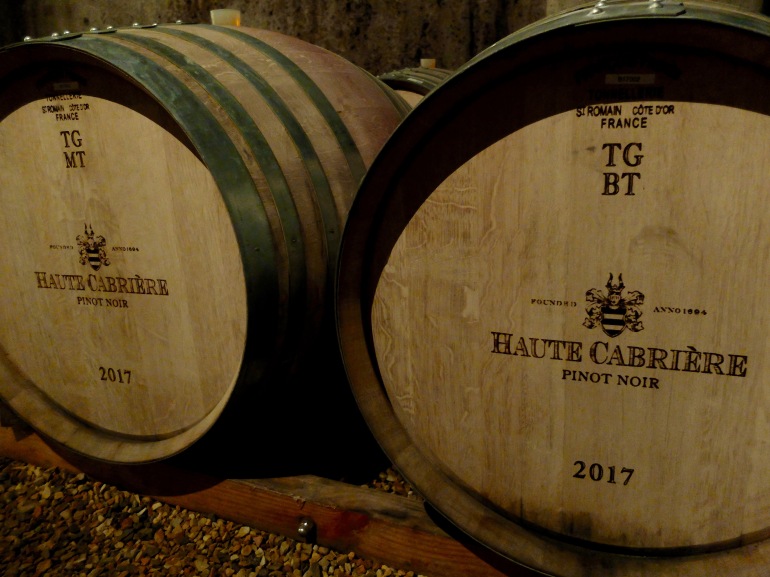 With a rather small selection of still wines, Haute Cabrière is well-known for their bubbly, sold under the name Pierre Jourdan. I typically tend to prefer Italian Prosecco to French Champagne, but their Brut is incredibly well done.

And for those who just don’t like bubbles, the Pinot Noir Réserve is quite good as well!

Not to mention the lovely countryside. We started with a cellar tour, which pretty much seemed like an ode to the still living Achim von Arnim. Rather eccentric, his personal paintings and poems line the walls and we were also invited into his personal drinking room, where the oldest and best wines sit waiting for the perfect occasion.

Then, our guide led us back outside to these views, before opening our Brut with a sword (not an exaggeration, he even showed us the scar he got the first time he tried!). It was an odd, but fun stop for the late morning/early afternoon (cellar tours start at 11:00 am and cost 90 rand or $6.25 USD and include 3-4 different tastings). 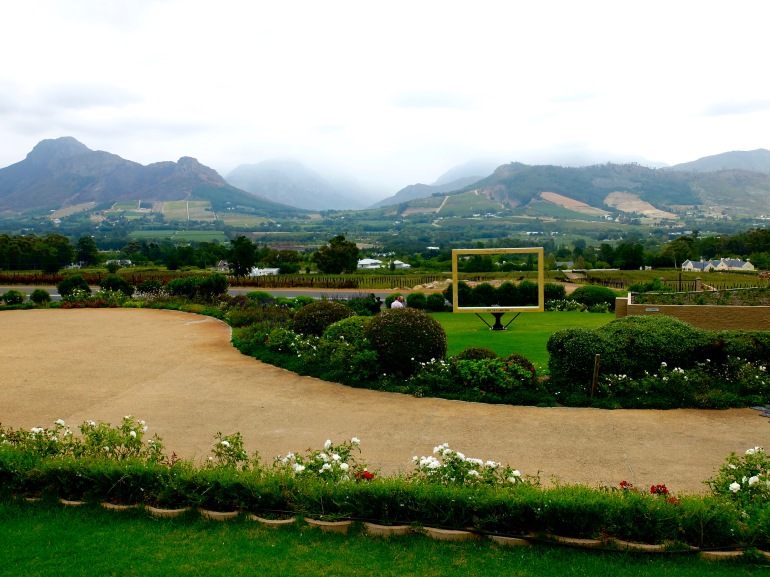 Afterward, it was time for lunch. And while Haute Cabrière is well-known for their food as well as their wines, we were dying to try the food at Foliage, a restaurant in downtown Franschhoek.

With a weekly menu that changes based on what’s growing around them (the restaurant grows their own microgreens!), we knew this was the perfect restaurant for us. Their organic wines paired wonderfully with our two-course meal. I can’t even begin to remember all of the ingredients, but needless to say, the meal was a flavor explosion! 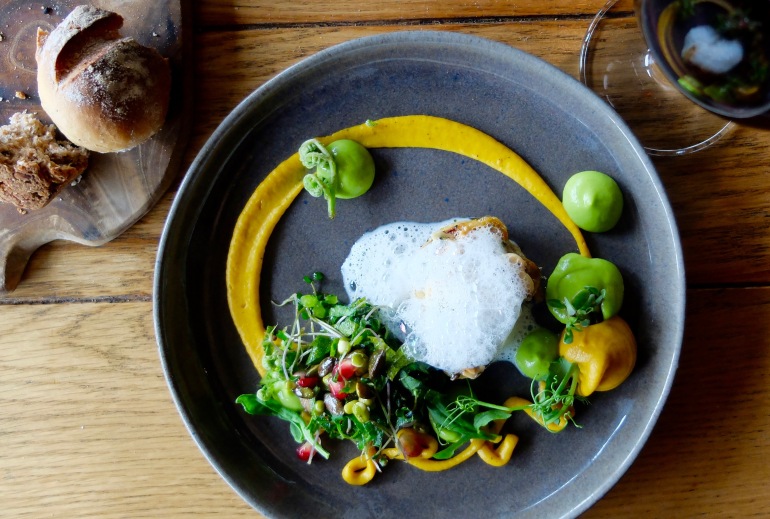 We can’t recommend Foliage enough to anyone coming to Franschhoek. That said, this was easily our most expensive meal during our week in South Africa. As long as you keep that in mind, you’ll have a great time! Many of their menu items contain meat, but they made sure to have at least one vegan and vegetarian option in each category.

After lunch, we decided to wander through the town of Franschhoek. Down to the Huguenot Memorial and into the various small shops along the main road. Then we found ourselves back where we started, across the street from Foliage.

We were standing at the door to Tuk Tuk Microbrewery. Chandler joked that despite all our wine (and we still had more to come!), a beer sounded great. We found ourselves heading inside. We were greeted by some of the friendliest servers I’ve ever come across, as well as a lively atmosphere.

Chandler started with the Amber Weiss and we ended with the tacos. Because, surprise! They served Mexican food! And it wasn’t half bad, either.

With a second lunch under our belts, we decided to make our way to our next winery: La Petite Ferme. Known as having a small and intimate boutique-style cellar, it also boasts some of the best views in Franschhoek. Or, so everyone says.

I emailed a few weeks in advance to see if we needed an appointment for wine tasting. The reply was that cellar tours required appointments, but we were welcome to come sample the wine at any time. However, when we arrived, the guard refused to let us in, claiming anyone who entered needed an appointment.

We were rather disappointed with this turn of events and the winery’s lack of communication between staff. Instead of making a scene, we opted to head to our final winery for the day: Spier Wine Farm.

We would be spending the next two nights there. Another of South Africa’s oldest wine farms, it’s history dates back to 1692.

Our rejection at La Petite Ferme ended up being a blessing in disguise. The grounds at Spier are lovely and we had a pre-dinner walk as the sun set. There were gardens all over, with a large variety of flowers and plants. 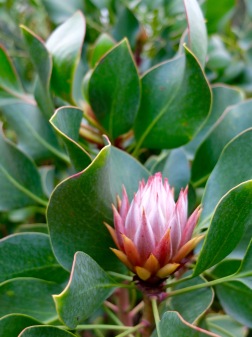 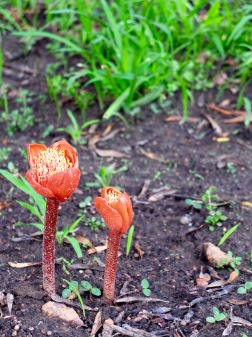 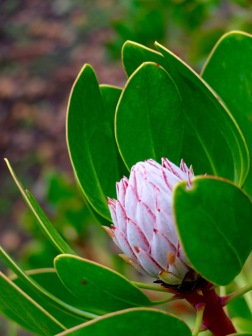 The estate is also well-known for encouraging and supporting local artists, so there were mosaics and other pieces of art throughout the grounds.

There’s even an Artisan Studio, which allows guests to see artisans at work as they create pieces in mosaic and beadwork in collaboration with South African fine artists. 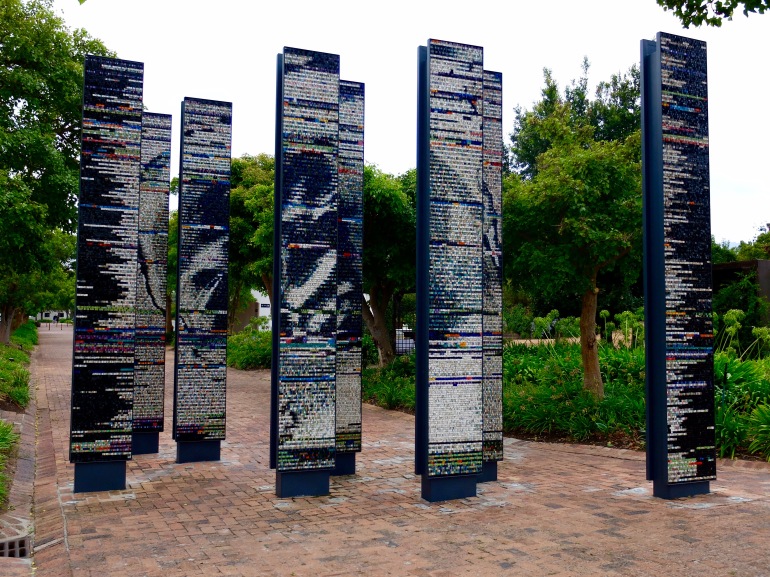 Even the buildings were stunning. The paths were abundant and easy to follow, the air was fresh and enjoyable to breathe. And it was nice to be on our feet after a day of drinking and sitting. 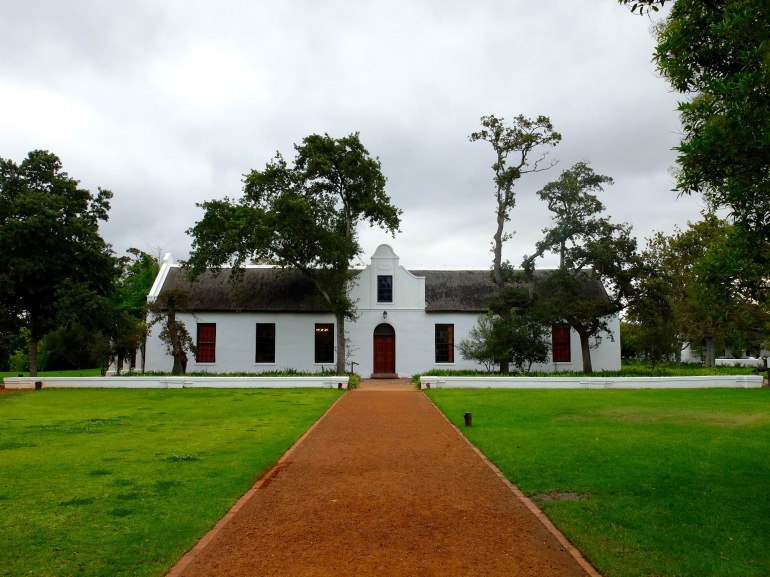 Our last stop was Eight Restaurant (there are five different eating options on the grounds!). They use natural and organic ingredients grown right on their farm. Chandler’s meal turned out better than mine, but the restaurant had a nice ambience and a great view right outside its doors. 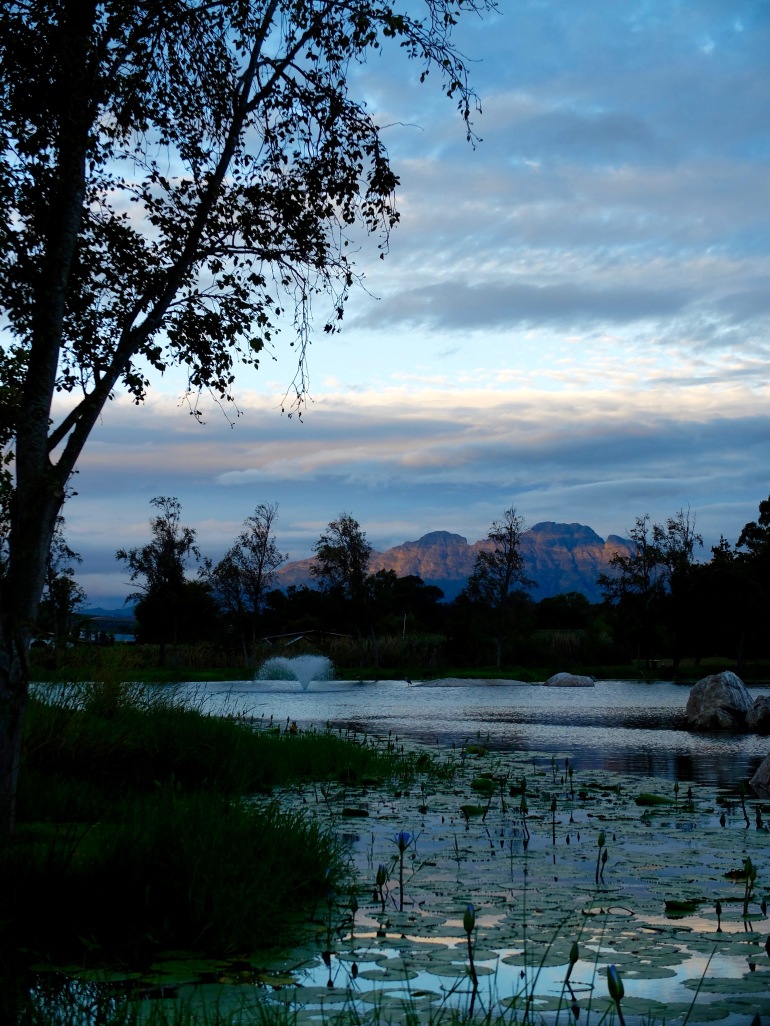 The rooms at Spier are nothing to photograph, but they are spacious and clean and honestly, I don’t know why you would stay indoors at a place as lovely as this. We woke up the next morning and had a leisurely breakfast at the Hotel Restaurant.

We were then able to borrow bikes from the hotel and explore more of the grounds. 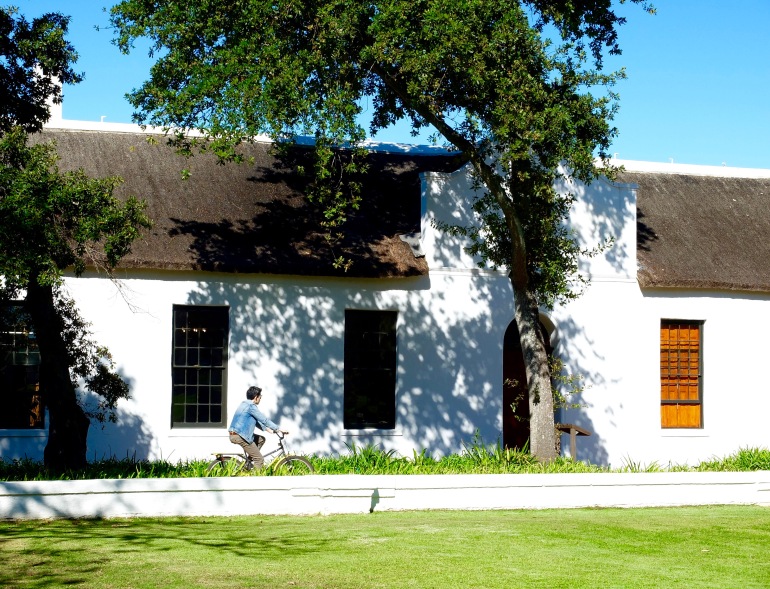 Our ride took us out past the manicured grounds and through wildflowers, toward the vineyards and near Eagle Encounters – a program that rehabilitates and releases birds of prey.

Knowing this was our last full day in South Africa, we couldn’t have asked for more scenic views or better relaxation. 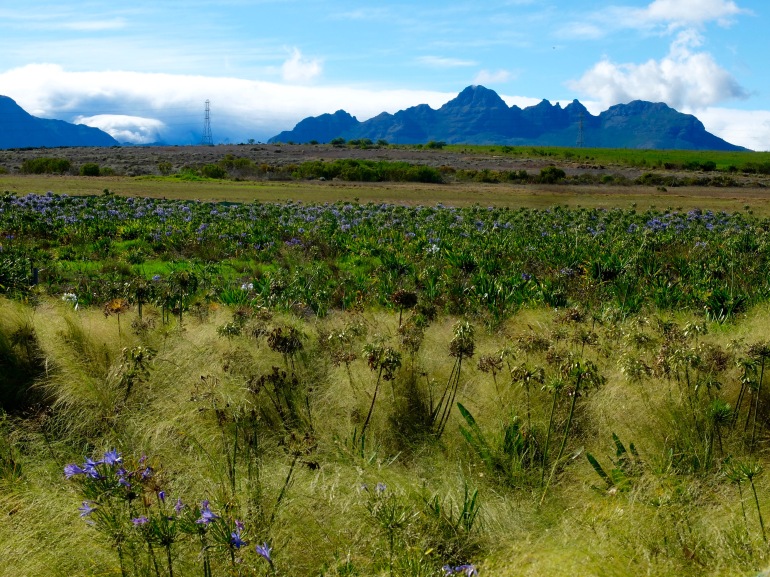 Tempted as we were to spend our whole day at Spier, we had one more winery I wanted to visit: Delaire Graff Estate.

Spier and Delaire Graff are both located in Stellenbosch, the second-oldest town in South Africa. There are more than 200 wine and grape producers in the region.

Known as “The Jewel of the Cape Winelands,” we immediately let go of any lingering disappointment about La Petit Ferme. Delaire Graff was easily the most stunning estate we visited in South Africa and that’s saying a lot, because they were all beautiful.

The driveway is lined with trees, local flowers, and statues and it immediately feels as though you’ve entered an oases. This next photo was taken from the carpark. The carpark. 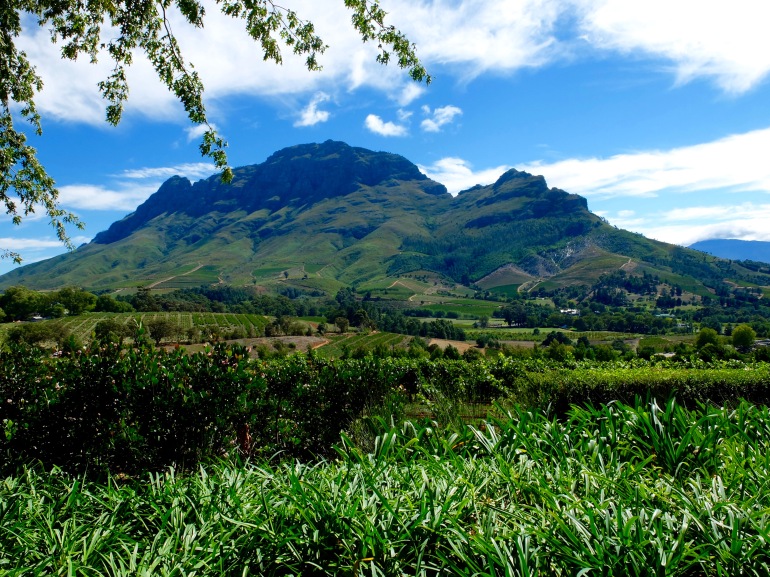 The restaurant was booked (weeks in advance), but we were happy just to sit outside and enjoy the wine (make sure you arrive early, we got there at 11:00 am, or book a table outside). The terrace was busy, but never felt loud. Our host was knowledgeable and also more than happy to let us mix and match and recommend the perfect wines for us. This was our most expensive tasting, but that didn’t really matter to us.

In my opinion, Delaire Graff had the best wines out of any winery we visited. The White Reserve blew me away, reminding me of the French whites I love so much. Other honorable mentions include the Sunrise Brut, Coastal Cuvée, and Botmaskop. 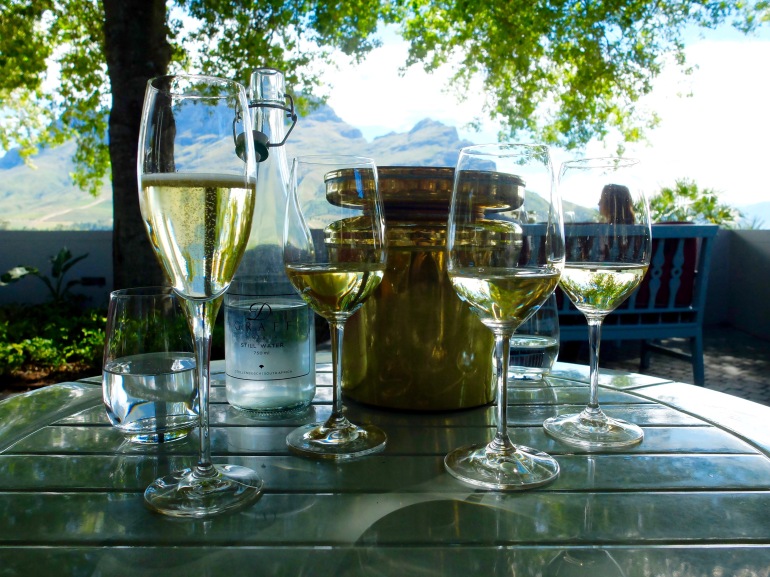 If that wasn’t enough, Delaire Graff is also known for their art collection. I found myself gazing at this piece that was hung right outside the women’s bathroom! While I have no regrets about staying at Spier, if we ever find ourselves in Stellenbosch again, we’ll be sure to spend a few nights here! 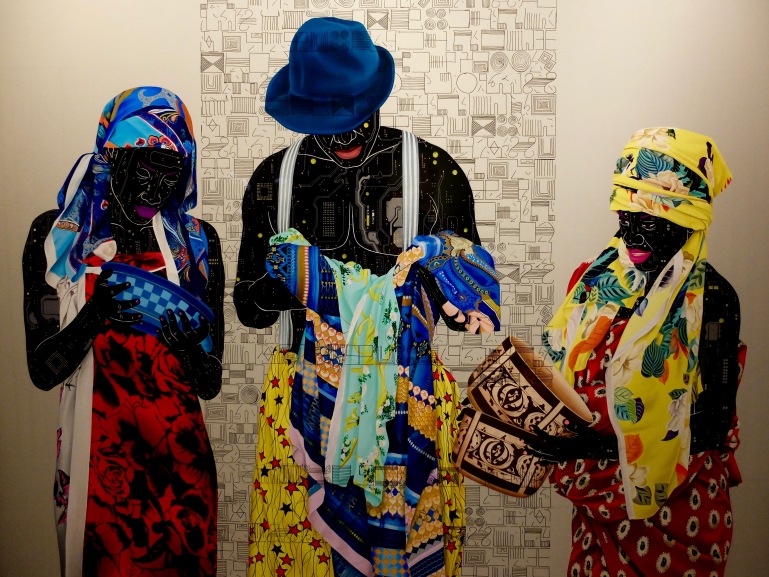 In order to walk off some of the wine, we went on a self-guided tour of some of the vineyards surrounding the estate.

The only other estate where we got this up close and personal with the grapes was Groot Constantia, back in Cape Town. 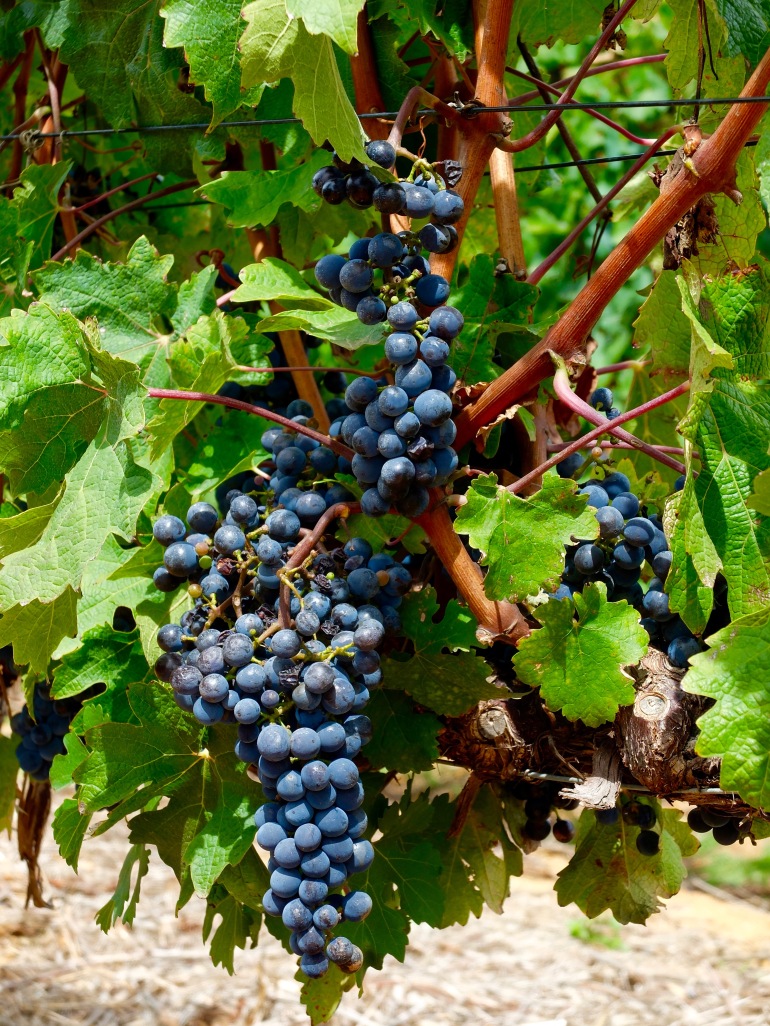 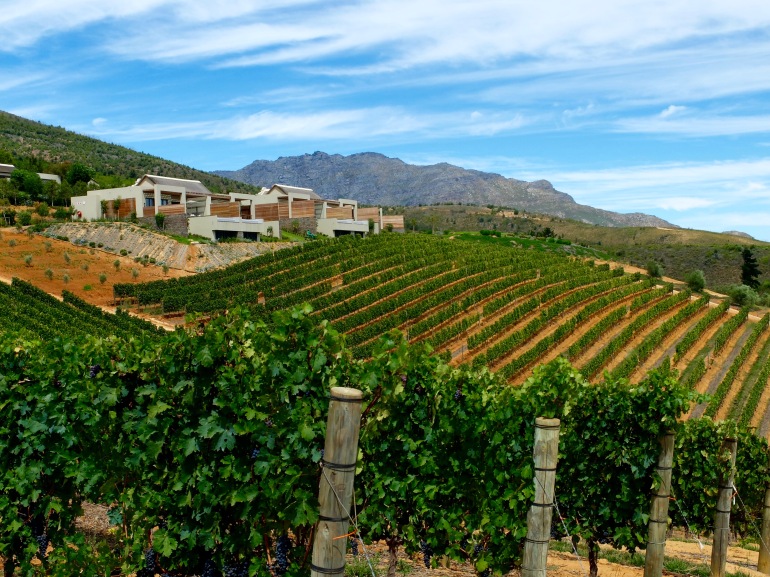 Before we knew it, we had spent most of the afternoon at Delaire Graff and it was time to return to Spier.

For our final evening of relaxation, we had our last wine tasting (40-90 rand or $3-6 USD). It was actually a bit of a let down. We had chosen Spier because it’s known for its organic wines, but only one, First Stone, is part of the tasting. We opted to buy another organic wine, the Chenin Blanc, and take it home with us…we just drank it last Wednesday : )

I also went to the Spa for a facial and massage. They use organic products and I can’t tell you how refreshed I felt.

We ended the night at a smokehouse. Vadas Smokehouse, to be exact. Also on Spier grounds. And you might think a smokehouse is an odd choice for two vegetarians, but this one specifically caters to vegetarians/vegans and has large portions of the menu available to us.

We definitely overate. But how do you choose between pizza, mac & cheese, not to mention all the tapas (I think we ordered four!)???

Cape Town was the perfect place for our Spring Break and the Spier Wine Farm was exactly where we wanted to end our vacation. 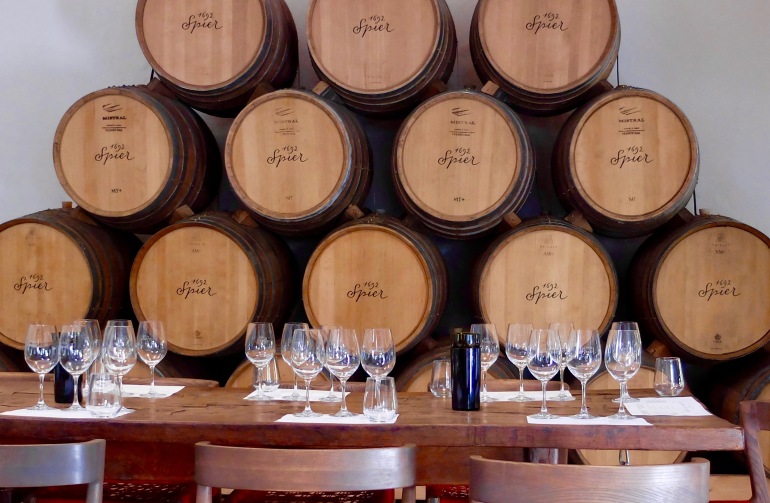