You know that feeling you get, when you know you’re about to do the wrong thing, but you do it anyway…that’s my relationship with Rome. I know I shouldn’t go, but I just can’t seem to keep myself away.

The first time I went to Rome I was 20 and I lived there for the summer. It was my first time away from North America and I felt so independent and free. I went with a group from my university, so while I didn’t know anyone per se, I had network of people with me.

I got to see all the different sides of Rome – touristy, homey, foodie. I fell in love with the architecture, learned when to avoid the tourists, and ate inordinate amounts of my host mom’s cooking. I also ate gelato for lunch nearly every day.

And because of that, I keep going back. First, in 2013 I met my mom and sister there on holiday during my time in Ethiopia with Peace Corps. It was still the city I loved and remembered, but it was busier. Dirtier. I honestly didn’t really notice it because I was so happy to be back, showing it to my family.

I went again this summer with Chandler. He’d been once before and wasn’t a big fan…”Aren’t there too many tourists?” “Haven’t you seen all the sights?” “It’s going to be really hot.”

I was determined to prove him wrong. And I’m happy to say, sometimes I did. But honestly, sometimes I didn’t. This post is about the times that I didn’t, though I have plenty of wonderful things to share from our trip later on.

I came across this article a couple of weeks ago: These Hilarious Photos Show What Iconic Tourist Attractions Actually Look Like. And while the Sistine Chapel made the list, there were plenty of other places in Rome that also could have made the cut.

While living in Rome, I walked through Piazza Navona every day. Usually twice. My bus dropped me off nearby and the quickest way to my school was to cut through the piazza.  At 7:30 am, I usually had the piazza to myself. Occasionally, I shared it with a street sweeper.

I took Chandler there at 10:30 am. Knowing that yes, the place gets pretty crazy at lunch and in the evening when the artists set up shop, but mistakenly thought we’d still be fine. 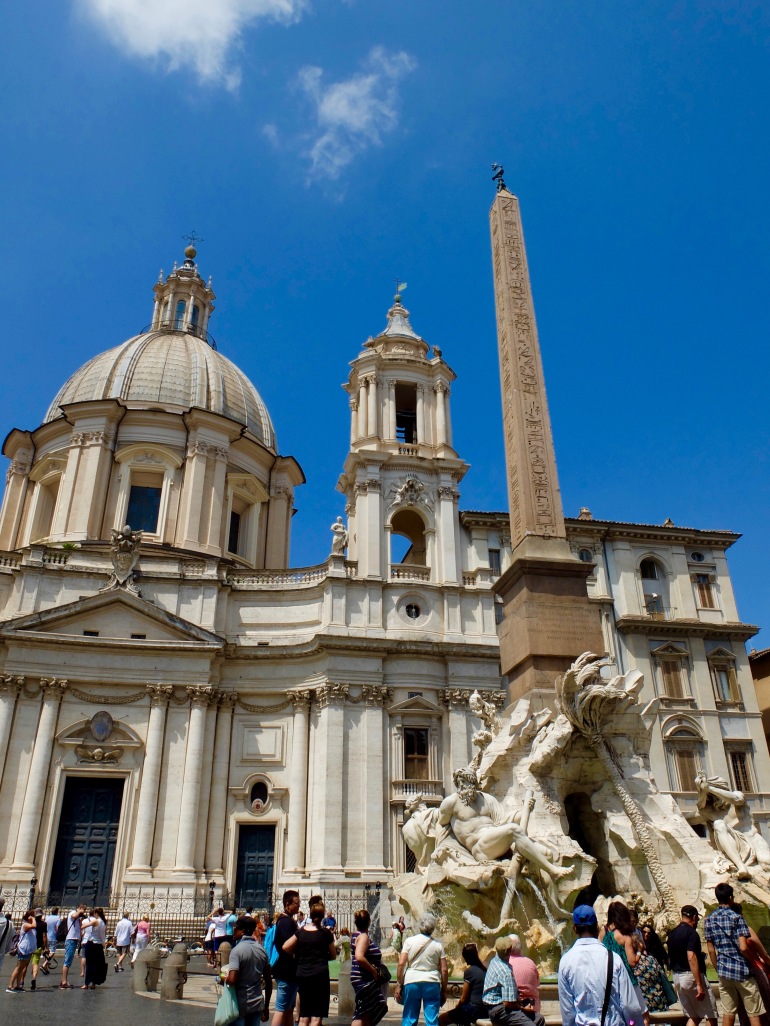 And Piazza Navona is hardly the worst offender when it comes to overcrowded places! Nonetheless, I’m never disappointed by the architecture in the square and the gelato shop around the corner. 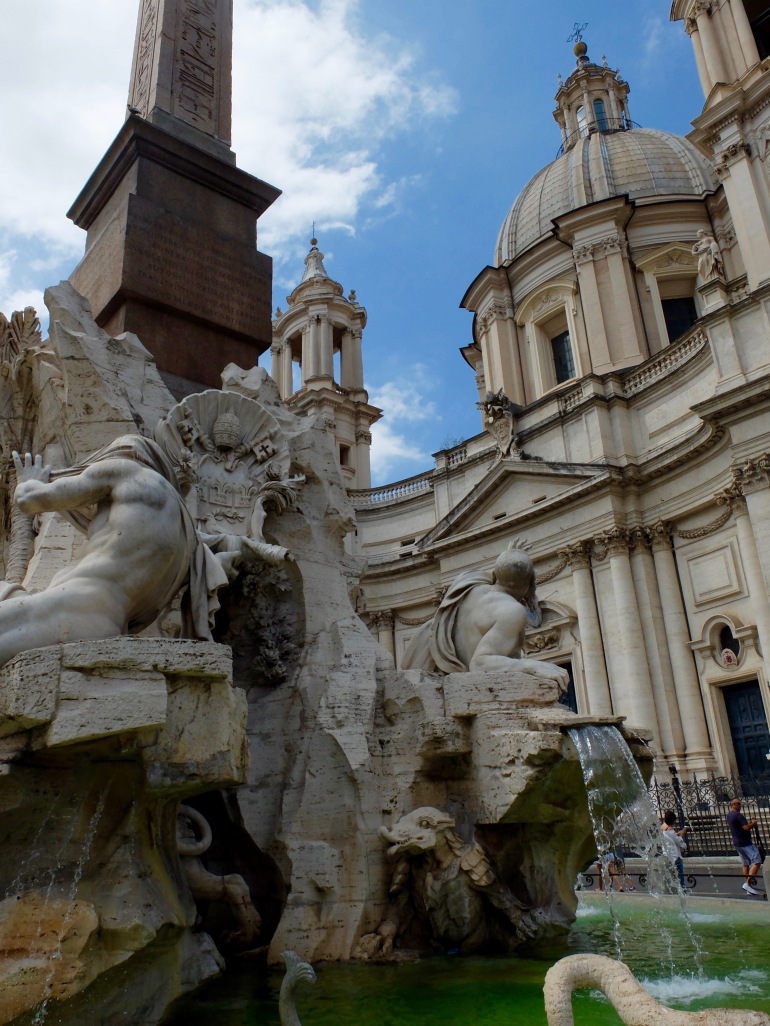 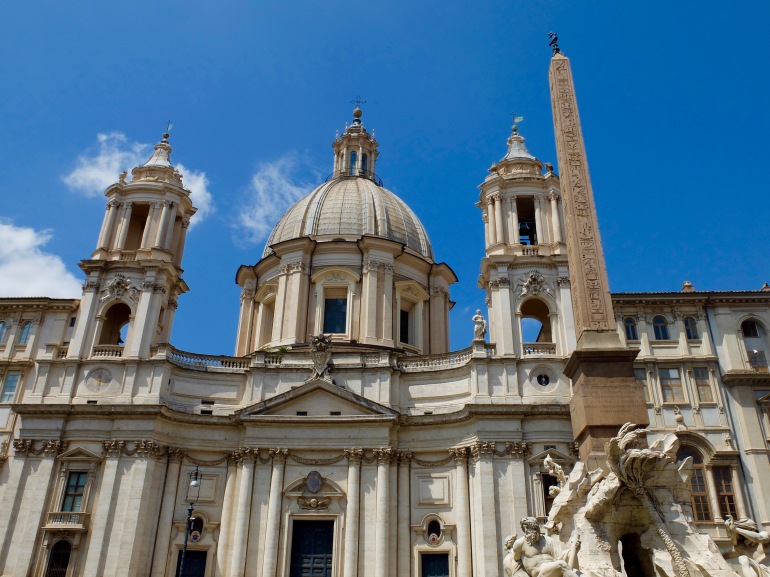 Other mistakes(ish) we made: Passing through the Pantheon on the way to an absolutely incredible (and Michelin rated!) restaurant. The food was tasty (OMG the appetizer!), but the piazza was, of course, nonsense. 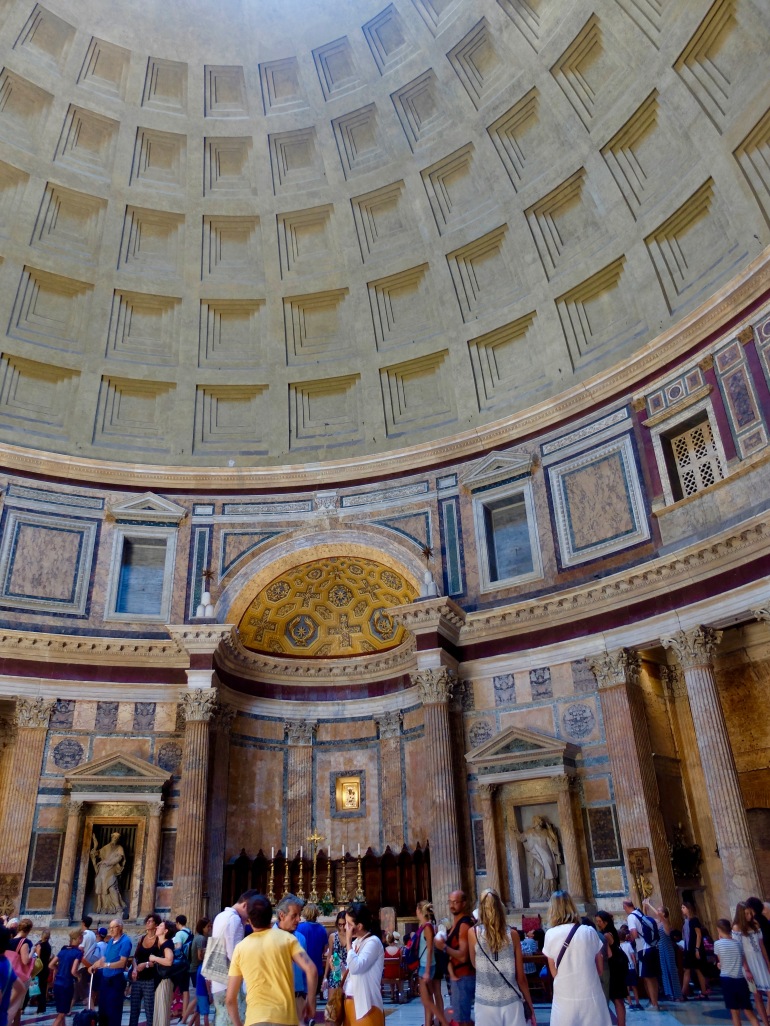 But, like usual, the architecture more than made up for the crowds. The worst was yet to come!

Chandler said we absolutely had to go to Vatican City – even though we’d both been before – he loves crossing off new countries that we’ve been to together. I didn’t make my way over here last time I was in Rome. I wasn’t all that impressed with the Vatican Museum my first time around and the gardens (which I’m sure are quite lovely) are private. But go we did, and wow, am I glad we weren’t trying to stand in line to get inside!

In 2010 I went to St. Peter’s Basilica to hear the Pope speak and my line wasn’t nearly as long! 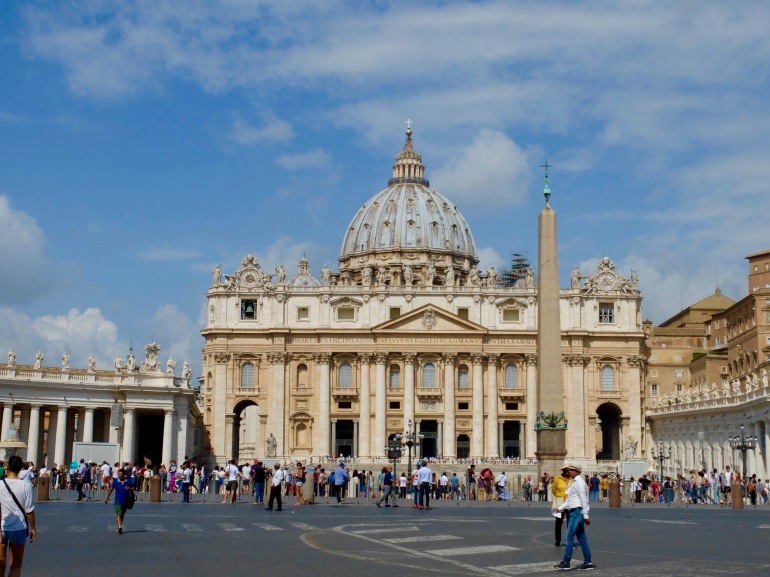 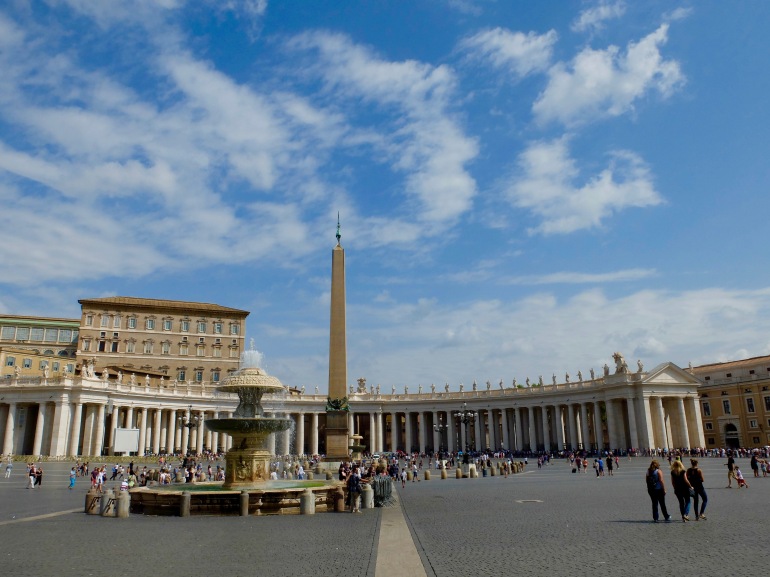 That said, Vatican City is just large enough that you can still find some secluded spots to rest your feet in peace. 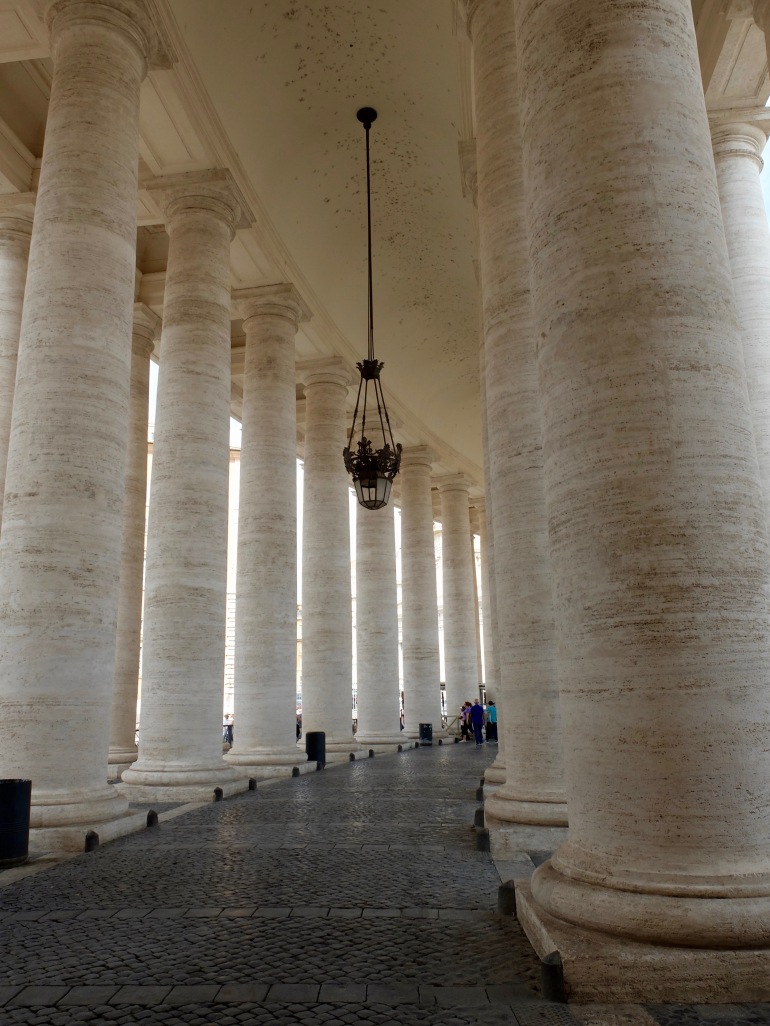 This next one was an open mistake before we started. I had made countless wishes at the Trevi Fountain in my youth and knew from the previous crowds we’d seen that this would be a circus.

Problem was, we were thirsty and our water bottles were empty. We were at the nearby movie theater (Chandler hadn’t been to a show all summer and it was killing him). The theater itself was quite lovely and modern. But we started making our way to the Trevi Fountain, sure we’d find a fountain beforehand to fill up at.

The closer we got the more crowded it became, until the idea of personal space disappeared. At one point, I think I had to jump out of the way so that someone with a gelato cone right up in their face didn’t walk into me.

And then we arrived at this: 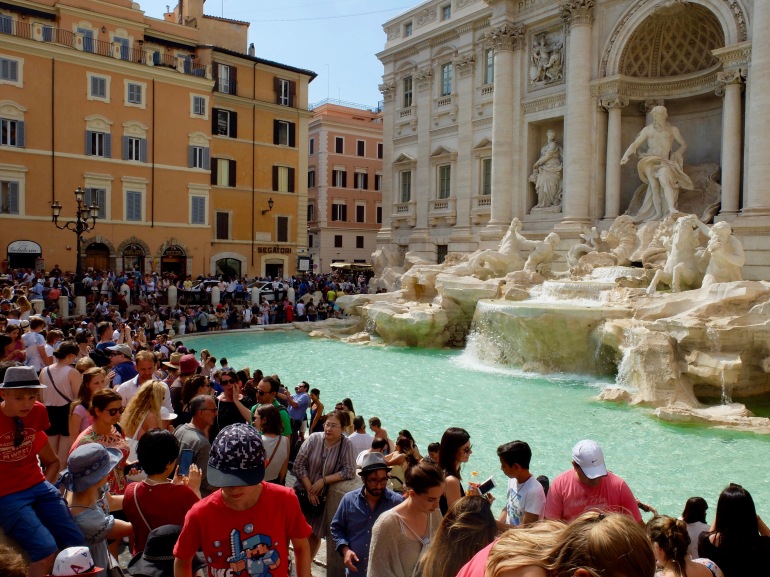 Ready to make your wish? And honestly, it was this photo that got me thinking of the article: These Hilarious Photos Show What Iconic Tourist Attractions Actually Look Like. Because, just like everyone else, I also zoomed in and took the following shot. But honestly, it just doesn’t do the place justice like the first one.

But the worst, and I mean absolutely worst, place in all of Rome is the Colosseum. I went inside in 2010 and didn’t feel the need to again in 2013 or this summer, but wow. And it’s not just the people. There are so many tour buses, regular buses can’t always make their scheduled stops.

We learned the hard way when we got off one bus nearby and walked over to catch another, only to wait over 30 minutes (for a bus that supposedly comes by every 7-10 minutes). And I’ve been in Rome on bus strike days, I think some buses just create new routes away from the Colosseum! We ended up walking to our next destination instead. One of the first places where we were truly alone (or, as alone as you can be in a city of over four million).

But I’ll share that gem in my next post. For now, I’m happy to reminisce about my third trip to Rome, but I’m equally happy to be back at home in my quiet apartment.